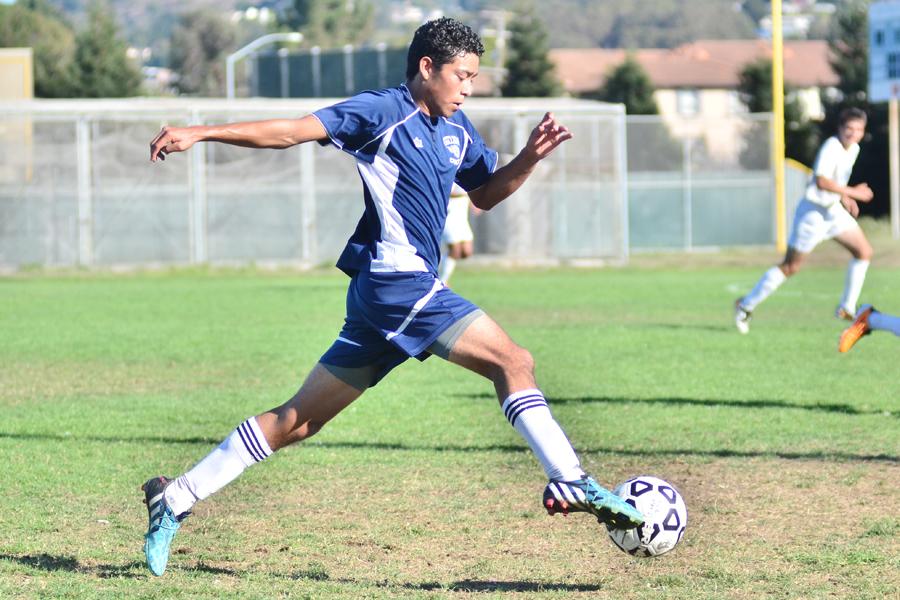 Comet winger Missael Hernandez strides down field with the ball during CCC’s 3-0 win against Folsom Lake College at the Soccer Field on Friday. Hernandez used his quick pace to create attacking options for the Comets.

Two second half goals prompted a late Falcon offensive surge that a well-positioned Comet defensive backline contained to seal a shutout victory at the Soccer Field on Friday.

Folsom Lake (1-2-0 in the BVC, 2-8-1 overall) failed to contain Contra Costa College’s attacking players, who repeatedly used their speed to find the filtered forward passes in the attacking third during quick breaks along the wings.

The Comets contest against FLC was a physical battle for possession in the midfield. CCC ended the game with 13 fouls to the Falcons 17.

At 24 minutes, the Comets took a 1-0 lead when center midfielder Ivan Marin fired a right footed volley from 22 yards out from goal.

He rifled the ball from the left edge of the penalty area to the inside of the far post, past the out-stretched arms of Falcon goalkeeper Patrick McDade who ended the game with four saves.

By halftime, the Comets outshot the Falcons nine to four. CCC also boasted three corner kicks to the Falcon’s zero.

At 65 minutes, Comet left midfielder Missel Hernandez concluded the final score when he tapped in a rapid ground cross, delivered by striker Bryan Vega from the right wing, at the far post to score.

This final goal scoring play developed when the Falcon attack was cleared yet again by a virtually impenetrable Comet backline.

Falcon center back Logan Guler said his team was too slow to compete with the fast pace of the Comet players.

“Most of the time we were outnumbered (in the midfield) and too slow,” Guler said. “I would have liked to have seen the energy we showed in the second half during the first (half).”

Falcon coach Martin Roberts said they created more chances on goal because of a formation switch from a 4-3-3 to a 4-4-2 that focused attacking plays down the center of the field.

“It was a different game in the second half,” Roberts said. “We were more successful moving the ball. Our players were concentrated more in the attack and our motivation rose.”

Before Hernandez scored, the Falcons’ attacking players had already taken six shots, more than FLC managed to get throughout the first half.

Roberts said, “However, when you are in an attacking position for as long as we were without scoring you become susceptible to the counter attack. And we let go of two quick breaks.”

Most of the Falcon shots were blasted wide or blocked by Comet goalkeeper Stephane Vanier, who ended the game with eight saves.

CCC center back Bradley Alman said the Comets played more defensively during the first 20 minutes of the second half.

“To a certain degree we want to invite a little pressure into our defensive third,” Alman said. “Then we break them on the counter (attack) and we saw two good goals come from it.”

Marin received the loose ball in the midfield and sent a diagonal forward ground pass toward the right sideline to Vega, who was already striding toward the end line out in front of the FLC defenders.

“I had been caught offside a few times by the (official) during the game but that last one was a perfect play,” Vega said. “To get in behind the defense and into open field during a play is just like how we practiced.”

Hernandez had made the run toward the far post when he also noticed the offside flag but remained pointed at the sideline.

Vega was awarded a penalty kick when his shot on goal, inside a crowded penalty area, was deflected by a Falcon defender’s hand at 52 minutes.

Vega nestled the ball into the right side of the goal from the spot kick to bring the game to 2-0.
CCC ended the game with 13 shots to the Falcons’ 11.