Day of workshops highlights importance of voting in local elections 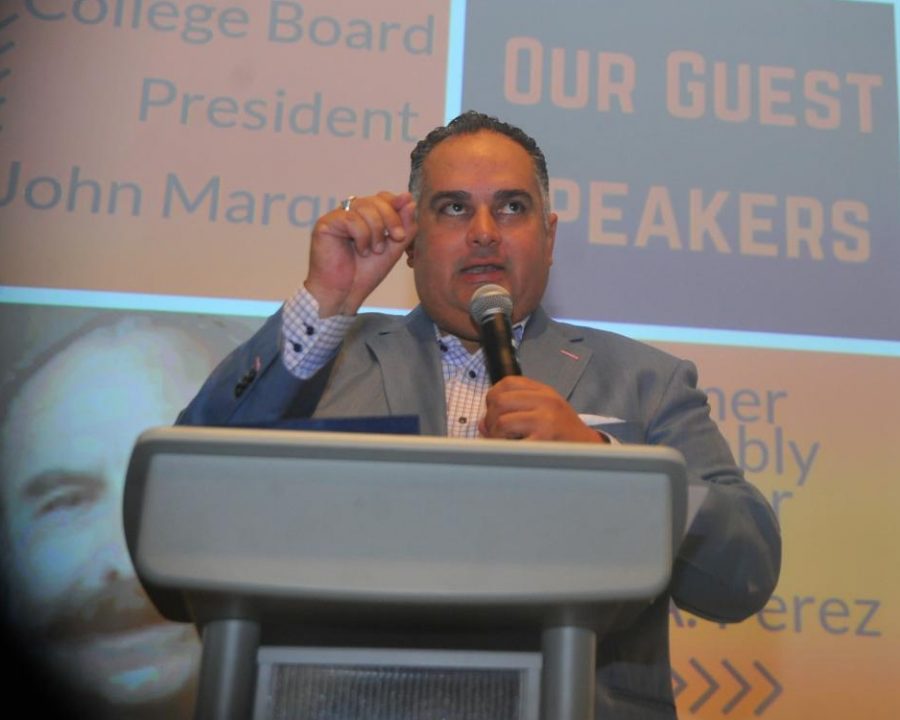 Former state Assembly speaker John Perez urges youth to get involved in the voting process before the age of 21 during a voter education summit in GE-225 lecture hall on Saturday.

A day of voter information and workshops was held on Saturday in the General Education Building highlighted by the turnout of many local elementary, middle and high school students.
The event consisted of local city and county officials partnering with local minority groups to raise awareness for those in West Contra Costa County of the importance of voter turnout — not just in 2018, but beyond.
Co-organizer of the event Doreen Moreno said, “There are community leaders who partnered up with Contra Costa College, specifically with the METAS program.”
The leaders plan to communicate the importance of voting while getting involved to participate in the democratic process, and to increase voter turnout of Latinos and other communities of color.
“This event has been in the works for three months now, but we are hoping to use this as an opportunity to get our local minorities involved in voting,” Moreno said. “We want this not just in 2018, but into 2020 and beyond.”
The focus of the event was to inform and educate families in the community and to bring awareness of the importance of partnerships between local officials and their constituents.
Contra Costa County Supervisor John Gioia told the assembled, “As children and teenagers you should not be ignorant to the fact that you have influence on your parents.”
Many students from local high schools, such as Richmond, El Cerrito and Hercules, were present to hear the supervisor speak words encouragement.
The parents of these students were also the focus of that encouragement.
Co-organizer of the event, Oscar Garcia, said, “Being that Richmond is about 40 percent Latino, voter turnout among this next generation and their parents would be a game changer.
“Imagine 40 percent of the community showing up at the polls and making their voices heard. We are hoping to use this community college as a centralized location with influence for Hispanic and minority voters.”
State Senator Nancy Skinner spoke, before introducing former State Assembly speaker John Perez, about impacting the polls by having active Latino and other minorities participating. Citing examples from Governor Jerry Brown’s most recent election campaign, she said the reach of having silent voices heard is starting to be understood by many in the Democratic Party.
“Governor Brown, to his credit, understood that it was the Latino vote that made the difference in his election,” Skinner said.
Influence as citizens, whether in legal standing or not, was a topic that Perez spoke to when examining the importance of civic duty.
He said the legal standing of a person’s citizenship should not define whether someone is a good citizen.
“What is citizenship? Especially for a lot of us in the Latino community, it is a charged word that gets used a lot of different ways,” Perez said. “The modern interpretation is one that has the rights and privileges of a free person. The ancient Greeks had a slightly different understanding. It was a person who had a special relationship with the state.”
According to Perez, cultivating this relationship between both the citizens of a community and the state, should be a dynamic process involving both those citizens and their governmental leaders.
Moreno said she is hoping this event will spawn many more of its kind in the future so that the next generation is ready for its civic duty.