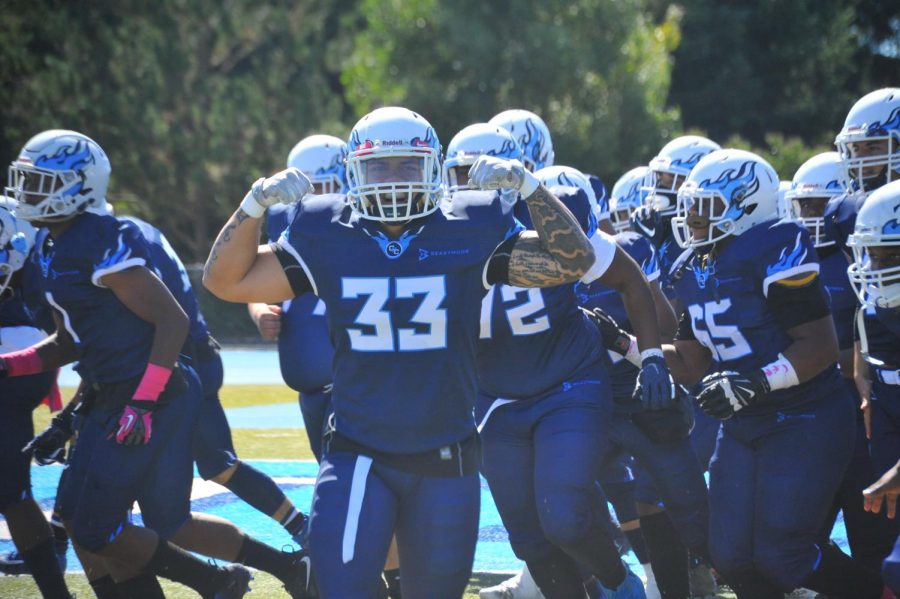 In the span of a student-athlete’s career, almost every single one will tell you about an instance when they found themselves changing their outlook on the field and in life.
After coming to Contra Costa College over the summer, 20-year-old linebacker R.J. Ma’ae found himself changing the way he dealt with being coached on the field.
“When I first got to CCC, I felt like I knew it all. I already had a fixed mindset,” Ma’ae said.
By allowing himself to be coached, he made positive strides in all aspects of his life.
Shortly after arriving in San Pablo, the linebacker said he would argue with coaches here about schemes. However, he soon realized the common philosophy that “coaches coach and players play.”
“The coaches here have shown me a lot and they have made me a coachable player. Ever since then, my game has improved,” Ma’ae said.
These kinds of realizations are what help students-athletes mature on and off the field.
Assistant coach Tim Johnson said, “Right now, just seeing him evolve as a person, more so than a player, is the biggest thing I can be proud of.”
He said Ma’ae’s trust issues on the field earlier this season were evident, but as the season progressed, he has been “100 percent behind his teammates,” even when he’s not in games, Johnson said.
Coach Pat Henderson attributes Ma’ae’s personal growth to his commitment toward trying to make something out of himself.
“I’m glad we were able to make this happen for him. He’s a good young man and very passionate. I know he wants to make something out of himself and we appreciate having him here,” Henderson said.
As an alumnus of Archbishop Murphy High School (Everett, Washington), Ma’ae had an impressive season his junior year which garnered the attention of many university scouts.
“I was looking good that year. Then, right before my senior year, I broke my ankle playing rugby in the summer. So, I didn’t play football in my final high school season,” he said.
Ma’ae said he moved to California in 2016 after he graduated high school to play at the community college level, because his injury brought an abrupt end to his senior year.
“I moved to Cali to play JuCo ball,” Ma’ae said.
He said that he attended Santa Rosa Junior College right after he moved south and then he spent last year at City College of San Francisco.
He decided not to play football at either school.
During his time at both colleges Ma’ae was working to get some things straightened out in his life.
What brought him to CCC was a family member who connected him to this college.
“It’s funny because my uncle’s high school coach is the line coach that recruited me here,” Ma’ae said.
Johnson said that he is proud of the person Ma’ae is becoming and how he manages to still show his personality.
“His personality is kind of in-your-face, but you can tell he’s passionate. He’s learning every day and getting to know the linebacker position,” he said. “He has a fun personality during games. You can tell how fierce of a competitor he is and how much he wants to win.”
Ma’ae said that he just wants to get an opportunity to play at the four-year level to pay for his education.
He will be getting his associate degree in social behavioral sciences in December.
“Football has always been in my family,” Ma’ae said. “My ultimate goal is to attend a four-year university. It doesn’t matter if it’s not a Division 1 school, I just want my education paid for.”
The maturing process that he has undergone at CCC is an example of the many ways junior colleges affect the lives of students.
“When he (Ma’ae) first got here you could see that his temper was a little up there. As the season has come along, he has calmed down a lot and he’s buying into the philosophy here,” Johnson said.
“(Now), the sky’s the limit for that guy.”
The level of appreciation that Ma’ae and the coaches have built for each other is unmatched.
They will continue to fight until the end of the season to obtain their goals of winning games.