County health department urges public to get a flu shot 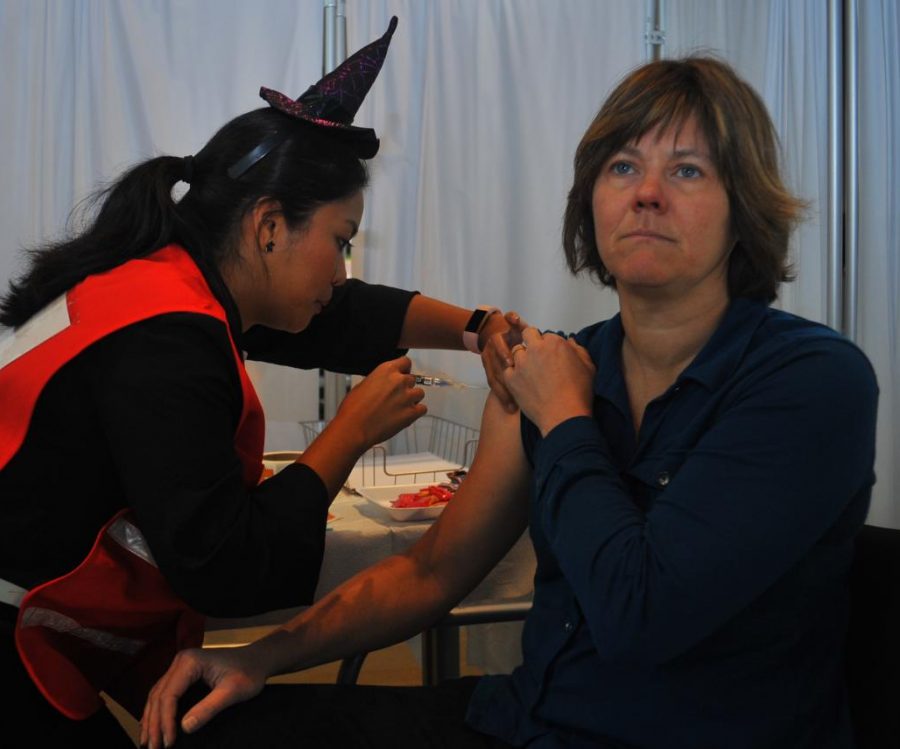 After a record-breaking flu season last year, punctuated by numerous fatalities, the Contra Costa County Health Department and Contra Costa College have teamed up to fight off the influenza virus more commonly known as the flu.
In a span of four hours, 115 flu shots were given to students, faculty and administrators at a free pop-up flu clinic run by a county health department staff of around 25 nurses, health investigators and volunteers in Fireside Hall on Oct. 30.
“Flu season starts Nov. 1 and we try to get as many people vaccinated as we can before it gets here,” Contra Costa Health Department spokesperson Louis McKnitt said.
“We have a total of 400 doses available today,” McKnitt said at the start of the event. Toward the end of the event, she said the flow of people was not what they expected. “There was not a huge amount of people — we could have handled more.”
CCC Director of Marketing and Media Design Brandy Howard said, “Last winter the flu season was particularly bad for young people. There were a lot of reports of people in their 20s dying of the flu and that is not the norm.”
According to the Center for Disease Control, the 2017-18 flu season was the first season ever to be classified as highly severe across all age groups. It was also the longest season in recent years, lasting 19 weeks at or above the national baseline.
Howard said, “In our community there potentially are a lot of folks that don’t have health care. So, if we can do anything to keep our students and their families healthy, we wanted to make sure we did.”
Jason Andel, a public health nurse from the Contra Costa County Health Department, said flu shots protect people from different strains of influenza that arrive in a given season.
Every season, flu strains evolve which makes it a necessity for a person to get a flu shot every year. Andel said,
“The people (he gave a flu shot to) were all OK with it. Some were a little scared, but in the end nobody cried. So, it was good.”
The 115 people that got the shot were greeted at the door, shown to a chair and asked to fill out a screening form. After filling out the form and turning it in, a nurse would give them their shot.
McKnitt said that the process went smoothly and students were able to get a flu shot within 10-15 minutes of entering Fireside Hall.
Public health major Karen Vargas said, “I am here to get my flu shot because last year I got the flu really badly after not getting one.” She does not currently have health insurance so having CCC provide this service could be a lifesaver for her and others.
She said prior to having a really bad bout with the flu last year, she had never had a flu shot.
“I was scared of the side effects,” she said. She said she heard too many cons to consider taking the injection.
“They say you can get aches and it can get you really sick.” Vargas said many people in Hispanic communities are skeptical of the benefits of flu shots and discouraged her from taking it.
Vargas said, “When I became a public health major, I started to weigh the pros and cons of the flu shot — the pros outweigh the cons by far.”
Vargas said she is optimistic about her health this flu season and will make sure her family and community know the benefits of choosing the vaccine.
Although the impromptu flu clinic did not reach the 400 flu shot mark it set out to accomplish, Howard said, “I think 115 flu shots is great when you think of the ripple effect and the safety it creates.”
She said since this was the first year CCC hosted the flu shot clinic, they didn’t know what to expect as far as results. She said there is an immediate impact this flu clinic has in that the flu clinic participants will be going back to their communities healthier and less likely to spread the virus.
Howard said, “The flu clinic was successful because of two reasons. A, the campus is aware that this type of event can be done here and, B, it helped form the start of a partnership with the county health department.”