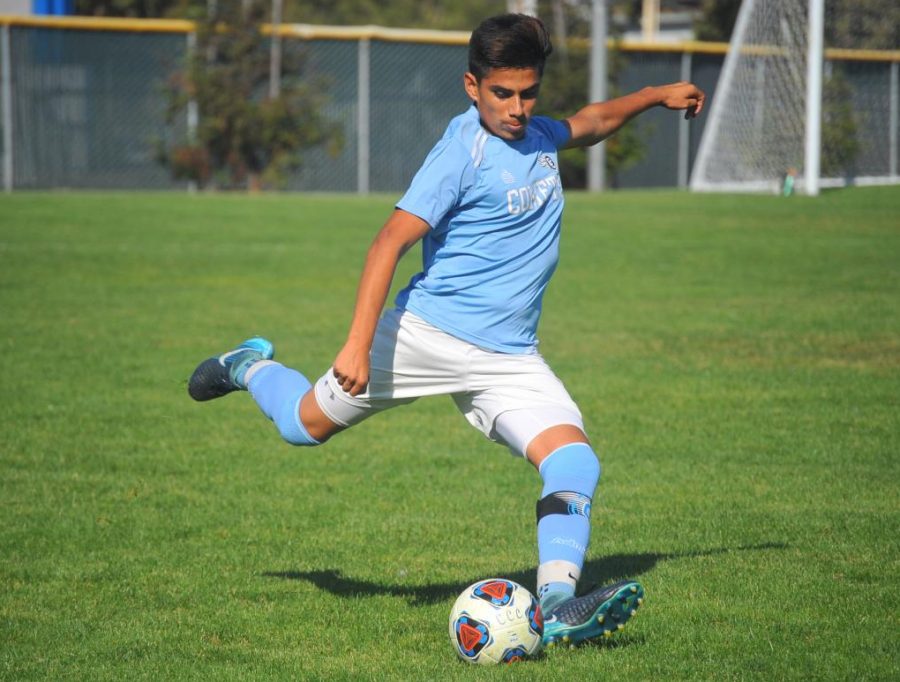 The men’s soccer team demolished Yuba College (0-7 in the Bay Valley Conference, 1-15-1 overall) 7-1 Friday in Marysville.
The Comets (7-7-4 overall and 3-2-2 in the BVC) did what was expected of them in the victory, which kept them in the hunt for a BVC championship.
But to have a shot at claiming the title, Contra Costa College still needs to win its final game against Merritt College at the Soccer Field Friday. Game time is 6 p.m.
The Comets will be at the mercy of other squads within the conference, but the victory at Yuba was crucial toward keeping their hopes alive.
“We started off a little slow against Yuba, until we got into a good rhythm and started to score some goals,” Comet defender Raul Garcia said.
CCC managed to get 20 shots on goal in the match.
The Comets forced 49er goalkeeper Spencer Green to make 10 saves in the 82 minutes he played.
Comet forward Akrosh Budhathoki came away with three goals and forward Rupert Dusauzay bagged a brace in their impressive showings.
“I believe we still could have scored more goals, but we missed chances that we could have put away,” Garcia said.
The team, which has won four out of its last six games, has failed to get past important conference rivals like Mendocino and Merritt colleges.
Both teams have frustrated the Comet offensive in their games.
However, in the game against Yuba CCC showed dominance over a lesser-skilled opponent by running up the score.
Garcia said that they were disappointed because they could not get more goals and because they allowed two penalties. He was happy that Comet goalkeeper Salvador Rodriguez was able to stop one of the two penalty kicks.
“We gave up the two penalties. Salvador was able to block one, but the other one went in,” he said.
The team will have this entire week to rest in preparation for Friday’s game against the Thunderbirds.
The contest could be the game that decides the conference champion.
“Our chances of winning the conference are very slim,” Garcia said. “We still have a chance to win the conference and make the playoffs. We just need help from other teams (Yuba and Napa Valley colleges). We have to win our game on Friday against Merritt.”
The conference can be decided as early as Tuesday after press time as the 49ers would have to beat Merritt.
Friday, Mendocino will face Napa Valley College (in their final game of the season) at 3 p.m. where the Storm must beat Mendocino to allow the Comets to even think about being conference champions.
If all goes CCC’s way and they end up beating Merritt, the Comets will be crowned BVC champion because of a tiebreaker.
However, if Mendocino ends up tied for first place with the Comets, they will be crowned the champions as they hold the tiebreaker over CCC.