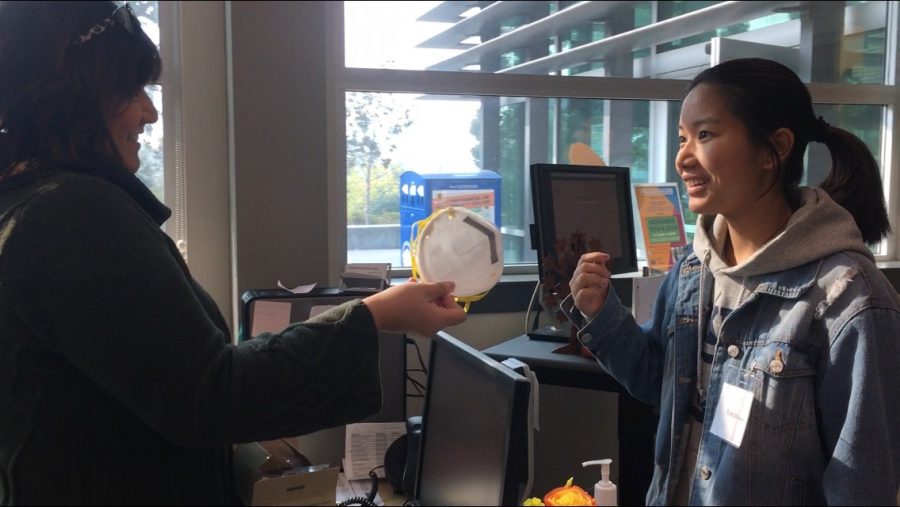 A student receives an N95 mask in the Welcome Center on Thursday.

After seven days of being blanketed by smoke from the Camp Fire, now the deadliest wildfire in state history, Contra Costa College waited until late Thursday afternoon to suspend the remaining classes for the day and cancel all of Friday’s classes.

As the Air Quality Index (AQI) hovered between 101 – 200 for the majority of the week, it was only when the index reached levels that were unhealthy for all people, not only sensitive groups, that a campuswide decision was made to distribute N95 masks to students.

According to the Bay Area Air Quality Management District, an AQI of 101-150 is dangerous to sensitive groups and 151-200 is unhealthy for everyone.

Thursday, the index hit its highest point of the week.

The index reached 263 at 2 p.m.which is well into the very unhealthy category which ranges from 201-300.

At 11 a.m. Thursday, before the worst of the smoke settled in, CCC Director of Marketing and Media Design Brandy Howard emailed faculty and staff with an update on the status of classes on campus.

Howard’s email read, in part, “Air quality is in the red zone (unhealthy). Like our partners at West Contra Costa Unified School District, and our sister colleges, Diablo Valley and Los Medanos, we are not canceling classes at this time. But, we recognize that the decision to participate in classes can and should be made on an individual basis.”

While Howard’s email was circulated, campuswide text and email alerts were sent to students alerting them that masks, provided by Police Services, were available in the Student Services Building.

However, staffers ran out of masks in about 45 minutes.

“We had about 180 masks to give out we are working with Police Services to get more,” Administrative Assistant Yvette Escobar said.

The N95 masks served as a welcomed respite to the smoke, however, given the fact that they were distributed mere hours before classes were canceled, many students wondered why campus administrators took so long to respond?

Health and Human Services major Trudy Ross said, “I had to leave campus after my morning class to go and get a mask since they weren’t providing them on campus for some reason.”

Ross has asthma, so it has been hard for her to breathe. The conditions haven’t been life threatening, but she has been trying to avoid the smoke by staying inside as much as possible. “Today is the first day I had to put a mask on the smoke is really thick today,” she said.

While Howard’s email circulated, CCC United Faculty Vice President Jeffrey Michels sent out his own email expressing the concerns of the faculty regarding effects of the smoke on faculty and students.

His message read, “We have been in dialog with District administration asking them to consider closing our colleges. Obviously, our colleges remain open for now. But faculty who are feeling ill or experiencing symptoms due to the smoke should certainly feel comfortable taking a sick day and canceling class. And those who hold class today should be understanding if some students can’t come to class under these conditions.”

At 3 p.m., Howard issued her second campuswide message of the day to let students know that the campus would be closing for the remainder of the day, through Friday will not be accessible to students until Monday.

Administrative assistant to the dean of student services Elizabeth Bremner said, “I had to take two days off work this week because of the smoke — it was suffocating to breathe. My administration and bosses were understanding and that helped with this situation,”

The Camp Fire has now spread across 141,000 acres and is 40 percent contained and as of Thursday, the death toll has risen to 63.

Cal Fire predicts full containment of the blaze will be reached on Nov. 30.