Squad ends January with a loss to Marin 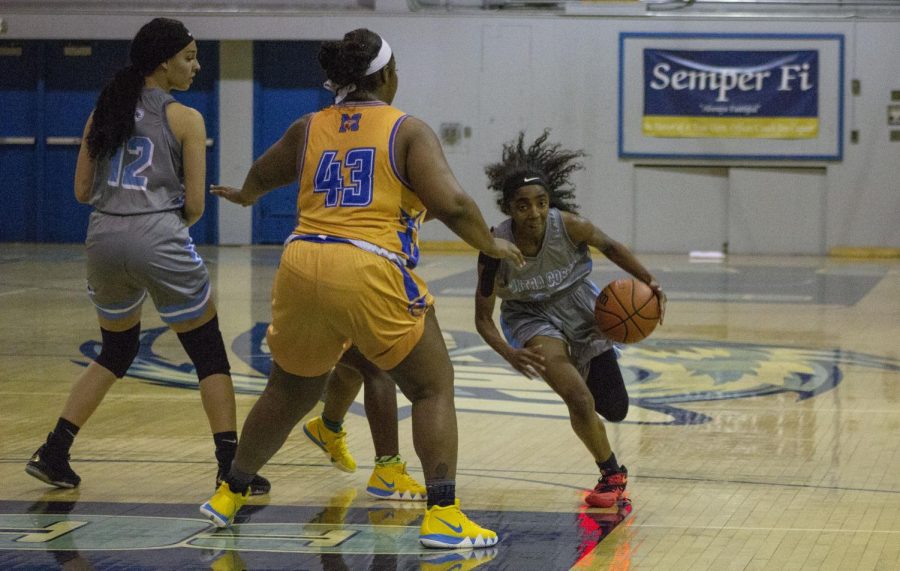 Comet guard Sicaly Sorrell drives down the lane in last week’s 62-60 defeat against Merritt College in the Gymnasium.

Despite a questionable late game call and what can be best described as lackadaisical defense by both teams, the Contra Costa Comets fell to Merritt College in a 62-60 nail biter Jan. 30 in the Gymnasium.

The Comets, who came into the match up on Wednesday with a 3-18 record (1-4 in conference play), hoped to bounce back from a tough loss to Solano College earlier in the week, as well as finish a difficult five game stretch on a high note.

CCC quickly set the tone early in the first quarter, surging to a lead behind the play of Victoria Lopez who took charge by netting nine points.

However, the T-birds never let the Comets find a true rhythm and kept the game close.

The teams ending the first quarter by trading baskets, and the home team up by one point 17-16.

As the second quarter began, the Comets did their best to adjust to the T-Birds aggressive play style. For the Comets, the second quarter was the best quarter of basketball in the game on both ends of the floor. The team pushed its lead to five points with only 2 minutes remaining in the half.

However, just as quickly as the Comets seemed to be hitting on all cylinders, a season-long theme reared its ugly head on the defensive end of the court.

In fact, it was contagious as both teams saw their offenses sputter as the half neared its end.

While the Comets shot the ball well early on, the team had problems setting up on defense on each Merritt possession.

The Comets to rebound from this loss on February 6, when they will play against Laney College in Oakland at 6 p.m.

The T-birds were able to take advantage of their opponent’s lapses, finding cracks in the Comets’ defense, while exploiting the block on possession after possession. CCC held their ground and closed the first half clinging to a 5-point lead at 36-31.

At halftime, Comet Coach Vincent Shaw made it clear that defense would play a key role in the outcome.

He implored his squad to crash the boards.

Despite a clear height advantage in the post, the Comets were losing the rebounding battle.

Play early in the second half mirrored that of the end of the first half, and CCC was never able to extend their lead to more than a 6-point advantage.

Merritt eventually was able to expose Contra Costa’s Achilles heel, exploiting the Comets defense as well as their inability to consistently rebound the ball.

The T-birds capitalized on a handful of mistakes and turnovers by the Comets and took a 2-point, 49-47 lead into the fourth quarter.

Shaw could be seen visibly imploring his team to rebound the ball, as Merritt was able to stretch its lead to 5 points with less than 6 minutes to play in the contest.

To the delight of their coach, the Comets finally put together a couple of key defensive stops to get back in the game. Following a huge 3-point basket by Kristyle King, the Comets found themselves within a single point at 57-56.

The teams traded baskets and in the waning seconds, the Comets still trailed, 61-60 with possession of the ball.

The Comets, however, were unable to take advantage of Merritt miscues. Importantly, what was initially called a shooting foul in favor of the Comets, was changed to a dead ball foul. CCC’s last opportunity for victory was lost and the T-birds escaped with a 62-60 win.