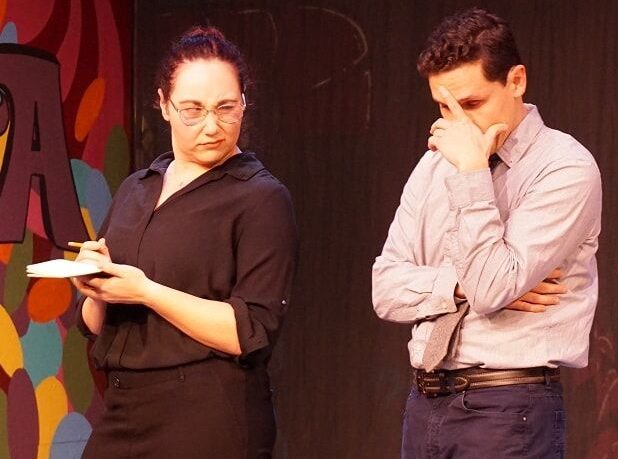 Annabel Glick (right), played by Maria Calderazzo, writes on a notepad as Harry Whiterspoon, played by Phillip Leyva, makes a facial expression during the production of “Lucky Stiff” at the Pinole Community Players.

PINOLE — In the first musical of the calendar year at the Pinole Community Players, opening night of the “Lucky Stiff” drew a crowd of enthusiastic theater fanatics ready to be entertained.

The play, which runs through Feb. 23, is hard to get accustomed too if you’re new to musical theater, but the plot is universal enough that anyone can understand it.

This performance lasted about two and a half hours, which is considered the regular run-time for a musical.

The performance was witty, quirky and funny at times, which entertained the crowd of mostly senior audience members with a sprinkle of younger people scattered throughout the theater.

This comedy follows Harry Witherspoon (played by Phillip Leyva), an average white shoe salesman from London, who learns about the death of his American uncle.

The salesman learns he is about to gain an inheritance from his late Uncle Tony, whose final request was to vacation in Monte Carlo.

To cash in, he has to wheel his lifeless uncle around the city of Monaco.

In his venture to the southern coast of France, Harry is met by many obstacles that are brought on by Rita LaPorta (Christina Boothman) Tony’s widowed girlfriend and Annabel Glick (Maria Calderazzo) from the universal dog home of Brooklyn.

Though Calderazzo and Leyva do a formidable job of playing their roles, attendees didn’t fall in love with Harry or Annabel.

However, this play relies on the spectacular performance of Boothman as Rita and other good performances from smaller roles.

If this play was made into a good film (not like the one from 2015), Boothman would be the only person I would want to see in the role of Rita — yea, move over Amy Schumer.

The smaller roles are what helps my theater-virgin eyes get through the musical.

Ensemble cast member Dean Starnes is witty and hilarious for the limited roles that he got.

Audience members were lucky they were spread out through the two acts.

It was impressive what Shoptaw could do with her role when only having the “Speaking French” scene in Act I.

Surprisingly, the scene was about 90 percent of her screen time — she should have been given more.

What allows this cast to flourish in the small-time musical, is the amount of talent throughout the roster.

Having a more diverse cast would have been awesome to see, especially since we live in one of the most diverse areas in the country.

I don’t know if the script of this play was designed to make Rita the prominent personality, or it was just the great acting of Boothman.

It is possible that Harry and Annabel were just meant to be characters that you don’t necessarily end up remembering after curtain call. Or, all of this comes from an underwhelming performance by the pair (Leyva and Calderazzo).

I can’t completely say they were bad actors because I’m not an everyday fan of the art.

I can tell you for a fact, this was entertaining enough of a performance to keep my interest throughout and possibly sit through more.