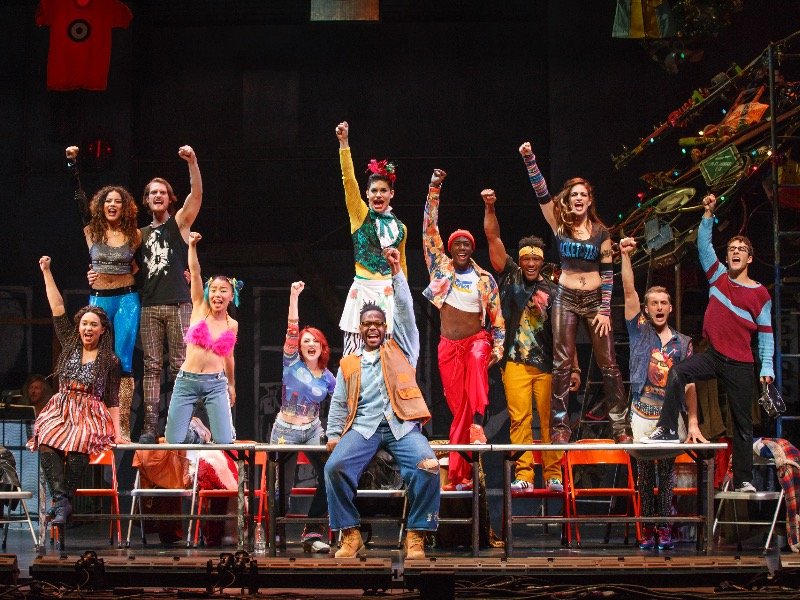 Cast members of Fox’s “Rent” live raise their fists in solidarity for those dying from AIDS during the musical number “La Vie Boheme.”

It wasn’t until the first commercial interlude that the cast of Fox’s live production of “Rent” announced, well, that it wasn’t actually live.

Due to an unfortunate, yet ironic “break,” Brennin Hunt, who played Roger, broke his foot while scaling the iconic scaffolding set during the final act of the previous night’s dress rehearsal.

Aside from the last 15 minutes of the Jan. 27 premiere, the taped dress rehearsal would ultimately air in place of the promised live performance.

For me, a die hard RENThead, this was only a minor blow to what I thought would be a television experience of theatrical proportions.

After all, “Rent,” along with its more mature content, did stray away from the monotonous family-friendly musicals such as “Grease” and “A Sound of Music” that Fox and NBC produced over the years.

But while watching Fox’s watered down production of Jonathan Larson’s gritty 1996 Pulitzer Prize winning musical, I began to realize that even without the unforeseen circumstance or poor decision not to invest in understudies, a live performance could not have saved this mediocre adaption from stage to small screen.

Larson’s groundbreaking rock musical, set in New York City during the height of the AIDS epidemic of the early 90s, follows a group of artist struggling with disease, poverty, love and death.
“Rent” broke barriers in the sense that it featured a large minority cast dealing with problems that arise in the LGBTQ community.

It tackled both drug addiction, as well as homelessness and gentrification.

Although Fox stayed true to character identity, casting RuPaul’s Drag Race alum Valentina as the beloved Angel and R&B singer Tinashe as Mimi, it’s not clear if they took vocal chops into consideration.

It does feel slightly unfair to form an opinion based on a dress rehearsal that the actors had no idea would be aired as the final product, but there is no excuse for being flat in every song.

Major issues with the quality of sound didn’t make things any better as hundreds of screaming fans made lyrics and lines almost inaudible.

Valentina seemed disconnected from the character Angel, who is normally portrayed as vibrant, passionate and sassy, singing “Today 4 U” — one of the most popular songs from the show.

His subdued performance, whether it were nerves or inexperience, fell short in comparison to theater veteran Brandon Victor Dixon’s heart tugging portrayal of lover Collins.

Dixon’s rendition of “I’ll Cover You: Reprise” is one of the few highlights that made the two and a half hour spectacle worthwhile.

It was their onstage chemistry and powerhouse vocals during “Take Me or Leave Me” that broke the fourth wall and really brought the production alive.

As a whole, however, Fox’s partially live production of “Rent” lacked the energy and edginess that is required to make it memorable.

If anything, “Rent” is meant to be a full-throttle experience packed with rambunctious songs, daring storytelling and character connections — dress rehearsal or not.

From the opening number, “Rent,” a drum infused rock anthem performed by Hunt and Jordan Fisher as Mark was nothing short of a let down.

Fisher’s portrayal of filmmaker Mark, who is the narrator of sort, was reasonable enough to keep the performance moving.

His stand out moment was, of course, during the legendary song “La Vie Boheme” where he takes lead to dance and sing along with the ensemble.

R&B singer Mario’s portrayal of Benny was too soft, I mean, I need passion and commitment — he didn’t give any of that.

At the end of the day, Fox’s “Rent” live-ish, could be chalked up to a learning experience, but it goes beyond that.

Even without the hodgepodge of issues, the true essence of “Rent” was sanitized for a television audience.

Let’s face it, live or not, “Rent” is not a made-for-TV musical. Although it’s relevance today is mirrored in continuing struggles, its internal foundation of community and hope that’s embedded in each song and character, is only made for the stage.