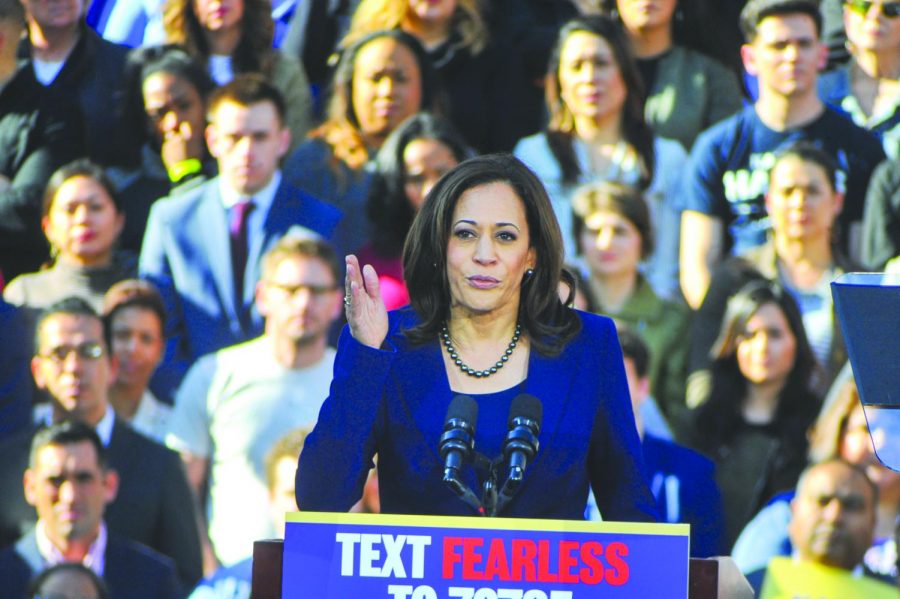 U.S. Senator Kamala Harris speaks to a crowd of around 20,000 people during the kick-off rally in Downtown Oakland, California on Jan. 17. Harris hopes to make history by becoming the first black female president in the 2020 election

OAKLAND — Community leaders and local musical acts spoke on the importance of unity in support of U.S. Senator Kamala Harris as the candidate most qualified to bring Americans together.

Harris, the Democratic senator from California, gave a rousing speech on Jan. 27, focused on unifying the country as she kicked off her presidential campaign at Frank H. Ogawa Plaza.

Clear skies set the stage at 12:45 p.m., which saw the streets of Oakland roar with support and excitement.

“The rally was well attended and very successful. Senator Harris clearly brings a lot of enthusiasm and a lot of important background to the race,” California State Assembly member Richard Bloom said.

Bay Area residents came out in droves with roughly 20,000 people in attendance, according to event organizers. The general admission line wrapped around nine Oakland city blocks from Broadway down 14th to 19th Street.

The crowd was packed with excited families who wanted to join the intimate space in front of Oakland City Hall, hopeful to witness history in the making.
After an invocation from Pastor Demetrius Edwards and an introduction from Oakland Mayor Libby Schaff, the main event began.

With a joyous and yet serious tone, Harris gave a speech focused on fighting for community, collective prosperity and freedom for all.

“People are having trouble keeping up with bills, people are drowning in America,” Harris said. She opened her speech showing the public she is aware of the issues they currently face.

“As children growing up here in the East Bay, we were raised by a community with a deep belief in the promise of our country and a deep understanding of the parts of that promise that still remain unfulfilled,” she said.

Communities are struggling just to make ends meet. Currently, 78 percent of U.S. workers are living paycheck-to-paycheck according to a study from Careerbuilder.com.

Many factors led to the reality that Americans face today, but Harris says this campaign is focusing on solutions.

He focused on communal responsibility and hope which seemingly prepared the crowd to take in everything Harris said.

The crowd rallied with massive cheers as the senator touted her support for progressive programs such as medical for all, debt free college, reproductive rights and comprehensive immigration reform.

She showed off her political experience with perfect cadence as she listed off big ticket items before confidently waiting for applause breaks each time.

“The fight for justice is everyone’s responsibility,” she said. “This is no longer a time for us to look for separations between each other.”

Hopeful for change and growth, she calls this time in history an “Inflection point” in our history. She also called out partisan politics for creating more harm than good.

All too often, Americans keep looking for a common ground, but we already have that Harris said.

One of the more common themes of her rally was the idea that communities need to start moving forward and realize that we will either “rise together or fall together”.

Oakland Mayor Libby Schaff gave some background on what Harris has done to bring communities together.

Harris often made references back to her earlier work during her tenure as an attorney general. She reminds the public of the $25 billion foreclosure settlement in which she helped thousands of Californians avoid foreclosure.

“I can remember my first day as a district attorney, only steps away from here where I swore an oath. Since that day I’ve only had one client — the people,” Harris said.

“I am lucky to have been raised in a community full of people who can see the world beyond their own,” Harris said.

She cited the community as the source of her moral compass. After solidifying her connection to the local community, she focused on the international stage.

Harris changed her tone, losing the cheerful smile that delivered most of her speech.

“Who are we?” she asked. “Locking children in cages is not protecting our border it’s a human rights violation.”

America has lost its position as lead of the international community Harris said.

She went on to tackle the serious issues in this presidential race. The crowd fell silent as she touched on the opioid epidemic attacking the country. “We don’t need another war on drugs, rather we need to declare a national health crisis,” she said.

Harris shifted her focus to security to close out her address.

Concerned about the threat of international gangs, she referred to the border wall debate.

“The President’s misled vanity project is not going to stop that (gangs),” Harris said.

“If given the chance I will defend the white house, the presidency and nation at a time when foreign parties are infecting the white house like malware.”

She guaranteed to always speak with respect to everyone, while also bringing dignity back to the white house.

There will be incumbents from within her own party who want her to wait her turn. In response to any such concerns she quotes Robert F. Kennedy, “Only those who dare to fail greatly can ever achieve greatly.”