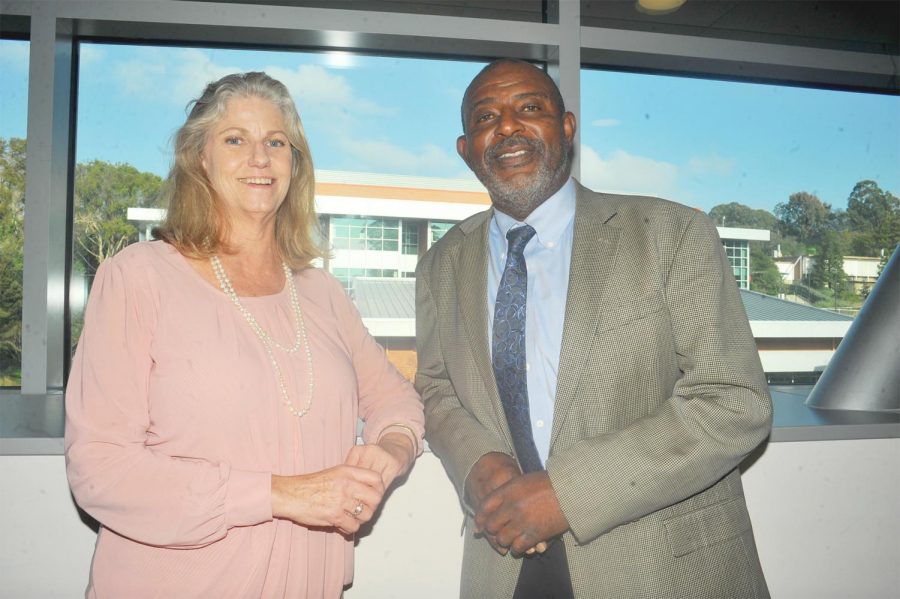 “It’s significantly important that not only are they here to cover, but to help move our college forward. Also, to prepare and set up these two new divisions,” CCC President Katrina VanderWoude said. “At this point we will likely have our interims with us well into November, which allows us to conduct a search in mid to late summer. That’s the plan at this time.”

Like many other community colleges around the state have already done, CCC is moving from a one vice president to a dual-vice president structure.
Kincade will temporarily fill the role as VP of student affairs, while Anderson heads up student services.

“We didn’t bring them here just to sit in those seats. These are vice presidents who have come in day-one, engaged with faculty and staff and reached out to our students,” Dr. VanderWoude said. “Both have experience at more than one college. They seem like a fit and seem like they will contribute. Honestly, they were fun people to be around.”

The decision to call off the vice-presidential search and move to select interims came after the nationwide hunt exposed flaws in the district’s hiring process.

VanderWoude said she reached out to executive search firm PPL Incorporated and explained the situation.

“I described that we closed both searches and that my original goal was to have these positioned filled before January,” she said. “They assured me that they had well qualified and experienced candidates for consideration.”

PPL shared a number of candidates for review and after doing phone interviews, VanderWoude narrowed it down to two.

Susan Kincade, who has over 30 years in higher education said she visited the college even before she was hired.

Kincade began her career at Fresno City College, where she worked in leadership positions with the University Lecture Series, Distance Education and the Academic Innovation Center.

“I went from the lecture series, where everyone wanted to see me, to something where no one wanted to talk to me. Distance education was so new and faculty had not bought into it,” she said. “But building those programs saw the immediate effect of more students achieving degrees. Having built those programs and being a champion of distance education is really a moment I am very proud of.”

Carsbia Anderson, who has worked in various student services position for over 17 years said he’s been busy since arriving at CCC a couple of weeks ago.

“I’m trying to be engaged with all the programs that are in student services around campus, just taking a look and offering any support I can. I’m not here to change anything, if anything I’m just observing,” Anderson said.

“What I hope to bring is what I think that folks in student service try to bring all the time and that’s a supportive attitude and caring attitude for students.”

Along with working as director of EOPS at Monterey Peninsula College, Carsbia also served as an Interim vice president of Student Service at Skyline and Cabrillo Colleges.

“Being here, I have noticed very positive things like the team of student service personnel who work very hard at what they do,” he said.

“I’m looking forward to bringing student services to a better place than when I got here.”