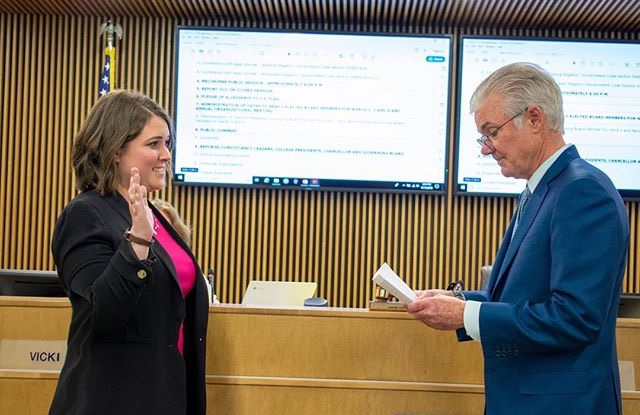 The Contra Costa Community College Governing Board is once again operating at full capacity after two new trustees won the 2018 California primary election this past November.

“I’ll be quite honest with you. I’m very impressed with both Barrett and Li,” board Secretary John Marquez said. “Both of them are well-informed. They read their materials, which is very important for board members. They ask good questions and have excellent suggestions.”

Marquez said prior to running for trustee, Barrett and Li were attending meetings, so they were already well-informed and had an understanding of the processes and policies.

“By the time they filed, they both had opponents, but Barrett and Li were better prepared, in my opinion,” he said. “Once they got elected and sworn in, it was clear to me that the voters made the right choices.”

Back in March, the Governing Board was unexpectedly left with a vacant seat after the resignation of then president Tim Farley.

Aside from Student Trustee Jocelyn Villalobos, the board was left with only four members to serve five wards of Contra Costa County.

“There would be times when more than one board member might be absent and it put a lot of pressure on the remaining board members and staff,” Marquez said. “It feels great to have a full board again because.

Speaking for myself, I can relax, I don’t feel pressured. I feel like I can take my time and be more prepared to better serve the district.”

Andy Li was born and raised in China and is one of the first board members of Asian-American descent.

“I have always had a passion to help students, but after having my two kids, I realized I really need to do something to help students and use that passion,” Li said. “Right now, it’s more about learning for me — this is not an easy job.”

Li said it feels very different being vice president than being a guest because now he has a voice and an opinion on agenda items.

“Community college is a great pathway for students. I’m ready to get involved in the discussions and make suggestions,” he said. “I’m trying to understand all the information, but I do realize that the funding formula is a top priority for all of us. I hope I can help with that.”

Rebecca Barrett is a native of Concord and a proud product of local public schools and the CCCCD.

Barrett attended Diablo Valley College before transferring to UCLA where she earned a bachelor of arts degree in political science.

“She wants the students to get familiar with her face and be able to ask her questions,” Villalobos said.

“Trustee Barrett is not afraid, she’s very student oriented and ready to tackle any challenge — she kicks butt.”

Along with being involved in some of the largest education policy changes in California history as part of the leadership team in the state’s Department of Education, Barrett also led the team that implemented the “Gold Ribbon Schools” awards system that rewards schools for high test scores.

Marquez said Barrett has worked for the state Legislature and for people in Congress, so she’s familiar with the politics that surround the Governing Board trustee position.

“Barrett is very sharp. She has worked along the California educational system for some time and knows her way around it,” Marquez said.

“She brings with her an immense background of knowledge. I’m really looking forward to working with her and Vice President Li.”

Aside from being a Governing Board trustee, Barrett is also a mentor to Diablo Valley College students. She works to cultivate leadership among the youth.

Currently Barrett works as a consultant, advising individuals and organizations on how to get better involved in the community.