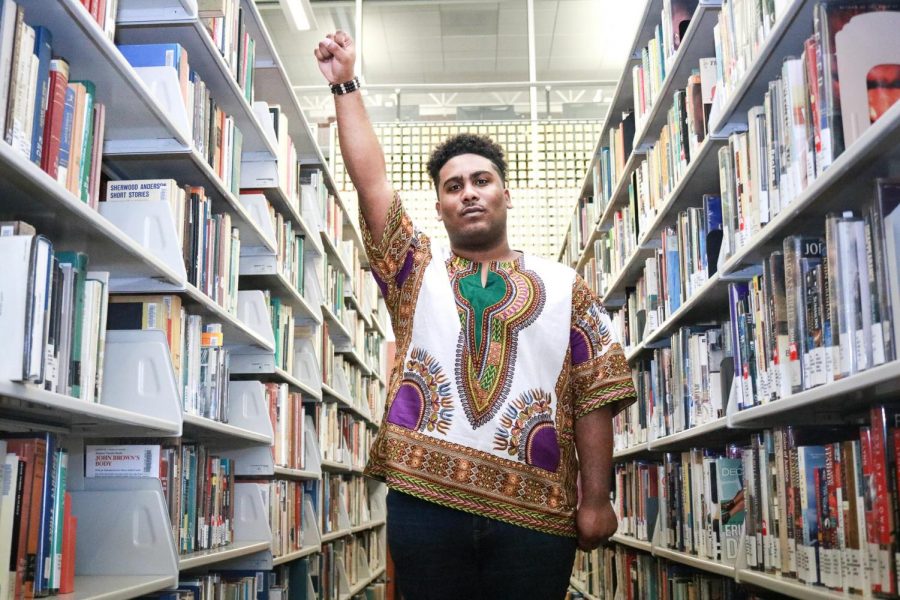 They are also taught the defining moments of African-American culture are those perpetuated by the stereotypes that come with living while black in America.

For Contra Costa College Black Student Union President Armond Corshawn, this distilled interpretation of black history and what is true, has not only sparked a deeper passion in self-identity, but in uplifting the black community through cultural awareness.

“In grades K through 12, we have this narrative that black people were just enslaved and that our history started in America, which is not true,” Corshawn said. “I would like to change that narrative and educate people about our history while we were in Africa, through the passage and now here in America — because we’re still making history.”

Corshawn, who is currently majoring in political science, already holds an associate degree from CCC in African studies and liberal arts.

He graduated with honors last May.

“In the media, just like throughout history, we are told that black is ugly and that having dark skin is not cool. Or that we are not smart. But that’s not the case,” he said. “Our origins encompass a richness from ancient-African civilizations that pretty much birthed science, math, technology and engineering. It’s a richness, not only in melanin, but in culture and spirituality.”

For Corshawn, this yearning for cultural knowledge and self-discovery came by chance — a yearning that would change the course of his life.

In 2015, during his senior year at El Cerrito High School, while playing a spirited game of wrestling, Corshawn fractured his back. “The doctors said I should have been paralyzed, but it was a good thing I did not need surgery and it all healed up on its own,” he said. “It’s crazy and I do thank God, because things could have turned out a lot different.”

At the time, the severity of the fracture and the state of his back was unknown. Corshawn who was set to attend Long Beach State University, decided to stay at home to recuperate.

“Originally, I was planning to major in nursing or be an emergency room physician,” he said. “I’m glad I didn’t go to Long Beach because I probably would not have learned what I know now.”

It wasn’t long after Corshawn graduated and recovered that he began taking classes at CCC.

Corshawn said after taking a few general education course, one of his friends told him about African studies. He then enrolled in professor Manu Ampim’s History of African Civilization course.

“From the moment I took that class I was hooked and my whole perspective on being black changed,” Corshawn said. “In a way, I felt bamboozled because no one ever taught me that. I was culturally aware, but I didn’t know the history.”

Ampim, who is the history, anthropology and geography department chairperson, said he first met Corshawn during one of the Per Ankh Academy meetings two years ago.

“Armond participated in everything, all the classes, meetings and our cultural outings,” Ampim said. “He is very confident and sharp and is comfortable implementing things and getting them done.”

At the beginning of last semester, Ampim said, Corshawn approached him and African-American studies professor Carolyn Hodge about re-launching the BSU.

“He really is working in the historical traditions of the BSU because he is providing the campus with ideas to help move academics in the right direction,” Ampim said. “It shows that Armond understands that being able to promote the interests of students of African descent doesn’t mean they have to be isolated from other student leaders on campus.”

Since the BSU has been active on campus, they have held events including the Poetry Slam, sponsored the Historical Black College and University Caravan and provided black representation through student leadership when the campus was experiencing hardships.

Corshawn said being immersed in an educational journey of cultural history is useless unless it can be used to empower the black community.

“I think it’s very important that we build a strong black community on campus, so we can come together to talk and deal with issues that we are facing,” he said. “My voice is strong and I’m able to speak for people who remain voiceless. Being able to share experiences as black people is crucial, especially because we are often underrepresented.”

CCC early childhood development major Roshawntala Cunningham, who has known Corshawn since they were in third grade said, Corshawn was the one who knew all the answers.

“If you give Armond something to do, he will always do it. He’s very driven. If he has an idea, he’ll shoot for it,”

This spring Corshawn is hoping to transfer to UC Berkeley where he will continue his education in African studies. “I want to teach my family, friends and community what wasn’t taught to me,” he said. “But I’m also trying to be like Mansa Musa, the richest man to ever live.”