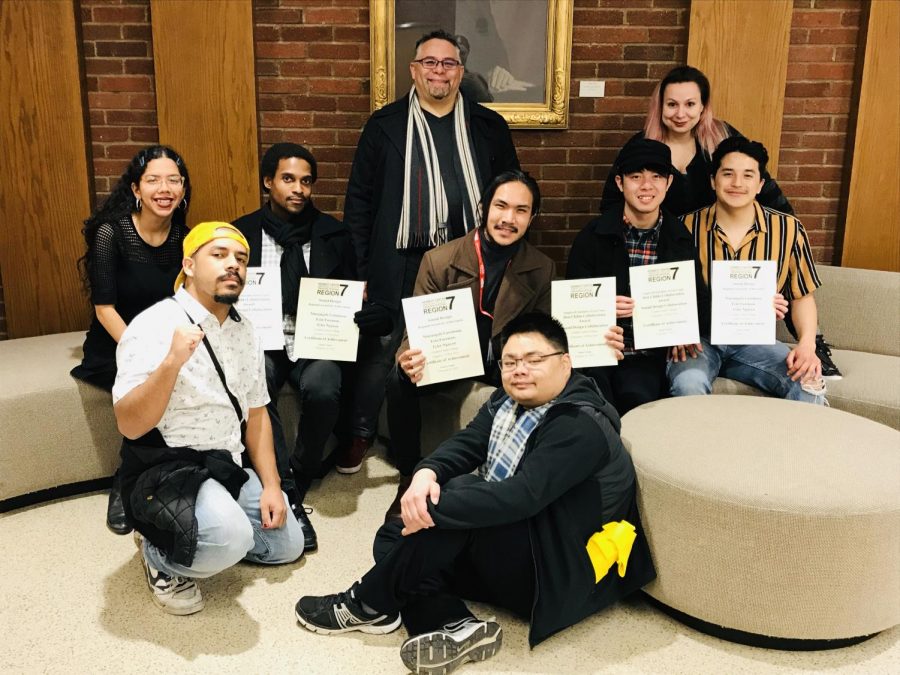 A weeklong celebration of the dramatic arts brought hopeful students across state lines to compete and celebrate in multiple disciplines providing an enriching developmental experience.

The Kennedy Center American College Theatre Festival took place at the University of Oregon from Feb. 18-22.

A gathering of university students from northwestern states, who make up the Kennedy Center’s 7th Regional District, were brought together for a week full of thespian activities.

“They have a whole week to take as many classes as they like and can choose from multiple things to do,” drama department chairperson Carlos-Manuel Chavarria said. There were seven students and two faculty members who traveled to Oregon to participate, he said.

The festival is a chance for drama students to immerse themselves in a community full of diverse artistic talents, Chavarria said.

The group of students was made up of not only four drama students, but three music students and a journalism student. Asha Alvarez, Diego Loza and Joshua Saephan were the actors who participated. Xavier Johnson competed as a journalist.

“I asked the music department if any students would be interested in composing the score for a production” he said.

“I always try to encourage collaboration,” he said.

For this year’s trip, the department brought competitors in acting, journalism and design.

The students brought home a regional award in design for their work in musical composition and set management.

“When I came (to Contra Costa College) five years ago, I wanted to excite students to become part of the drama department and create success. I hope these results will bring more support from the school,” Chavarria said.

Recently, things have been going well for the drama department and these accolades are expected to bring even more respect to the program he said.

As the weeklong event was centered mainly on theater, not being a drama student might be a little disorienting for first-timers at the festival.

Music students Ninoangelo Lastimosa, Erin Forman and Tyler Nguyen were surprised to have received a nomination for their work.

“We didn’t expect any of this,” Nguyen said.

The festival came out of left field to the composers who had worked with the drama department to create live musical accompaniments he said.

“We watched rehearsals about three or four times and around the seventh time we began to play a few motifs,” Nguyen said.

Making the sound design was an organic process for the team as they eventually found a rhythm of motifs they felt comfortable with.

“We had a violin, bass and keyboard to play along within the actor’s movements,” Lastimosa said. As the actors ran their lines and blocked movements, the musical accompaniment was inspired in those moments, he said.

“We don’t get to compose for film and we don’t get collaborative opportunities often, but are looking forward to more efforts like these again,” Lastimosa said.

The music students say they are eager to work with the drama department in the future. Placing second in regional won them a one-week intensive workshop with composer Don Childs.