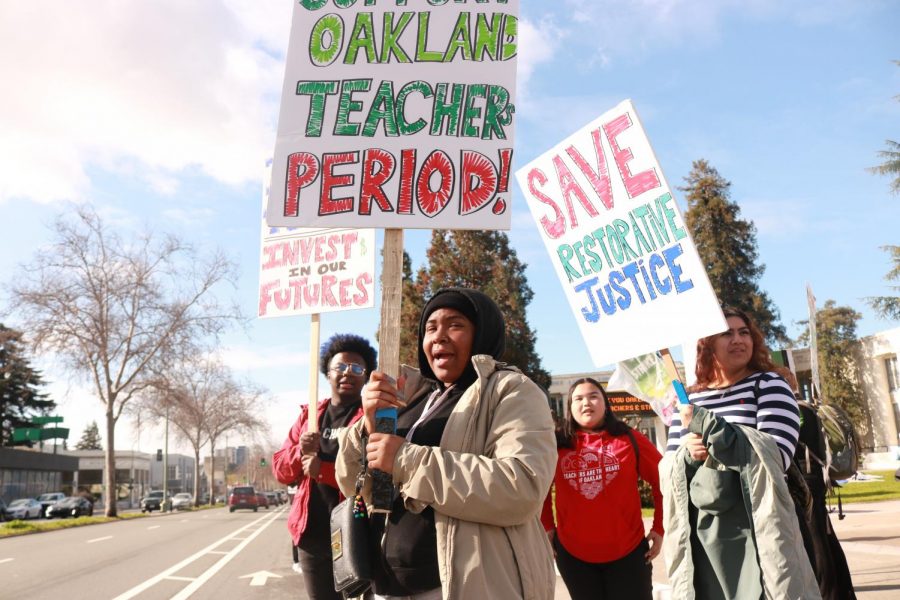 OAKLAND — With the popular slogan, “When we strike, we win,” the Oakland schools teachers union organized a seven-day strike before reaching a tentative agreement granting them an 11 percent increase in salary over four years plus a 3 percent bonus upon returning to work.

Conditions were finally agreed upon during an Oakland Education Association, which represents Oakland teachers, meeting at Paramount Theater Friday.

Ratification of the Oakland Education Association contract came after 1,141 members voted in favor and 832 opposed it, with four abstentions.

Martha Castro, an observer marching in solidarity with Oakland teachers, said, “Listen to what (Oakland) teachers say. Whatever these teachers say, is what every teacher wants.”

Castro, who is also an educator in the West Contra Costa Unified School District, serves as a kindergarten teacher at Tara Hills Elementary School.

Since then, 95 percent of Oakland Education Association members were on the picket line and 97 percent of students were out of school.

There were thousands of people who showed support for the picket lines and rallies, according to a statement made by the OEA statement on Friday.

Oakland Technical High School freshman who only wanted to be known as Sophia said, “I came out to protest because I think we need to show solidarity. My teachers do everything for us to have a better education and much more.”

The freshman said she and her classmates deserve smaller classrooms, nurses and counselors to make school less chaotic. She also believes teachers deserve an increase in pay.  “The least we can do is come out here and stand with them,” she said

As the inflation rate increases, so does the demand for money, Oakland Technical High School teacher Johanna Langill said.

Last year the inflation rate was at 2.9 percent Langill said. However, every year that rate goes up, and as it increases workers need a wage increase that keeps pace she said.

Langill said, “Suppose the minimum cost of living in the Bay Area was $100. Last year the inflation percentage as up to 2.9 percent so that means that the cost of living went up to $102.90.

“If the teachers were asking for a 3 percent salary increase that would add up to $103. However, say the district’s last written offer was a 1.5 percent bonus. That would come down to a $101.50 pay. That would result in a $1.40 shortage.”

This is a reality teacher’s have to face every year as the cost of living goes up, Langill said.

She said the struggle many Oakland teachers face is finding affordable homes in the city where they actually teach.

Many teachers share the economic concern as Langill, while also having concerns about negative atmosphere in schools and how to create a better work environment for students and teachers.

Ted Allen, a teacher at Oakland Tech, said, “There’s this issue now that schools hire individuals who don’t have the necessary educational (qualifications).”

“It is cheaper for schools to hire undergrad teachers,” Allen said. “The school system does little to balance out the struggles new teachers have. With financial instability mounting, it is more necessary than ever to give teachers support from all sides.”