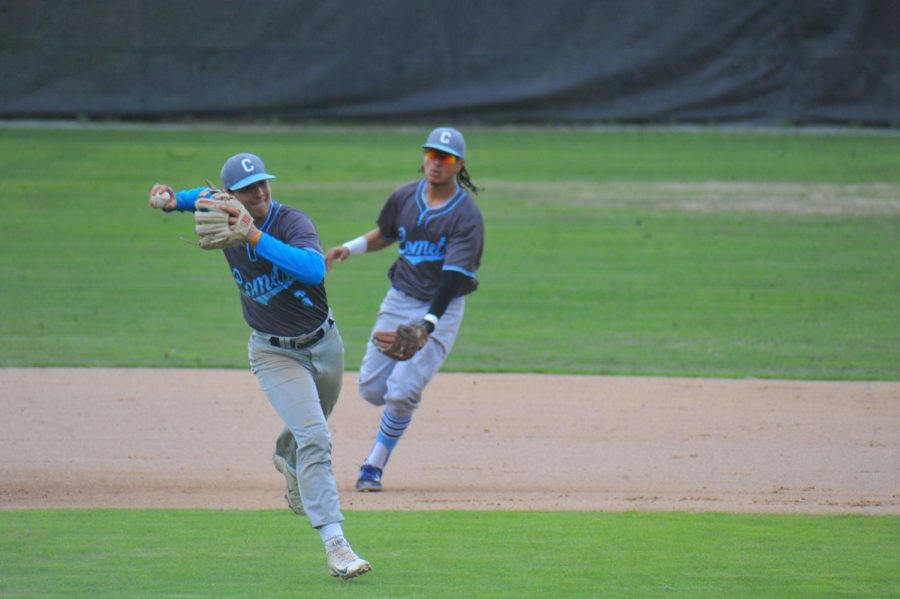 Comet shortstop Lucas Abbas throws a fielded ball as infielder Andruw Shaw runs behind him during Contra Costa College’s 6-3 win over Los Medanos College on Friday at the Baseball Field.

A confrontation cleared both benches following the game-winning bunt that gave the Comets a 6-5 walk-off victory in the 10th inning against the Los Medanos College (7-11 overall and 0-2 in the BVC) Friday afternoon at the Baseball Field.

The post-game scuffle around the mound quickly turned a celebratory mood sour for the Comets (2-13 overall and 2-0 in the Bay Valley Conference), who won their second straight game as players from both teams needed to be restrained.

Left fielder Mychael Jamison said, “We had a bit of a confrontation with them as they left the field. (First baseman Ike Brown) saw LMC players push Lucas (Abbas) and we did nothing but defend our team and field.”

Emotions ran high as the Comets scored six unanswered runs and took their second straight game against the Mustangs.

The win ensured a series win against the Comets’ intradistrict rivals from Pittsburg.

Guinn said, after a hard-fought game that ends in extra innings there is usually some feistiness between the teams.

“We fought back and made an effort to stretch at bats, which helped us as the game wore on,” he said.

CCC returns to action Thursday at 1 p.m. to play Solano Community College at the Baseball Field.

The Comets found themselves in a familiar situation after starting pitcher Fred Sito gave up three runs early on and eventually found himself facing a 5-0 deficit at the end of the fifth inning.

Comet bats were silent against LMC pitching as they only had one hit over the first four innings. However, with two outs in the bottom of the fifth inning, the home team was able to find an offensive spark.

Right fielder Kalen Morris, who went 1-for-4 at the plate, worked up a high pitch count and singled to get on base.

Two long at-bats drawing walks followed as Darius Foster and Andruw Shaw loaded the bases for the Comets. It was the first offensive threat of the game, putting pressure on Mustang starting pitcher Scott Meylan.

Two more walks pushed in a pair of runs in for the Comets and kept the inning going. The walks started a five-run rally for the squad highlighted by Lucas Abbas’ (1-for-3) two-run double.

“I was looking for something down in the zone, something I could drive, and luckily I was able to put contact on it and get a few more runs on the board,” Abbas said.

“We wanted to run the (pitcher’s) count up and tire him out — and we did just that.”

Using that approach, the Comets were able to knock Meylan out of the game after the inning.

Guinn said, “We try to teach patience at the plate to all of our guys in practice. I was pleased to see it out there.”

The Comets failed to take the lead in the inning, but by evening the score, they hit the reset button on the game allowing a clean slate for Sito (8.77 ERA) to go to work on the mound.

“It’s a completely different game when you are down by five than when you’re tied,” Sito said.

He also said his coaches asked if he was still feeling good in the seventh inning and if he wanted to go the distance and pitch all nine innings. He responded that he was ready.

“He had some quick innings there and it made a difference for him to get into rhythm,” Guinn said. “We also had a few chances there where we didn’t score and his effort kept us in it.”

Facing new LMC pitcher Mitch Hoffer (0-1) forced the Comets to be even more patient at the plate.

Jamison said, “It took us a few innings to get used to his style, but we were able to pick up on it and get that winning run home.”

The Comets were knocking at the door in the later innings but left runners in scoring position, which frustrated the team. However, according to closing pitcher Mark Jones (1-0) it showed the offense was locked in and focused.

This fired up Jones for his performance in the top of the 10th inning.

“It’s my job as the closer to provide a different energy,” Jones said. “To be intimidating while on the mound.”

Jones bounced back after hitting his first batter by recording a fielder’s choice and a double play to get out of the top half of the inning and notch his first win of the season.

This gave the Comets energy to try and finish off the Mustangs as second baseman Bryan Perez, the Comet leader in slugging percentage at .514, started off with a double and advanced to third base on a wild pitch.

The Mustangs then intentionally walked the next two batters loading the bases and after recording their first out on a fielder’s choice, Comet designated hitter Casey Edmunds came up.

Edmunds laid a perfectly executed bunt down the first base line which drove Abbas in to score giving the Comets their first walk-off win of the season.