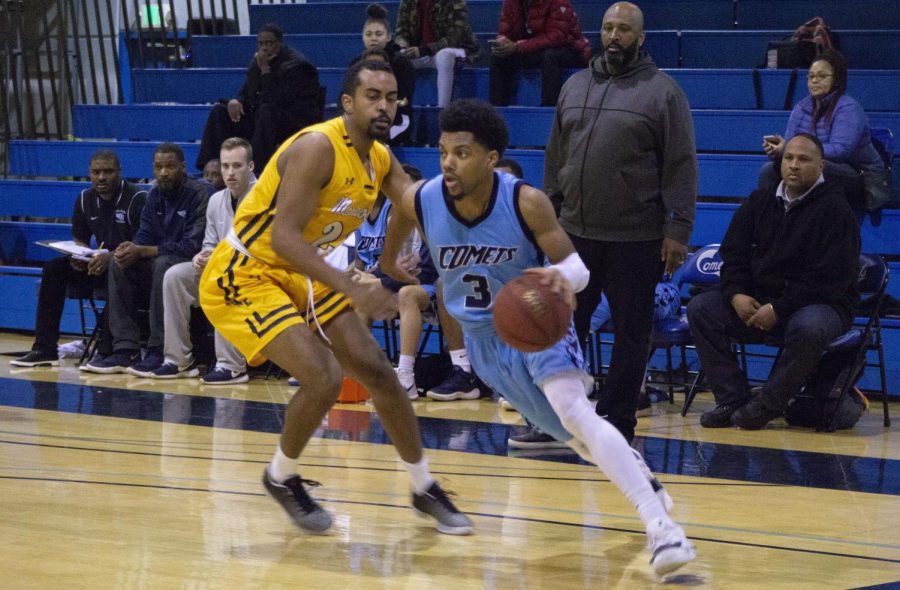 The men’s basketball team, for the first time since the 2015-16 season, finished with a record over .500 in the Bay Valley Conference, which was the last time they made the state playoffs.

For a team (13-15 overall and 9-7 in the BVC) that only featured three sophomores (Isiah Attles, Eric Jones and Evan Thompson), Contra Costa College was on the cusp of a playoff berth, but fell short to Yuba College in a must-win game on Sophomore Night.

“We’re the same team whether we win or lose. It’s just if we come with a focus to get the job done,” Comet coach Miguel Johnson said. “As a young team that only has three sophomores, it’s tough when we go to the bench and try to get something from the reserves.”

As the season progressed, consistency was something that the Comets struggled to find. They first saw a five-game losing streak, then a five-game winning streak, which was followed by yet another five losses in a row.

“It’s tough in conference play. It can be hard for these guys to understand how hard it is to stay focused and how much it takes to execute,” Johnson said.

Despite some disappointments this season, the Comets still provided some of the most lethal offense and exciting games in the conference.

Late in the season, CCC was involved in two double-overtime games.

Attles said, “Toward the end of the season, we learned that we were playing for more than just individual success. Our team ended up missing the playoffs by one game. For us to win four of our last five showed how resilient we were.”

In any game, CCC was a team that could light up the scoreboard from beyond the 3-point line, however when the shots did not fall, the Comets struggled.

“When everyone contributed in the ways that we knew they could, that’s when everything was good,” sophomore guard Evan Thompson said. “It kind of got to a point where individuals were feeling like they had to do more, which got them out of their roles.”

One of the Comets’ weak spots throughout the season was their lack of ability to compete against teams with more size.

Also, CCC struggled to maintain halftime leads against conference rivals Solano Community College and the Yuba 49ers, which were pivotal games in the playoff hunt.

However, Thompson said that the challenges faced when it came to size were not something that hurt the team in games.

“It definitely had its challenges, but I don’t think it really did too much against us. If we showed the effort, we felt like we could play with anyone,” he said.

Attles said playing against bigger guys was difficult, but the team never believed height would be the defining reason a game was won or lost.

“We never went into those games thinking that we were going to lose just because we were smaller. We knew that we would be faster than those guys,” Attles said.

Even though the team had high hopes of making a run for the state championship, they are happy with the performances of the three sophomores and the young core of freshman.

“At the end of the day I’m proud of my guys,” Johnson said.