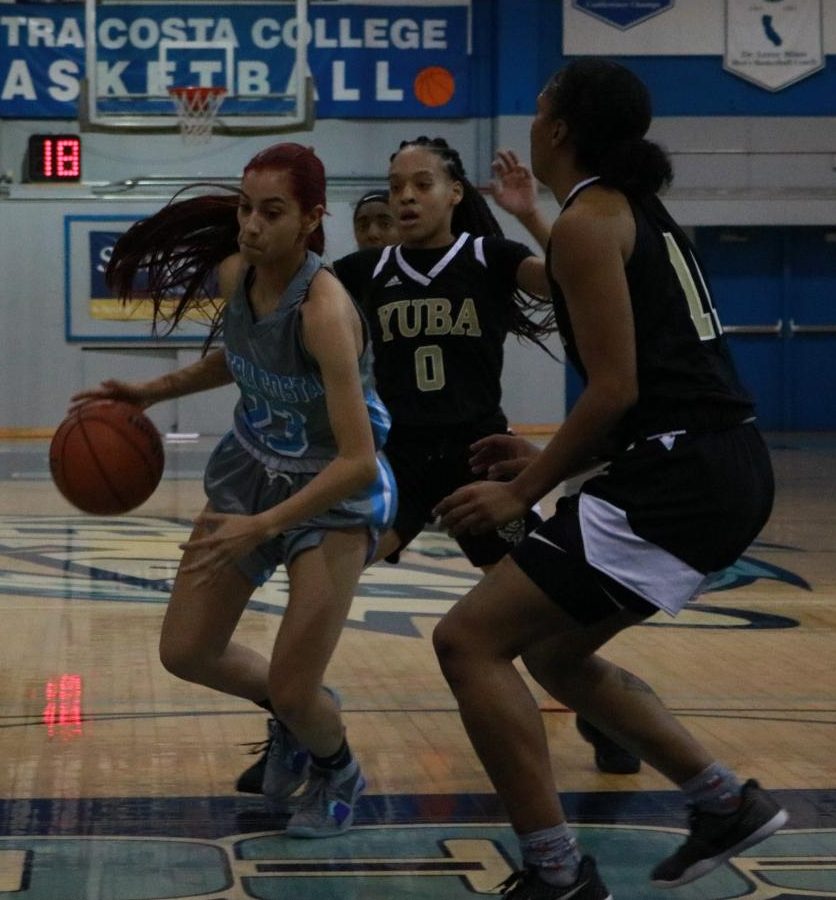 Sophomore guard Victoria Lopez dribbles through two Yuba College guards, LaiLani Hanks and Taeyla Washington, during a game at the Gymnasium on Feb. 20.

The women’s basketball team started the 2018-19 season with a disappointing 12-game losing streak after facing tough opposition in non-conference play.

Although CCC finished the season 1-9 in the Bay Valley Conference and 4-23 overall, the team was able to turn that negative record around in conference play, despite having limited bench depth.

In the two games against Merritt College and single match-ups against Yuba and Los Medanos College — CCC only lost each of those games by single digits.

In a season that saw the team gel into a roster that could do a little bit of everything, the Comets struggled to stay in games late due to fatigue from playing many minutes.

“Not having a bench did hurt us at times, especially when we were in foul trouble,” sophomore guard Victoria Lopez said. “In my opinion, I didn’t reflect much on that too much because we already knew that we didn’t have (a lot of players), so we learned how to play (longer minutes).”

The team, which had seven players at the end of the season, managed to improve on its defensive discipline and stay out of foul trouble.

“I think it’s a poor excuse to say that we didn’t come out with a victory because we didn’t have one more player or another person there to help,” freshman guard Dzeneta Husic said. “It’s a team effort. Collectively, I believe we played more than enough games to be conditioned.”

Throughout the season, growth was a constant factor that kept the team together through those tough times.

“Knowing that we were not having the best season got to us, but we continued to fight with what we had left,” Lopez said. “We didn’t just give up because our record wasn’t what we wanted it to be. When we played for each other, our team vibe was much better.”

For a team that had five sophomores, maintaining a positive attitude was key for the squad toward finishing the season strong.

“I’m happy that we were able to finish the season and stick together with all the ups and downs we faced as a team,” Lopez said.

For the team, it was not always about the opposition before them or if they were a better team. It was more about who was smarter with the ball at the end of games.

“The hardest part was bringing a bunch of pieces together,” Husic said. “It was all about putting the puzzle together and that takes time. Toward the end of the season, we started to get things together, but it was too late and left me with a bittersweet feeling.”