‘Figure it out, lead the way’ 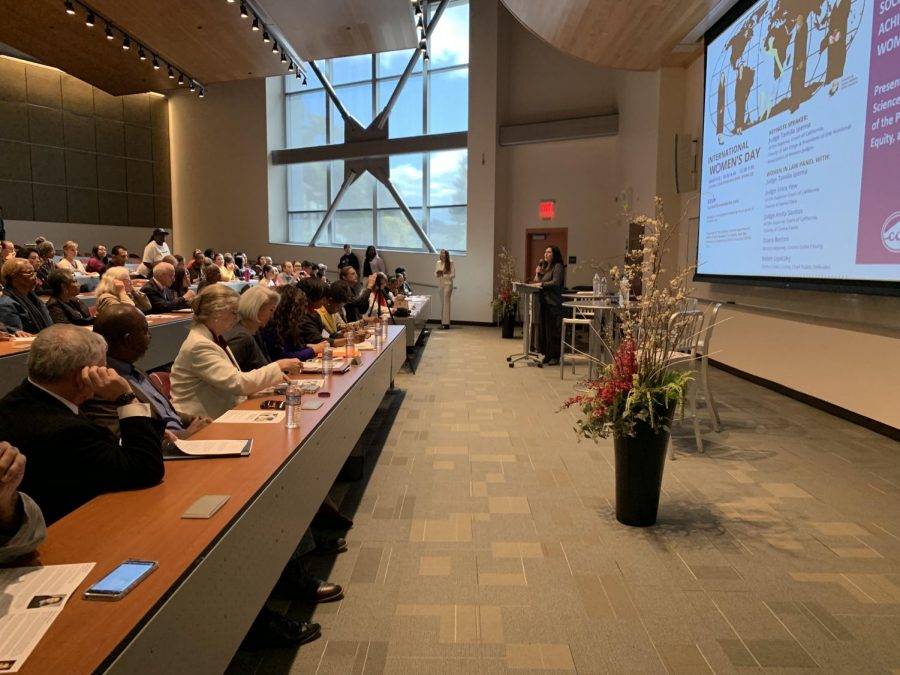 A panel of Superior Court judges and district attorneys from across California shared their experiences as women in law with an audience of women’s rights advocates in celebration of International Women’s Day in GE-225 on Friday.

Superior Court Judge Tamila E. Ipema delivered a keynote speech about her experiences as an Iranian-born woman living in fear of affiliating with certain societal practices.

“For the first 20 years of my life in Iran I lived in fear. I was afraid to speak my mind, afraid to associate with certain groups and afraid to read certain books banned by the (theocratic) government.”

Ipema was chosen to speak because, like many women outside of this country, she has gone through life and death struggles that American women don’t experience.

She said, “The price (of living) was too high — despair, torture and death. At a young age I promised myself that I would educate myself, be strong and have the courage to stand up for what’s right — for justice.”

In her early 20s, a few months before the Iranian revolution of 1979 she came to America in pursuit of higher education on a student visa.

She then began an intense study of immigration and international refugee laws, and with this knowledge she acquired refugee status for her brother who is now in Canada.

As the 60 people in attendance sat riveted to Ipema’s story, they were also learning the steps to bring immediate family members to the United States.

“It took 12 years of my life to work hard to accomplish the settlement and the permanent residency for my immediate family.”

Like many women, family is parallel to pursuing a career and more often than not for women, these goals tend to conflict, especially for women in law enforcement.

Contra Costa Superior Court Judge Anita Santos, who served as an officer in the Concord Police Department in 1996, described the challenges women face while simultaneously maintaining a family and career.

“I had my first son while I was a police officer and I remember I was the first officer at the Concord Police Department to become pregnant and have a baby. They didn’t know what to do with me. So I literally wrote a maternity policy for police officers.”

International Women’s Day is a worldwide celebration of the achievements women have accomplished in the face of discrimination.

“You rise to the occasion as a professional woman. If it hasn’t been figured out, you figure it out, you lead the way,” Santos said.

Women’s day was first sponsored by the United Nations in 1975. However, it originated out of an effort to promote women rights in the early 20th century when the Socialist Party of America created the first National Women’s Day.

According to the Encyclopedia Britannica, German activist Clara Zetkin, encouraged by the International Socialist Congress, agreed in 1910 to create an international version of the U.S. holiday.

Since the 1900s women have gained the right to vote and have succeeded in higher education fields that were once considered exclusive to men, however there are still issues where women are not being treated equally by male peers and are still being paid less due to their gender.

According to the Institute for Women’s Policy Research in 2017, female full-time, year-round workers made only 80.5 cents for every dollar earned by men, a gender wage gap of 20 percent.

The research stated women are almost half of the workforce and are the sole or co-breadwinner in half of American families with children.

Overall, International Women’s Day is a time to reflect on the struggles and achievements that encompass being a woman in the 21st century.

The event was sponsored by the Community Organizing Political Action Club and the political science department. Department Chairperson Vanna Gonzales hosted the event.

Middle College High School senior Nikole Slaton said he has been thinking about going to law school for a couple of months.

“I had already wanted to go into law, but the biggest takeaway (of the event) for me was not to give up,” he said.

“Just keep going. There will be times when you might want to stop. But don’t.”