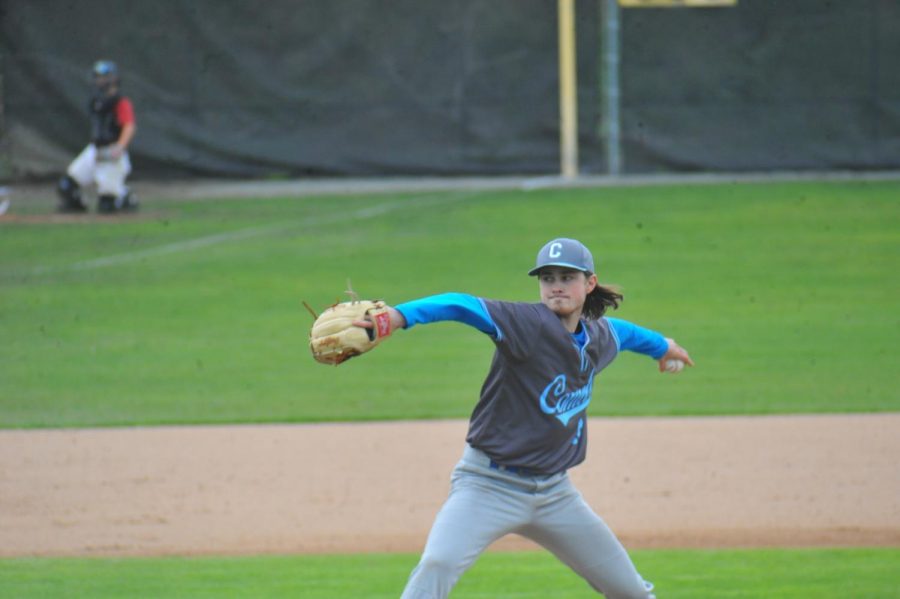 Contra Costa College pitcher Conner Rudy throws a pitch during the first inning of the Comets’ 6-3 win against Los Medanos College on March 7 at the Baseball Field.

Intensity and drive are two of the words that coaches and teammates use to describe Comet left-handed pitcher Conner Rudy.

In the opening game of Bay Valley Conference play against Los Medanos College, Rudy’s start was the shot-in-the arm his team needed.

In the sixth inning of that game, he gave up two runs, while still having runners in scoring position with one out.

In the moment, it looked like the game could get away from him, but he dug in deep to get out of the inning to maintain CCC’s comfortable lead.

“He likes to win,” Comet coach Brian Guinn said. “He’s really intense about what he’s doing and he gives everything he has on the mound. He does what he has to do to win ball games.”

That performance set the tone for conference play as CCC has started 3-3 in the BVC, which has spurred the Comets to play inspired baseball.

“We have a lot more to our team than what our record shows,” Rudy said. “We got kicked in the teeth early in the season — that first game in conference was a good start for us. We’re just trying to be more consistent and competitive in every game.”

He said the team is pretty streaky, but they are able to feed off each other’s energy when the team is feeling down.

“Connor fires me up,” Comet outfielder Mychael Jamison said. “He’s probably the most intense guy out there, but it’s a good kind of intense. He wants us to play at the best of our ability.”

Guinn said the team definitely feeds off of the lefty because Rudy is a competitor.

“Anytime you get somebody on the mound that is throwing the ball well, the rest of the team is going to feed,” he said.

Rudy, who grew up in Charlotte, North Carolina, heard of Contra Costa College through his travel team coach who played collegiate baseball at UC Berkeley with Guinn. As a team member of the University of North Carolina at Charlotte, Rudy was a redshirt in his first year on the team and played for the fall team his second year.

Redshirting is a method used to extend a college player’s eligibility while preparing them to play physically or academically.

Shortly after, Rudy was introduced to Guinn and was able to pay a visit to CCC when his travel ball coach brought him to San Pablo.

“My travel ball coach played at UC Berkeley with coach B (Guinn), so that’s how I got introduced to him,” Rudy said. “When I came to see the school, I liked coach B (Guinn) and the rest of the coaching staff and the team seemed like it had good people. I came out here because I thought it would be a good change.”

“I’m trying to keep my front side closed (when winding up for a pitch) and getting a good follow through (with his throwing arm after the pitch),” he said.

“I’m mostly going for physical stuff like being in the gym — it’s just those daily habits that help you build as a person.”