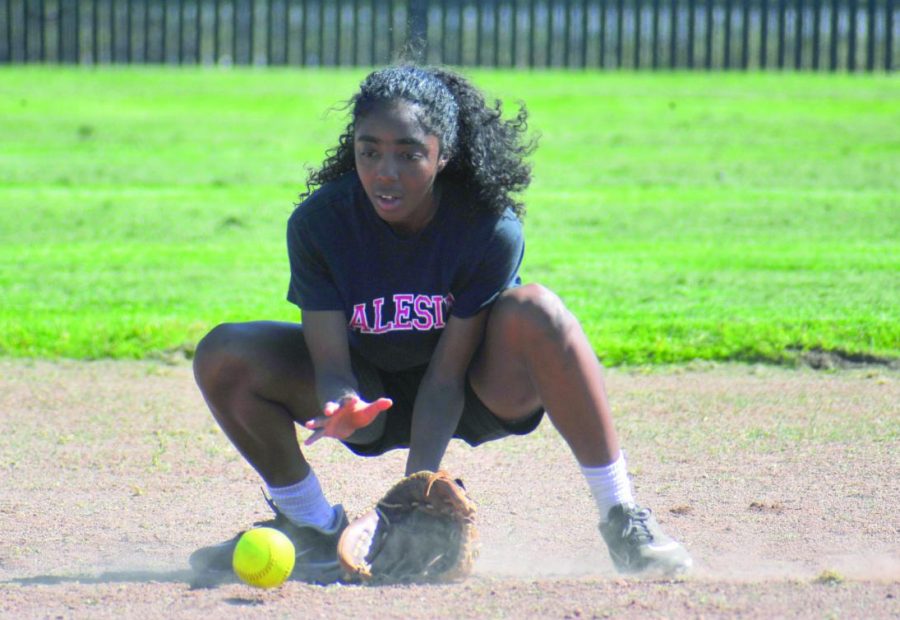 Comet infielder Sicaly Sorrell fields a ground ball during softball practice at the Softball Field on Monday. The team will have played its first game in a doubleheader against Mendocino College on Tuesday after press time.

Disappointment. We all face it and hate when it happens, but with that comes the opportunity to grow from failure and start something great. The Contra Costa College softball team will now live out that reality.

After two years without a softball team, the athletic department will field a squad this year, with its first games, a doubleheader, scheduled for Tuesday (after presstime) nearly a month after some colleges in the Bay Valley Conference began play.

The largest issue causing the college to go two years without a softball team was a lack of participation. Other conflicts for players, such as poor grades and incompatible schedules, also played a part in the program’s failures.

But the 2019 season signals a fresh start for the program with the hiring of Taylor Harris, who an accomplished local high school coach who has won multiple North Coast Section championships. Harris grew up in Hercules.

She said there is going to be a softball team this year and credits the situation to the fun atmosphere during practice.

“It’s been fun for me,” Harris said, about introducing new players to softball.

She said the new players are picking things up quickly and the experienced players are willing to help the novice players, which creates a supportive environment.

The early season optimism shared by coach Harris will now see the opportunity to bear fruit. Her primary goal at the beginning of the season was to at least gather enough players to field a team.

Harris, who was hired as coach this year, was tasked with the seemingly impossible mission of finding enough players willing to participate.

It was a proposition that baffled the previous coach for much of her tenure at CCC.

With all options being wedged opened, Harris has been willing to ingratiate new players to the sport. She wants to attract players by creating a nurturing, friendly and supportive environment.

As of game day on Tuesday, the total number of players CCC has is 11, with nine being the minimum to field an eligible team. The last time CCC fielded a softball team was in 2016, when it compiled a record of 0-26 overall and 0-22 in the Bay Valley Conference.

First-year player Jenna Husic said she’s excited because CCC is having a team this year and believes it is a great step in the right direction for women’s sports at the college.

“It’s a chance to show out for women’s sports at CCC,” Husic said.

As a first-year player, Husic believes the atmosphere around practice is fun because they are motivating and everyone is inviting and helpful. She thinks the mood is partly due to the coaches,

“We have the best coaches and the best head coach,” she said.

First baseman Shelly Walker said the atmosphere around the team this year is good.

She said the team is mostly made of players who are new to softball with some coming in from the basketball team. Most importantly, she said everyone is helping each other grow.

Walker is excited about getting to play this year, because in years past that wasn’t the case.

“It means I get to play, and I’m really excited,” Walker said.

Harris describes her team as a supportive group that learns every day.

As far as leadership, she said there wouldn’t be captains this year, but everyone from the experienced players and new players can lead when needed.