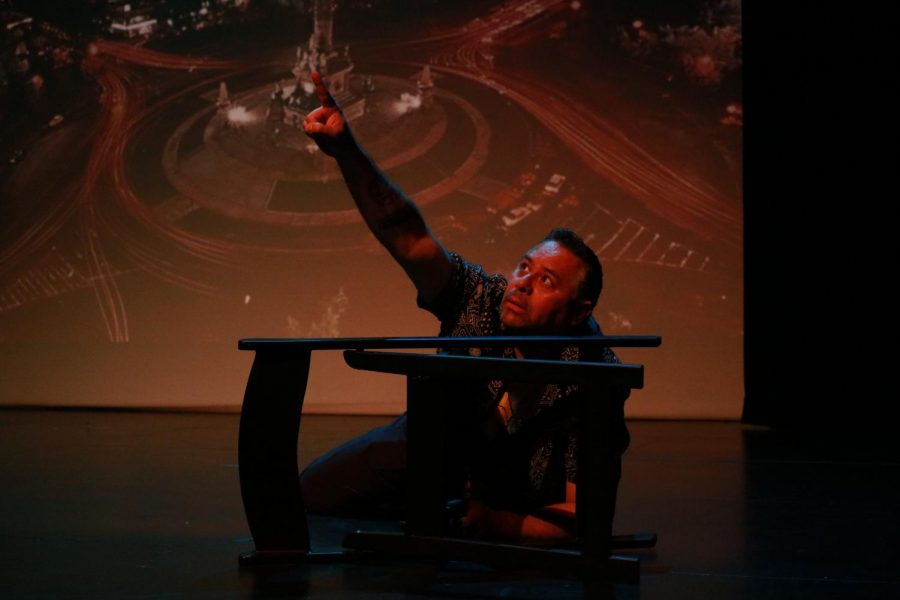 Carlos-Manuel Chavarria, playing himself, re-lives past experiences during a scene from his one man show “La Vida Loca” at the California Theatre in Pittsburg on Friday.

PITTSBURG ­— Audience members were treated to a journey of heartbreak spread throughout the trials and tribulations of a young gay Latino immigrant here Friday during the production “Mi Vida Loca.”

The California Theatre opened a two-night showing of Contra Costa College drama department Chairperson Carlos-Manuel Chavarria’s play. The show tells the story of Chavarria’s struggles as a gay, undocumented immigrant in the U.S. on his path toward finding happiness in life.

The theater was decorated in old-fashioned trimmings and a stage with only two chairs sitting upstage.

A dim rose-colored glow lit the stage as he began to tell the story of a young Latino man who navigated stages of life while facing adversity at every turn.

It’s one where his homosexuality is a stigma that would forever leave a divide between himself and his family. Chavarria tells stories filled with raw emotion and vulnerability that grace the stage and sells every line with the utmost confidence

Helping to enhance the show, Chavarria has a projector behind him at all times, which displays pictures of pivotal moments in his life.

Throughout the show, he recites monologues in a manner reminiscent of a Ted Talk, but the emotions he ricochets around the theater keeps viewers invested.

Between a few scenes at the start of the production, there were some microphone distortions that almost ruined his strong deliveries. However Chavarria remained impressive.

At the start of his one-man show, Chavarria is seen bouncing across the stage with young fervor — the story only gets heavier as time goes on.

Between scenes, he breaks the fourth wall and addresses the audience to give them important lessons about Latino culture.

Whenever he uses Spanish slang like “hoto” and “pendejo” he quickly claps his hands together in the air. “Time for a lesson,” Chavarria beckons as he quickly teaches any non-Spanish speakers in the audience.

He would explain in a confident and empathetic voice the multiple slang words used as derogatory terms for gay men in the Spanish community.

As time goes on, there is an obvious shift in tone.

Suddenly, his narrative voice takes less of a playful approach.

What starts to take hold in the latter half of the show is a flurry of entirely traumatic atrocities.

Each shift in emotional tone is accompanied by large grandiose body movements.

It is a much-appreciated performance choice since he is pulling off a great run as a one- man performer.

Part of the difficulty in staying engaged with the show is certainly being able to stay interested in, what is essentially, an incredibly long monologue.

That is not to say that the show is not entertaining, but rather Chavarria rises to the occasion by injecting his performance full of well-planned crescendos.

Displaying his experienced grasp on leading audiences along on a journey, he makes paying attention to the important parts of his performance a smooth ride.