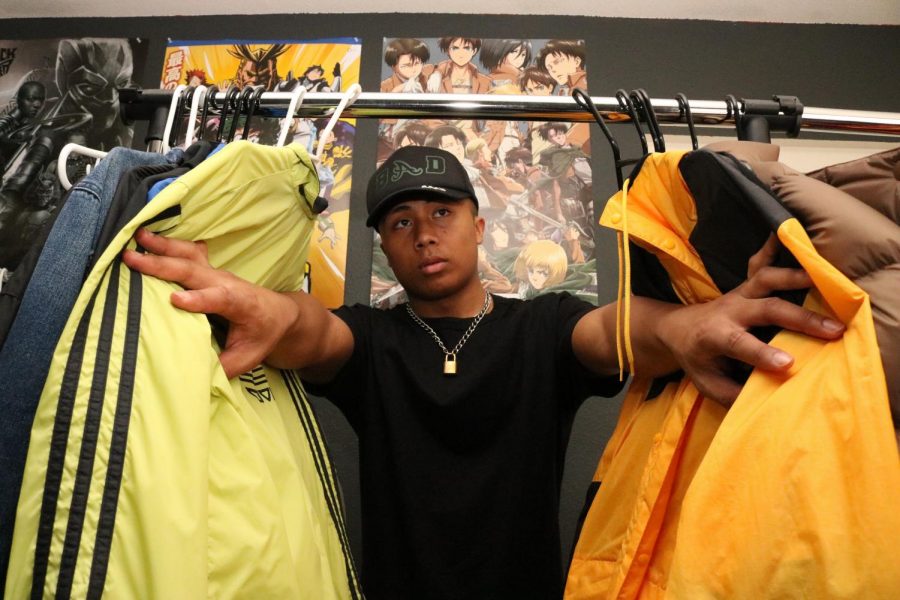 Contra Costa College business major Noel Sigua shops online for clothes and later resells them online too. His dream is to have his own fashion line. He spends much of his time learning about fashion trends in hopes of accomplishing his goal.

Noel Lucas Sigua, a sophomore at Contra Costa College, is a Bay Area street wear fashion influencer and, like many college students, hopes to develop his passion for clothes into a labor of love.

Unlike many people who discover their look through trial and error, Sigua developed his sense of fashion at an early age. Over time, he acquired what has now become his fashionable closet collection.

“Since I was little, I had an interest in clothes,” Sigua said. “Even when I couldn’t afford them, I would make sure to keep up with the industry. Throughout the years, I’d get something I wanted on occasions like birthdays or Christmas.”

He said his passion for fashion developed through his love for shoes. When Sigua was young, several of his uncles seemed to always have the trendiest shoes. Like them, he aspired one day to possess some of his own.

“I always dreamed of having a pair (of stylish shoes),” he said. “From time to time some of my uncles would give me a pair of their shoes.”

As Sigua grew older, his fashion sense began to develop and he acquired his first job that allowed him to save enough money to buy the clothes he wanted. He said his purchasing pattern evolved into what would become his street wear style.

During Sigua’s developmental years, rapper-turned-fashion-designer Kanye West began his own clothing line and became more of a fashion influencer — not only in the industry but to Sigua as well.

As time passed Sigua said he developed his sense of fashion based on influencers like Jerry Lorenzo, the founder of the street wear label Fear of God, and Virgil Abloh, the artistic director of menswear for designer Louis Vuitton.

Each of these designers had a working relationship with West, however each offered a unique twist in their perspective of what was trending.

Little did Sigua know in the same way he looked up to all these fashion designers, one day he would also be looked up to.

A longtime friend of Sigua, Andrew Salibay, said, “I would honestly say Noel (Sigua) is definitely a fashion icon. Through Noel, I’ve learned that fashion is another form of art. You get to express yourself creatively through fashion and you get to tell your own story through your own style.

“He definitely captures that. With fashion, I’ve learned everything is intentional and you definitely have to pay attention to the small details, which he is really great at.”

Sigua’s plans to earn a degree in business, which he believes will help the chances of reaching his dream.

Sigua said, “I am a well-rounded person and I think that fashion leads to many industries. I don’t consider myself to just be a stylist or just a model. I consider myself an entrepreneur. Fashion has different business aspects in it and hopefully one day I can own my own line of clothing — maybe even my own store.

“People follow trends,” he said. “Now that the world is more accepting of people who choose to identify as they want, people can wear what they want without having much criticism. Even if they are criticized, they don’t really care as much anymore because of what fashion influencers are doing.”

Because of his maturity and open mindedness, many doors have been opened for him offering him a possibility of succeeding in the fashion industry.

Sigua’s cousin Vince Gania said, “He’s always been someone who wasn’t afraid to take risks because his confidence was already present. The creativity he exudes through his fashion is really representative to how far he’s grown personally as well. The sky’s the limit for Noel and the attitude and creative perspective he has will further his goals in the fashion industry.”

With Sigua’s embrace of gender fluidity in the fashion industry, Isabel Pel, a UC Davis student and friend of Sigua, said, “ He’s not afraid to venture out into new styles and always tries to do something different. He always looks well put together. His style shows he’s not afraid to go outside the box and wear whatever he wants to wear.

“What makes him a good fashionista is that there’s never just a lazy day. Every day is an opportunity to try something new.”