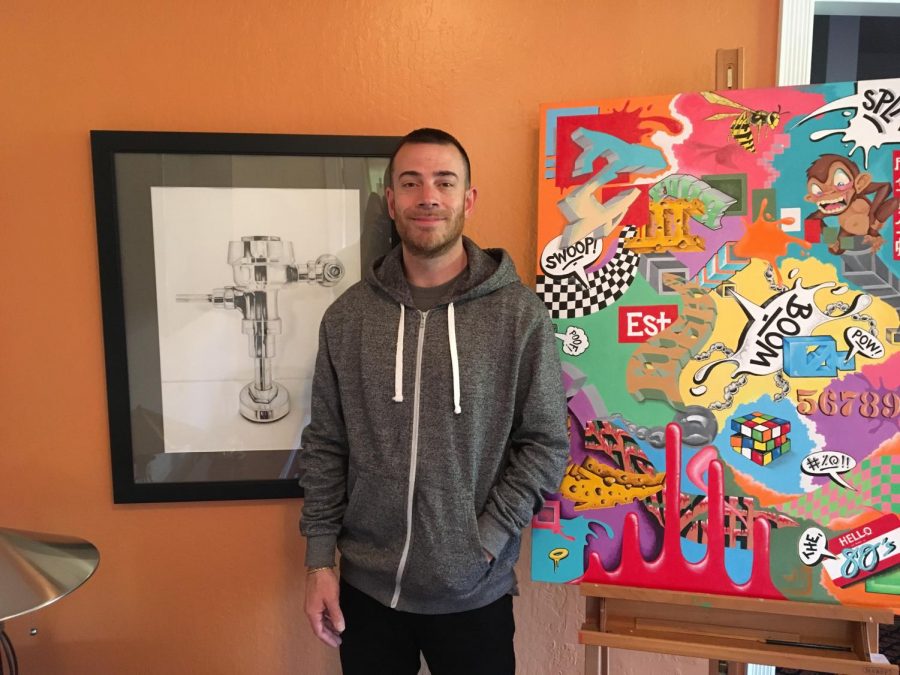 Art student Michael Chavez takes inspiration from moments in his life and incorporates them into paintings and sketches. This semester he works as a ceramics tutor in the art department.

Discovering talent and inspiration through art at a young age is the road art tutor Michael Chavez discovered when he was in fifth grade. He is able to show his creativity and passion through his artwork.

Growing up and living in Richmond for the entirety of his life, Chavez said he uses art to strengthen his connection to the East Bay.

For Chavez, making art has given him wings in life. The artist helps at local senior centers by putting on art classes and has showcased some of his work in Bay Area art galleries and shows.

Art major Anoukhan Kittirath said, “I know he is getting into the tattoo scene. He is very precise in his work because his talent shines through his artwork.”

As proof of his artistic progress, Chavez regularly sells some of his pieces.

Fine and media arts department Chairperson Anthony Gordon said, “Michael is one of those rare students that has talent and knows it, but is still able to be coached. If I don’t see him in class, I know he is working twice as hard at home.”

Kittirath said she has seen Chavez grow from a basic sculptor to an excellent sculptor.

“He is one of the best in my class,” Kittirath said.

Even with other obligations, including working multiple jobs, art major Chavez still manages to get his work done, Gordon said.

Although he considers himself a professional now, Chavez fondly remembers the art that inspired him as a child.

Chavez said, “Watching ‘The Simpsons’ in fifth grade intrigued me artistically because of all the bright colors and abstract things in the show. I started drawing the characters and found my niche with art and drawing.”

The Richmond native said he likes painting more than drawing because it is more permanent.

Chavez is currently enrolled in Art 240 (Intermediate Sculpture) and is a tutor for professor Lu Jiajun. As a tutor, Chavez has given advice to Kittirath on certain sculpture projects done in the class.

Chavez said, “Professor JJ (Jiajun) and Anthony are the main reasons why I am back at Contra Costa College taking an art class and helping the department and students.”

Gordon has known Chavez for about two years since he was a student in Gordon’s Beginning and Intermediate Drawing classes.

“If I could tell him three words they would be, ‘Don’t Burn Out.’ He definitely burns the candle from both ends,” Gordon said.

Chavez likes to create art that is going to be visually satisfying.

“I don’t like plain surfaces,” he said. “I like creating visually satisfying things for the eyes of others, as well as mine.”

“Making art makes me feel relaxed and that is what I love about it,” Chavez said.

Gordon said he would like to see Chavez get more recognition for his art and, given his work ethic, that will likely happen.

“It’s difficult not to like Mike (Chavez). Even when he’s under duress he manages to keep a positive outlook,” Gordon said. “Chavez’s positivity is contagious. He consistently raises the bar for himself and his classmates often follow in his footsteps.”

Chavez got into art when he was young because of the support that came from his family once they noticed his talent. This made Chavez push further with his art.

“Art was like the only thing I was really good at, so why stop doing it,” Chavez said.

He said he would like to make a living through art, but if he doesn’t, he will keep it as his hobby and not be derailed from his passion.

Gordon said, “He is genuinely a good person and a great person to be around. Running into him on campus is like running into an old friend — we just pick up where we left off.”