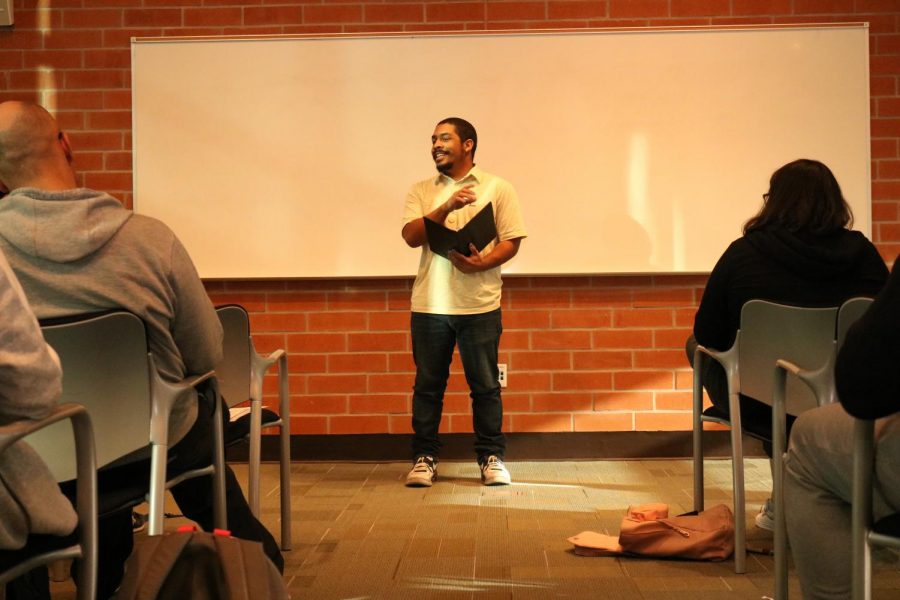 Speech Night brought together a big crowd of eager students who gathered in Fireside Hall on Thursday to escape the banalities of life and engage in a discussion of serious issues.

The participants had the opportunity to address the audience and share their thoughts with a speech of up to 20 minutes.

Many members of the Contra Costa College speech team are preparing for their national tournament in Reno, Nevada April 8-14.

Speech Night is an event for participants to practice their speeches in front of an audience before heading to a busy month of competitions.

After a quick introduction from the speech team, given by computer science major Kelanu Ranganath, four members of the team performed in front of an audience of about 200 people.

“Every time I see a new speech, I’m kind of blown away by all the new perspectives and ideas. Tonight, was no different,” Ranganath said.

Middle College High School student Aman Butt open the event with a persuasive speech about alkaline batteries and the problems surrounding their disposal.

“I always wondered how we actually dealt with these batteries and when I started to do research, I realized they were not being disposed of properly. They are just waste on a junk pile,” Butt said. “This is really detrimental to our environment.”

The next speech, presented by the team President Shreejl Luitel, dealt with the issue of human trafficking.

“Tonight was great — just the wide variety of speeches from different people and all the different stories are fantastic,” he said.

Sociology major Ariel Lo presented a persuasive speech as well and talked about prison abolition and how prisons are big money-earning entities for corporations.

“Tonight was amazing,” Lo said. “It was really great that we got the opportunity to bring the speech team out to the forefront, to let everyone know we’re here and this is what we do. Just to have the opportunity to share my speech in front of other students on campus was great.”

The last speech of the night was a personification of a gay gentleman, Terrance Flynn, who met serial killer Jeffrey Dahmer in a nightclub.

“I haven’t competed this semester and it was nice to be able to speak in front of people before nationals,” journalism major Xavier Johnson said. “It was cool to talk about a true story. This time I looked for a fun piece — something everyone could enjoy.”

Audience members who attended Speech Night were impacted by the preparation and public speaking ability of the team.

“I thought it was really brave of everybody to go up to the stage and speak like that because I’m taking a speech class and I know that’s pretty hard to do without a lot of practice,” biology major Marissa Kitchen said. “I really liked the last speech. It pretty interesting.”

Even though the event was a success, the big turnout surprised organizers.

“It was incredible to see so many people come out tonight,” speech team coach Randy Carver said. “We expected (a group) half this size. I think the presenters did really well.”

“The team gets about a week and a half to rest, then we are going to be back with nationals,” he said.