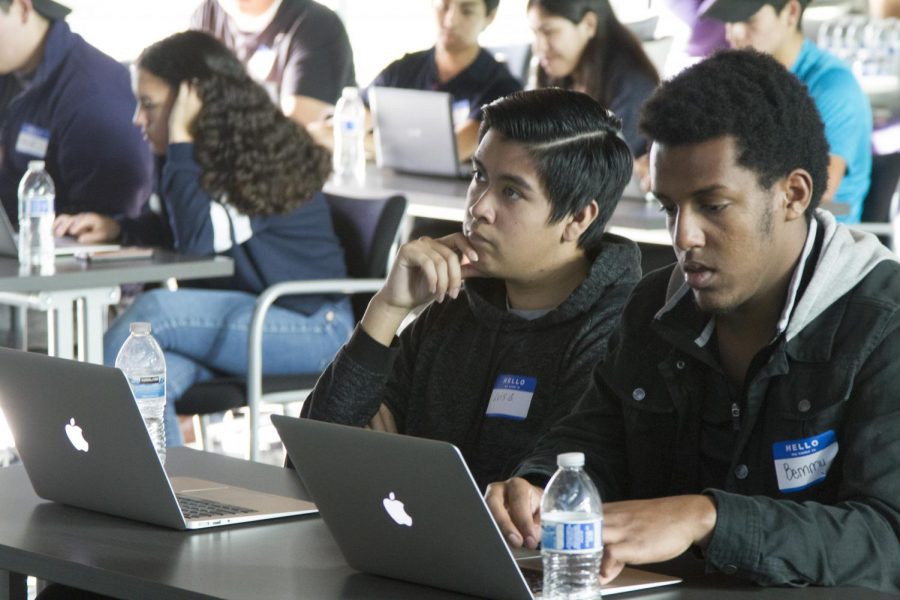 Students take notes while listening to a presenter at one of the free coding events organized by richmondCodes.

The two co-founders believe that technology is one of the best tools they could use to motivate young students with marginal opportunity and fewer resources.

“We want to close the equity gap between the privileged and the underprivileged,” Akubuo-Onwuemeka said.

Luitel said, “There aren’t many tech programs in the Richmond area compared to other places in the Bay Area and we wanted to change that.”

The nonprofit provides one-day workshops where they teach students the basics of coding by using a tool called “Scratch Programming.”

They also make it a point to try to “break stereotypes” and reinforce the idea that “anyone can code.”

Aman Butt, a richmondCodes intern who helps create the curriculum they teach said, “Forty-eight percent of people in the STEM field are white men. Having this program gives us an opportunity to promote diversity and to give knowledge to underrepresented communities.”

In order to arrange the workshops at these schools, Luitel compiled a list of principals at their target schools and made use of Google application programming interfaces (APIs) as a way to swiftly reach out to them while also using coding techniques.

For their “Hour of Code” event held this past December at Contra Costa College, the duo made sure to have guest speakers from notable tech companies such as Microsoft, Pandora and Auto Desk.

There were more than 50 people in attendance.

For their workshop at Washington Elementary School, the feature speaker was Abel Relagado, a representative of Hack the Hood.

Hack the Hood is a non-profit group that introduces underprivileged youth to coding through tech boot camps.

The program is mostly paid for out-of-pocket, but the Contra Costa College STEM department has funded some of their events.

“It wouldn’t be right to charge those in low-income areas for our services,” Akubuo-Onwuemeka said.

The two co-founders have a group of nine interns that help them accomplish their goals.

They have meetings on Fridays from 2:30 to 3:30 p.m. where they discuss the curriculum they will teach, who they will reach out to and how to improve the program.

Luitel says they make it a point of emphasis to have youth of color as interns because, when they visit schools, it gives the students the chance to see people that look like them showing an interest in technology.

They also take into account a school’s demographics and test scores when determining which schools to visit.

Advertisement for richmondCodes is accomplished through their Instagram page @richmondCodes and their website richmondCodes.org where they chronicle their progress and provide information on what the organization has to offer.

They have several workshops scheduled for March through May.