Comedy offers satirical look through a variety of Hispanic experiences 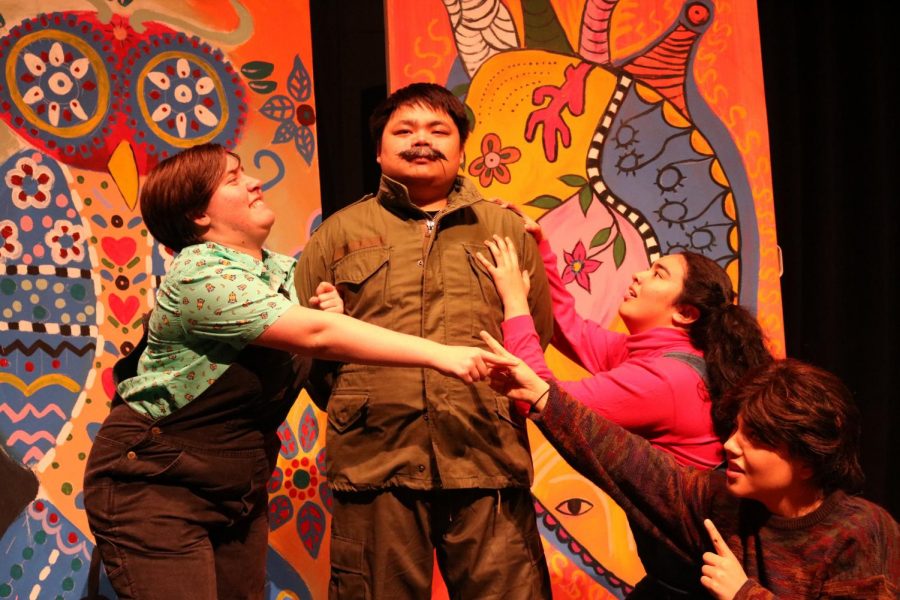 Joshua Saephan (second from left), who plays Fidel Castro, is questioned by Sydney Smith (left), Jelaine Maestas (second from right) and Melissa Velasquez (right) in a skit during a dress rehearsal of “The Hispanick Zone” on Monday.

The Contra Costa College drama department will take on the Latinx lifestyle and the stereotypes faced by that community in the new production, “The Hispanick Zone, a Comedy Extravaganza.”

“The Hispanick Zone” will run for two weekends, beginning this Friday, Saturday and Sunday in the John and Jean Knox Center for the Performing Arts. The performances will conclude next weekend, April 26-28.
Friday and Saturday shows will begin at 7:30 p.m., Sunday matinees begin at 3 p.m.

Drama department Chairperson Carlos-Manuel Chavarria, who is also directing the play, said “The Hispanick Zone” is a satirical play that emphasizes Latinx stereotypes.

He said the play consists of a variety of comedic skits that are connected through a line of stereotypes.

The play has a cast that includes many characters, all with different relatable traits. A group of 11 students, including Chavarria, will play more than two characters each with some even playing three or four different characters, Chavarria said.

He said the reason the department is producing a play on the Latinx community is because the campus is an official Hispanic Serving Institution with most of the students being Latinx, he said.

Although the play is primarily about the Latinx community, Chavarria said that theater is universal regardless of racial classification.

“While the Latinx audience may find a personal and direct connection with the themes of the play overall, the non-Latinx audience will still enjoy the production and will be able to identify with the issues presented in the play,” he said.

Fine and media arts major Gregory Lee will play a total of three characters, with the first being an unusual role. It is described as a kid who is coming out as a Jewish young man in the first scene.

The second, El Bello, depicts a handsome hotshot who is popular in the Telenovela scene. The last character Lee is playing is Mr. Panama, a loud character that appears in the last act.

“I think people should come and watch because is it educational, has very powerful humor and it’s entertaining. You’ll be laughing,” Lee said.

To prepare to play multiple characters, Lee said he had to separate each character and associate personality traits from other things such as TV shows, movies or any form of media. He perfects this by walking, talking and carrying himself as the character would carry itself.

Watching the sitcom “One Day at a Time” on Netflix helped Lee a great deal while preparing.

“I want to bring the same energy to the show,” he said.

Sydney Smith, who has yet to decide a major, is acting in the upcoming production and describes the show as a big comedy satire of Hispanic culture from a Hispanic point of view.

Smith said, “The comedy is greatly exaggerated, cheesy and not too serious.”

Smith will have a total of five leading roles in the production, with the first being Boy 1. He is a child who wants to be a manly man and feel like the greatest hero in the world.

The second character is an elderly housewife who lives by gender roles and is driven by dishing out gossip. The third is a racist and shallow boss character who runs a factory and only hires immigrant workers.