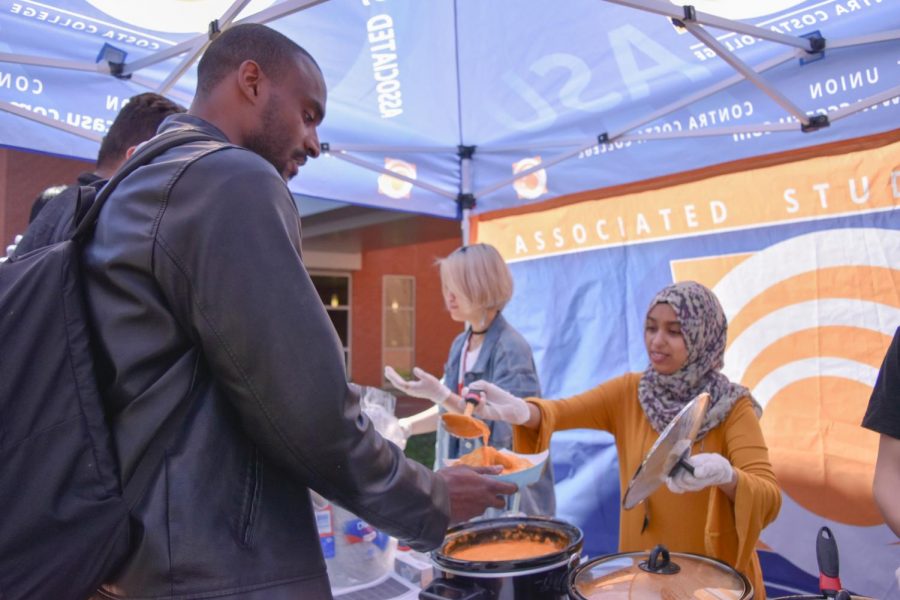 Chicano studies major Nicholas Kimmons is served a bowl of nachos during Club Rush on Thursday.

With the multiple community-building entities Contra Costa College offers for its students on full display, coupled with a lack of student involvement, the bi-annual Club Rush event did not measure up to last semester’s gathering, yet still promoted the importance of togetherness.

Preparations for the event began as early as 9 a.m., with CCC staff placing tables outside of Fireside Hall on April 9 for the festivities.

By noon, the sparsely populated event was in session.

The Associated Student Union organized the event to invite students to join the clubs at CCC.

Currently, there are more than 15 clubs that are active on campus.

Some of the clubs present at the event included the Black Student Union (BSU), Christians on Campus, the Gaming Guild Club, Health and Human Services Club (HHS), and the International Students Club, among others.

Kristin Lobos, president of the Health and Human Services Club, said the event offers students an opportunity to get involved and educates students on “advocacy and policy.”

“The event showcases all of our clubs on campus,” Lobos said. “But also lets our students know about our government and that we have a voice.”

Lobos said the HHS Club provides service to the community and helps students to become more aware of their health and wellness.

According to the health and human services brochure, the program and club “help people cope with life’s challenges — comfort people in crisis.”

Nicole Robinson, vice president of the Health and Human Services Club, believes the event invites students to become more aware of what’s going on in their community.

“We have a lot of diversity,” Robinson said. “The event pulls everybody together.”

BSU President Armond Crowshawn used the event to promote the importance of the black community as well as some upcoming projects the club has prepared for the rest of the spring semester.

“The event gives people the opportunity to know what clubs are on campus,” Crowshawn said.

The BSU’s focus is to empower the black students on campus, Crowshawn said. “Not only on campus, but in the community as well.”

BSU members have partnered with GRIP Family Housing Program in Richmond in an effort to help those who need access to food or shelter.

The Veterans Resource Center members and advisers also acknowledged the event does a lot to provide a form of “unity” and “togetherness.”

According to the Veteran Resource Guide, “The mission of the Contra Costa College Veteran Services is to assist America’s veterans in obtaining all the federal and state educational benefits and entitlements they have earned by serving in the United States military, and to provide guidance and support services that will aid veterans in their transition to academic and civilian life.”

The VRC Club will be holding an exercise event on May 3 at CCC, where students will be given a chance to win a $100 prize.