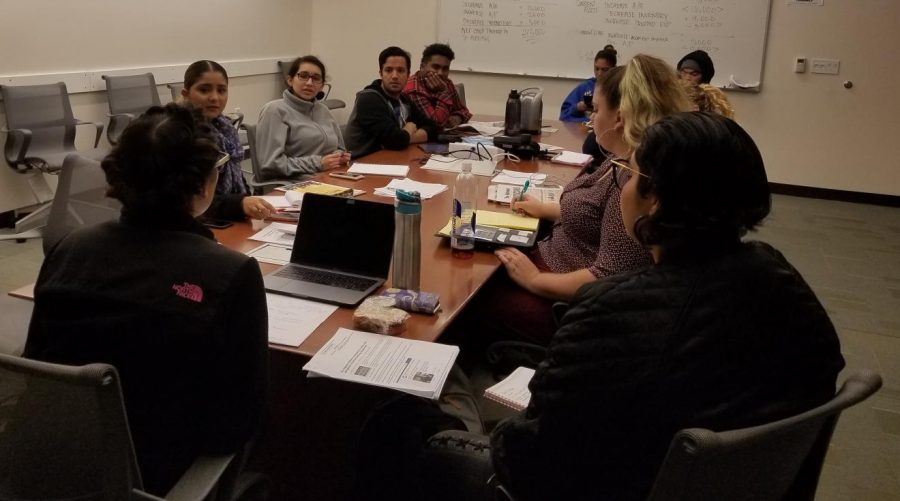 President of Club Affairs Rebecca Hernandez (back to camera) informs club representatives of the history of sexual abuse and harassment of two VP of student services candidates during a meeting of concerned students hosted by the Associated Students Union meeting in the Student Life Office on Nov. 15.

The Associated Student Union (ASU) is rearranging its board while it gets ready for its next election where students at Contra Costa College will be able to select student representatives.

The ASU is the student government that represents the interests of students at CCC.

Currently, no date has been set for campus elections this semester.

“We have a lot more college students on the board. People who’ve been involved in clubs. They were organizing activities on campus before they even thought about (joining the) ASU. They know a little bit about how the campus works,” Ramirez said.

Upon requesting further information about the 2019 election process, ASU President Rebecca Hernandez was not available for comment.

Generally, there are five executive positions required to be up for election every year. President, executive vice president, president of clubs, secretary and treasurer are the available seats.

“As far as knowing and having those conversations with managers and deans, this is probably the most involved (ASU Board) I’ve ever seen.”

The bylaws also list all the requirements of an ASU Board member, unless overridden by the ASU Constitution or ASU Bylaws. Executive senators must have a GPA of 2.0 or better and cannot hold more than one ASU executive position. Also, they are restricted from serving as president of any campus club.

Senators vying for executive positions must have held elected office for one year.

Candidates must go through the petition process before the General Election and have been nominated by a member of the ASU Board.

ASU Director of Public Relations Preston Akubuo-Onwuemeka was nominated by Aaron Watson for the ASU presidency during an ASU meeting on March 19.

Akubuo-Onwuemeka said he wants to continue the work that ASU has done so far.

He wants CCC to feel like a second home for students, not just us a place where students complete their classes.

“I’m running for ASU president because I can relate and represent both the high school and college population on the campus,” he said. “Within the two and a half years I’ve been on the board, I’ve observed that our past and current, ASU presidents have done a phenomenal job in governing the Associated Student Union of Contra Costa College.”

The board has other positions such as director of public relations, director of shared governance, director of external affairs, parliamentarian and student representative.

These positions will either be vacant or open for re-election.

Current ASU Vice President Laciee Brown said “We’re still figuring out exactly who’s going to be a fit for what positions. We don’t want to just nominate people just to nominate them.

“We want the proper people who are a fit for the positions to be in those positions. We’ve had a few people stepping down and switching positions.”

One of the vacant positions for next semester is vice president of club affairs.

“The next ASU VP of club affairs needs to successfully organize Club Rush, attend a majority of the ICC meetings and adhere to the concerns of the clubs on campus,” Akubuo-Onwuemeka said.

“We want to be sure that whoever becomes president or any other executive officer position, has knowledge of what the campus needs and what the students need. “