Ending hunger one bowl at a time 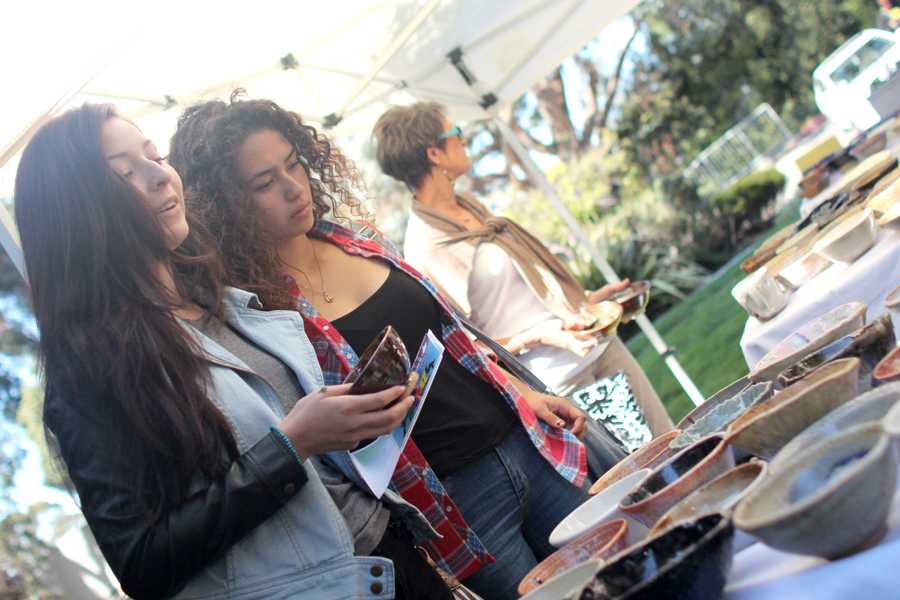 Middle College High School student Arling Apaez (left) decides which bowl to purchase at the annual Empty Bowls Project held outside of the Applied Arts Building on Friday. The event is hosted jointly by the art and culinary arts departments to raise awareness of food scarcity in the United States with the ultimate goal of ending hunger.

The combined efforts of the culinary arts and art departments raised around $2,000 to fight hunger on Friday, marking the fourth year the college has hosted the Empty Bowls Project.
The event took place outside of the Three Seasons Restaurant and the Applied Arts Building from 11:30 a.m. to 2 p.m.

The purpose of the Empty Bowls Project, a grassroots organization started in 1991 in Michigan, is to raise awareness of food scarcity in the United States with the ultimate goal of ending hunger.
Instead of paying admission, supporters purchased a bowl, then chose from the various soup options available and had the bowl washed and returned to them.

Since buying the bowls serve as donations, students or community members are asked to keep a bowl as a reminder of all the empty bowls in the world. Then, the money raised is donated to a local organization working to end hunger.

Students paid $5 for a bowl, while non-students paid $10.
“All the sales from the bowls are given directly to the Bay Area Rescue Mission and the materials used for the dishes were donated by vendors like US Food Service, people we usually buy from,” culinary arts department professor and Chairperson Nader Sharkes said.

In preparation for the event, students in pottery courses crafted ceramic soup bowls and culinary arts students donated ingredients for the soups.

Adjunct fine arts professor Mary Law, who worked with ceramics students to craft bowls for the event, said she and Sharkes wanted to partner with the Bay Area Rescue Mission in Richmond because it is the most local homeless shelter, and that Sharkes’ past experiences with the organization have been good.
Law said the first time the Empty Bowls Project took place at Contra Costa College was in 2011.

It was held again in 2012, but last year the event was hosted only by the culinary arts department due to scheduling conflicts between the fine and media arts department and culinary arts, she said.
Sharkes said the bowls used last year were donated by the Bay Area Rescue Mission and were decorated by children to make up for the pottery element.

Law also said that the clay is donated by East Bay Clay and that she spends two weeks out of the semester teaching students how to make bowls just for this event.

The leftover bowls are stored away in ceramics and Law said there are still 700 bowls remaining aside from what was used on Friday.

Chemistry major Silvia Osornio looked for tone and texture when searching for her custom bowl.

“I heard about the bowls event a couple times last semester and I read about how it helps people who don’t have much to eat and I felt it was a good idea, so that’s what really sold me on it,” she said.
After donating, hungry contributors were able to choose from soups like clam chowder with or without pork, chickpea and veggie, and the potato, lentil and bacon soup.