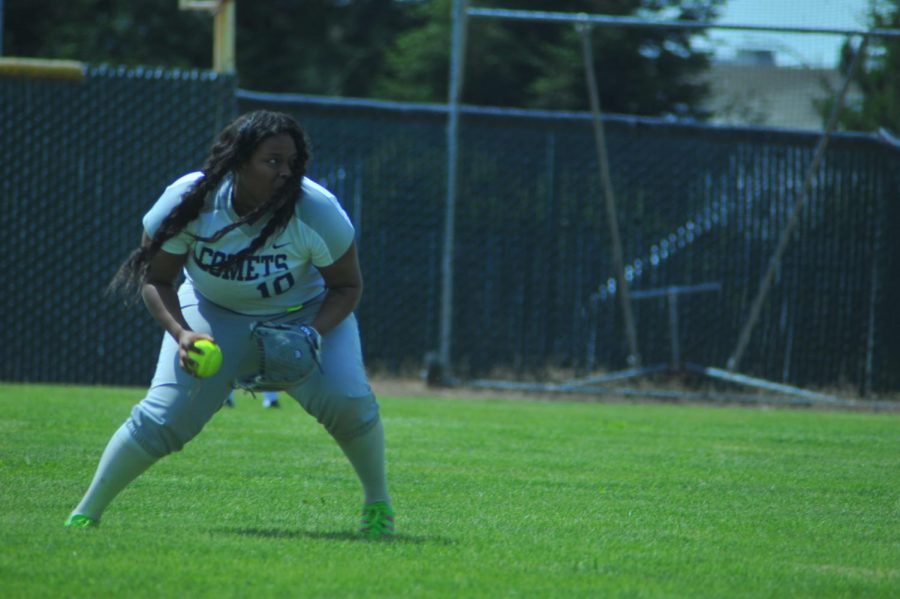 Comet infielder Brianna Williams picks up a pop up and gets ready to throw it during Contra Costa College’s 21-2 loss against Mendocino College on April 19.

First place Solano Community College (21-13 overall and 14-0 in the Bay Valley Conference) continued its dominating play with a 26-0 and a 21-0 doubleheader sweep against Contra Costa College April 19 at the Softball Field.

The Falcons entered the doubleheader riding a six-game winning streak led by its red-hot offense. Solano outscored its previous six opponents by 59 runs, fueled by a .333 team batting average and eight home runs.

The Comets (0-10 overall and 0-10 in the BVC) used the game against the surging Falcons as an opportunity for self-assessment against stiffer competition.

CCC softball coach Taylor Harris said her team needs to swing at strikes for the next game because they swing at balls, not strikes, against the Falcons.

“We take strikes and don’t swing at them. We swing at balls. But that (recognition) comes with the more games we play,” Harris said.

All 11 Comet players made contact with the ball, but each knock was either at someone or a routine fly ball.

In the second game of the doubleheader, both Comet pitchers Savanah Spencer (0-5) and Larissa Carvalho (0-2) faced more than 10 batters each with Spencer facing 13 and Carvalho facing 20.

That total was nearly as many as both Solano starting pitchers faced in the entire doubleheader at 34.

Mistakes at inopportune times — like a two-out, bases loaded infield fielding error — made the score more extreme than CCC’s overall performance should have indicated.

Despite the lopsided outcome, Comet center fielder Alejandra Cuellar (.111 batting average) said the team has improved a lot since day one.

“We give it our best each inning,” Cuellar said. Cuellar gives her teammates credit for playing hard even when losing by 26 runs.

“Come to practice every day we have it and work on batting and anything I need to do (to improve),” Cuellar said about how she can continue to get better.

Solano led off the opening game of the doubleheader with a 10-run first inning, followed up by a three-run second inning and one run in the third.

Solano’s offense erupted once again in the fourth and fifth innings, scoring 12 runs between both frames.

The Falcons were led by third baseman Alaena Selden (.434) and left fielder Courtney McGraw (.422). Both ended the game with five RBIs. Selden had two RBIs in the top of the first inning aided by misplayed fly balls to left field and center field after batting through the order.

The Falcons continued their scorching offensive performance in game two of the doubleheader by scoring 21 runs. Pitcher Britney Czelusniak (2-4) threw a no-hitter against the Comets while only facing 15 batters and striking out four.

Game two started with a lead off triple by Falcon Aleya Turner (.458), followed by a Selden line drive RBI double to left field. Six of the following seven batters reached base safely with three walks, one single, one double and one runner reaching on an error.

Falcons coach Nikki Gentile said her team was working on squaring the ball up and getting hard contact because of it.

“We knew the pitching was slow and we wanted to square up the ball to get line drive hits up the middle,” she said.

Gentile said the team’s goal this week was to succeed during situational at bats. The coach wanted her team to hit the ball on the ground while working on maintaining a front leg forward stance, which allows batters to hit with more power.

The Falcons’ technique of swinging squarely through the zone led to Solano running the base paths successfully and finding home plate early and often.