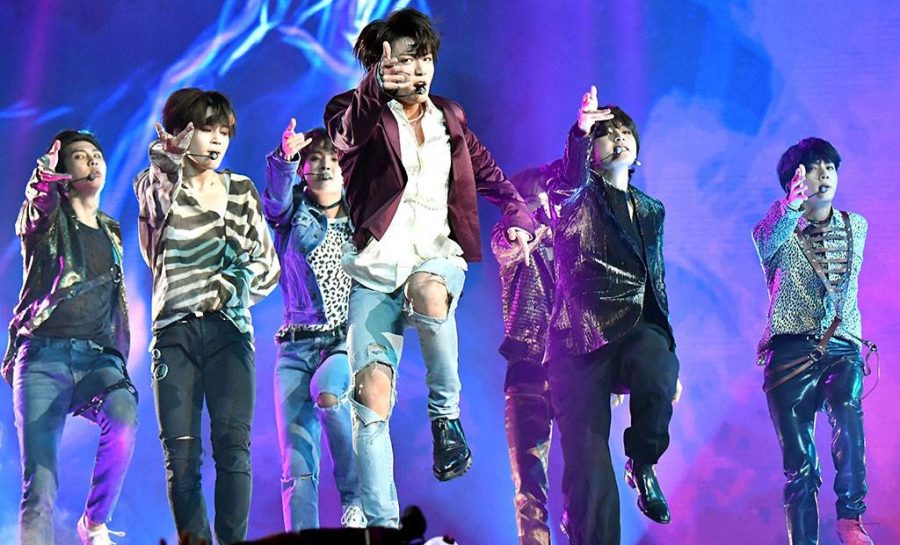 BTS performs a choreographed group dance routine and sings during one of its concerts.

Over the past few years, international Korean boy group BTS has been skyrocketing in popularity and more recently the group’s fandom, or “ARMY,” has cemented the newcomers on top of the industry’s most influential charts.

Their popularity has finally reached U.S. fans through collaborations they have done with known American artists like Steve Aoki, Desiigner and Wale.

Big Hit Entertainment, BTS’s production agency, has announced many more collaborations planned for the group with more artists in the U.S.

In Korea, BTS is known as Bangtan Boys, which translates to Bulletproof Boy Scouts. But the group adopted the abbreviation BTS for marketing.

Ho-seok serves as a rapper, songwriter, dancer, producer and singer.

Park Jimin and Kim Tae-hyung are both 23 year olds and 21-year-old Jeon Jeong-guk is a singer, songwriter, dancer, and record producer.

Dedicated fans call themselves “ARMY,” which stands for Adorable Representative MC for Youth. For BTS, the ARMY helps, protects and supports them like a real army would.

ARMY has been the biggest factor in the group’s success since BTS’s introduction and is a unique group of diverse people from all ages and backgrounds. The fan base makes its own insider jokes that only ARMY aficionados can understand.

The fan base also has internal beefs over which BTS member they like over others.

However, there are also bias wreckers. That happens when another member of the group begins to steal your attention away and makes you question your initial band favorite.

BTS has recently released a new album called “MAP OF THE SOUL: PERSONA” on April 12.

The project already has two songs on the Billboard top 100.

This album has seven songs including top hit “Boy in Luv,” featuring Halsey. The album title is inspired by Jungian philosophy, as related through Murray Stein “Jung Map of the Soul,” as reported on Billboard.com.

The group already has dates and locations set for concerts, however, BTS shows consistently sell out in a matter of minutes.

Besides being uprising international music artists, BTS has been strong advocates for youth causes and world issues. Last year they spoke in front of the United Nations to address concerns affecting young people.

Many BTS ARMY members have started fundraisers under the group’s name and donated all the money to local charities, zoos with endangered animals and homeless shelters.

The group has a large impact on fans’ lives because ARMY members feel a connection with them through social media.

V-live is a live streaming app where artists have more interaction with fans because fans are allowed to watch the members do silly challenges, games, dances or talk about what is currently happening with the group in general. This gives fans more access to their favorite BTS members since they are constantly under the camera’s eyes.

Either way, the boys have learned to manage international fame through culture changes and problems with bigger fame.

In 2018, the band released two full length studio albums “Love Yourself: Tear” and “Face Yourself,” which both skyrocketed to the top of the charts in Japan and Korea.

A new studio album is in the works as their popularity grows across the globe.