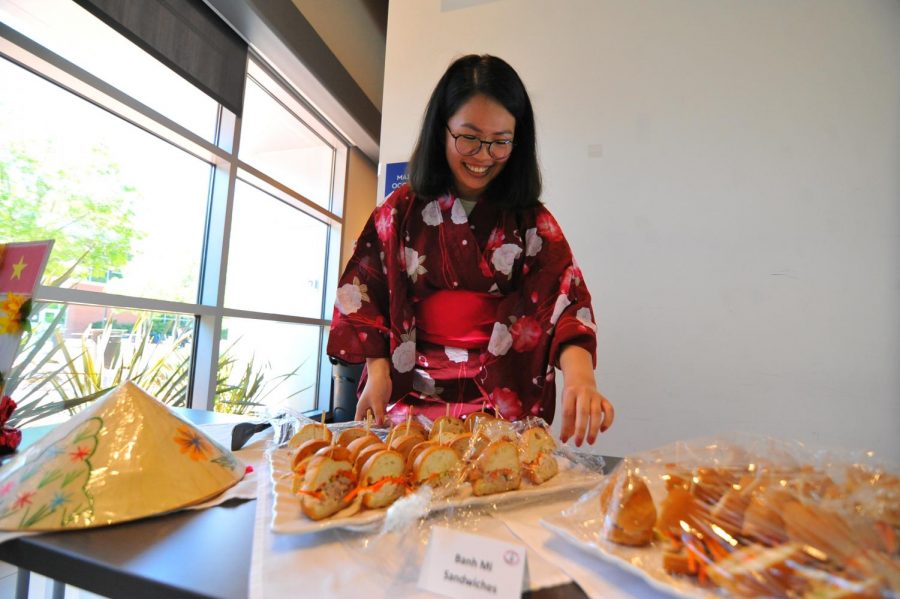 An exchange of cultures from across the world filled plates with a variety of flavors and introduced the campus to the International Students Club on April 24.

The cultural event, which went from 1-3 p.m. in Fireside Hall, showcased the diversity within the club.

The organization wants to serve as a beacon for students from different backgrounds providing a comfortable space on the campus, ISC President Miguel Salvador said.

Students were invited to partake in food selections including options from countries such as China and Mexico.
Salvador invited the public into the well-decorated hall where tables were set with festive centerpieces including flags from different countries. He began the event by taking a microphone and

introducing a new beginning for the student organization.

“This is a long-standing club, and for the past few years we haven’t been gaining enough new membership,” Salvador said. “We wanted to get noticed for doing something for the campus.”

The club provided the lunch event completely free for its 50 participants.

“We’re the International Club, so obviously we want to get the attention of international students,” he said. “We have a Japanese and Taiwanese students serving food as well,” he said.

And why was the club hosting a free luncheon event?

“Previous club advisers told us the club had done something similar to this in the past. So we decided to try it out for ourselves,” Salvador said.

“Currently we don’t have a lot of members, so we took the initiative to create this event so students notice us and hopefully we get more members.”

The International Students Club wants to serve as a place where students from different backgrounds feel welcome and can get to know each other.

As soon as the doors opened after 1 p.m. students and staff lined up to be served.

“I heard about the event from a student and came out to support them,” Center for Science Excellence Director Setiati Sidharta said. “I invited my colleagues from the STEM departments to come support the event as well.”

The event was well attended with many students and staff quickly adding up to over 50 participants.

Club adviser Jenna Hornbuckle welcomed everyone at the door.

“I’m proud of the group coming together,” Hornbuckle said. “They were able to organize and have fun planning it.”

She said all students should consider joining the club, not just students from different countries.

By halfway through the event the room had a line along the glass walls in Fireside Hall.

In a show of support, more students and faculty had shown up than the club’s students were expecting. They ran out of “passports” they handed out to be stamped as attendees received servings of food from different cultures.

However, they didn’t run out of food.