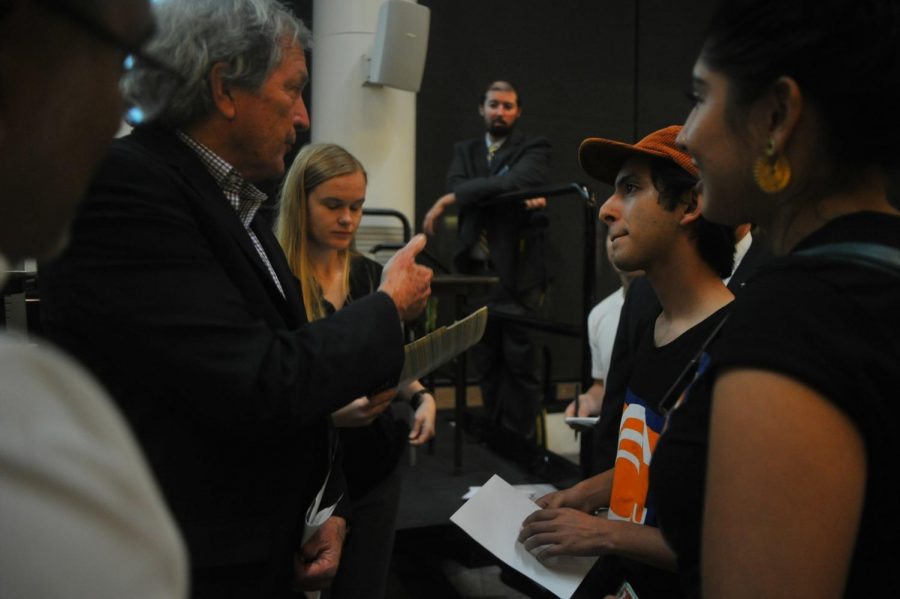 Racism has become a landmine many are afraid to walk past, but it is time to race toward the issue because of the extremity of an emergency it has become at a district college.

DeSaulnier has served as the U.S. representative for California’s 11th congressional district since 2015.

The discussion was in response to the racist incidents that DVC administrators hope will stave off similar occurrences in the future and centered around issues of increasing cultural awareness and equity concerns for Bay Area residents.

On March 6 hateful and racist graffiti aimed at African American students was discovered in the men’s rest room in the Engineering Technology Building at DVC.

“Conversation is the first step,” DeSaulnier said when it comes to handling issues around racism. “Engaging people and having a discussion with them (is a good start).”

DeSaulnier said he was surprised by how much resistance he met when helping organizing the event.

“A lot of white people and people in power don’t want to talk about (racism),” he said. “If I were a student here, I would insist that people in positions of power make decisions.”

DeSaulnier also said he would support bills on the floor of the House of Representatives to fund the fight against racism.

The congressman also said there will constantly be friction between communities and it is important that people talk about it, especially in a global economy.

He also said hosting an event with a Bass, who serves as chairperson of the Congressional Black Caucus, is a good start to creating a more inclusive campus. Their discussions seem to be gaining momentum in a positive direction judging from the full attendance of the event.

The DVC student dining room had been cleared to welcome a few hundred concerned people who came out to hear DeSaulnier’s message. However, the crowd was made up of older people. DVC students had raised concerns about the racist vandalism since it first occurred early this semester, but weren’t present in large numbers to express their outrage to DeSaulnier or Bass.

In addition to the congressional representatives on hand, there were also UC Berkeley professors in attendance who offered researched opinions on the issue of segregation and identity politics.

Contra Costa Community College District Chancellor Fred Wood also spoke about changes that need to be made across district campuses.

“At the district level, we coordinate activities and talk to police about monitoring areas better,” Wood said. “We continue to talk about (placing) video cameras (on campus) with the police.”

Wood said administrators feel the tension when acts of racism, like the posting of racist vandalism, occur. “It’s hard to engage people around what sometimes can be difficult conversations around race,” he said.

DVC President Susan Lamb is taking steps to foster discussions on race relations on the campus.

She said she is working with the college’s Academic Senate and Classified Senate to facilitate the development of a fall All-College Day forum focusing on “Anti-Racism and Creating Inclusive Environments.” She was excited to show what steps have been taken in an attempt to tackle this issue.

DVC faculty have also worked with its college council to form a task force whose purpose is to discuss student demands and provide recommendations back to the council, Lamb said.

A delegation of Associated Student Union senators from Contra Costa College attended the event to support their sister college students.

“We are showing that we don’t tolerate racism on our campuses,” ASU Senator Alfredo Angulo said. “We are going there to express our concerns to Rep. DeSaulnier.”

A student representative from DVC came to CCC’s InterClub Council (ICC) meeting and told those in attendance that they felt underrepresented on their campus, Angulo said.

DeSaulnier praised the East Bay for the number of seasoned researchers who work to document racist incidents in an effort to create change. The academic researchers in the room were well-versed in their subject matter.

Steven Pitts, associate chairperson of the UC Berkeley Labor Center, was able to teach attendees about what segregation looks like — and with hard data. Research presented highlighted how segregated the Bay Area has become.

Data also showed how clumped areas with high percentages of white people were, mostly near Walnut Creek, and higher percentages of Latinos, mostly near San Pablo. The discussions were focused primarily on understanding what the current state of race relations is within the county.

“The Bay area is only 40 percent white, but they still make up a majority in numbers,” Pitts said.

Panelists explained just how complex the fight against racism truly is. Panelists agreed that if people look at racism as a matter of separation and judgment, even if they cleared people’s judgment, there would be structural racism in place.