A lack of awareness 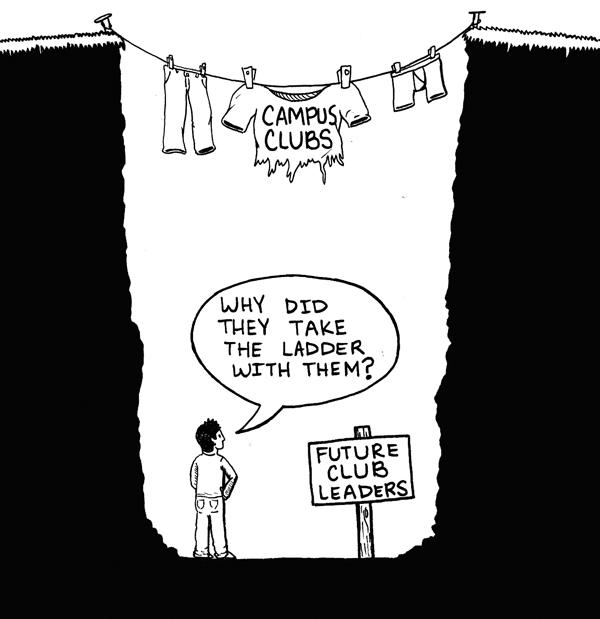 Student leaders such as Deandre Russell and Nora Rodriguez should be applauded for their successful efforts to awaken a dormant Black Student Union and create the first Republican Club on campus, respectively.

It is saddening, however, that the number of clubs at Contra Costa College has decreased by half over the summer. It has limited students’ ability to unite on common grounds and connect with the campus community.

Associated Students Union Vice President of Club Affairs Safi Ward-Davis said that at the start of the spring semester the college had 22 active clubs.

She said toward the end of the spring semester the number of active clubs had dropped to 20. And by the start of this semester, 20 clubs had suddenly dropped to 11.

She said the clubs have diminished by half because leaders from those student clubs transferred to four-year universities without ensuring the clubs’ future existence.

The handing down of leadership roles and the accompanying knowledge that comes with any position of authority to inbound students is absolutely necessary. It is something that both Russell and Rodriguez understand well, considering they have no predecessors to learn from as they now don roles of leadership and continue to garner involvement for their respective clubs.

Because a mere 11 clubs remain, the scope of opportunity for similar minded students to find a group on campus where they feel open to express themselves and can freely exchange ideas is narrowing. This also restricts students opportunities to transfer by disallowing them a chance to polish their resumés.
Without a place on campus to get involved and feel a sense of belonging and community, students become distant and apathetic.

Students who feel the college only serves one of their interests fail to acknowledge such an institution for what it is: Not just a place of learning, but a place of interpersonal development and self-exploration.

Extra curricular activities are some of the most important resources for students who are dealing with the stressors of collegiate life, as well as day-to-day life. Students both need and deserve places on campus where they can go to get help from people they relate to and trust.

Students looking to join a club or to inquire about starting a new club should attend Inter-Club Council meetings in HS-101 on Tuesdays beginning at 2 p.m.

Like-minded individuals may also attend Club Rush and Fall Festival hosted by the ASU in the Tennis Courts next to Comet Stadium on Oct. 28-29 from 11 a.m. to 2 p.m.

For a campus that boasts diversity, having 11 clubs is simply unacceptable.

Our voices, interests and dreams are as diverse as we are. Certainly they cannot all be captured by only 11 clubs.