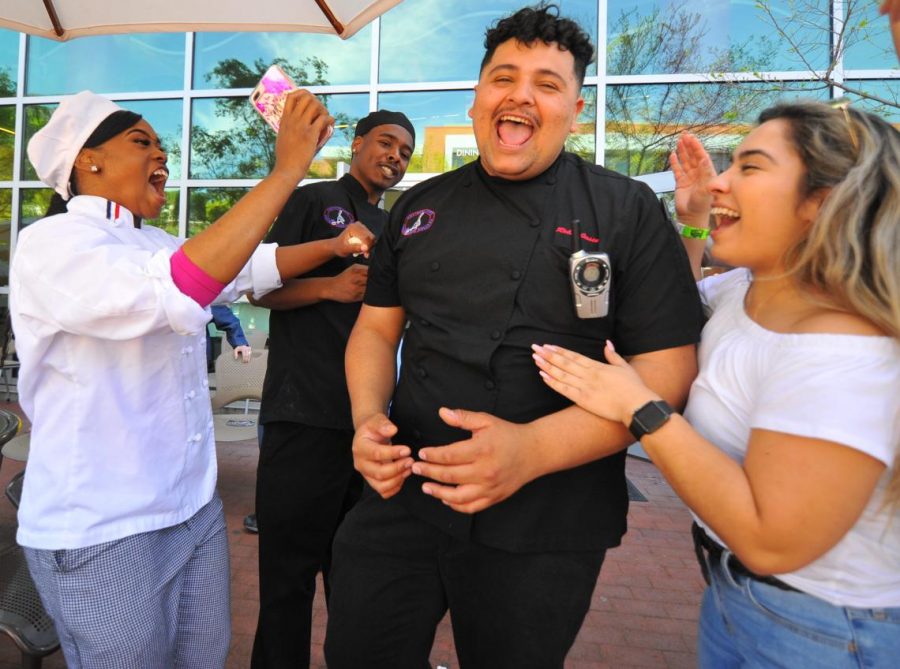 Delicious food and glasses filled to the brim were served in a campus courtyard as the community helped fund a learning experience abroad for a collection of lucky culinary arts students on Sunday.

The Campus Center Plaza was filled with people from all walks of life as the culinary arts department hosted an event aimed at introducing community members to local businesses.

The 12th Annual Food and Wine scholarship fundraiser event was a thrilling afternoon hosted from 11 a.m. to 2:30 p.m.

The plaza, the Student Dining Room and Fireside Hall were filled with booths hosted by food and beverage vendors from throughout the Bay Area. The event raised money to provide 10 students with a $10,000 scholarship for a 17-day trip to Italy where they will study that country’s culinary habits and delights.

The names of students who will be going to Italy were announced during the event, and after the announcement, many celebrated with friends and family.

“I still just learned about it and I’m so happy,” scholarship winner and culinary arts student Mikaylah Cayanan said. “We worked our butts off and the hard work paid off.”

All the students who received a scholarship deserved one, she said.

Cayanan said learning is the most exciting part of the experience.

The event was flooded with smiling patrons who were served delicious samples provided by restaurants and businesses from around the Bay Area.

“I feel excited and I’m looking forward to furthering my craft,” Williams said.

Williams said he sees the trip as an opportunity to develop as a professional.

“There are lots of different cuisines and the only way to get better is to get to the roots,” he said.

The actual food and drinks at the event were a luxury as multiple restaurants, boutiques, breweries and vineyards served amazing offerings.

The food from the culinary arts department was also outstanding and stood up to the professional quality food on display. Samples ranged from jambalaya and sliders to caviar and margarita truffles.

An entrance was set up at the steps in front of the Amphitheater behind the Student and Administration Building where patrons were given a wristband and a glass they would use to sample drinks.

Local businesses such as East Brother Beer Company, Kinder’s Meats and Curbside Kitchen were highlighted, as well as some alumni of the culinary arts department.

“We have some of my own students returning to help with the event,” culinary arts department Chairperson Nader Sharkes said.

It is important to keep connections and give opportunities to students, both current and prior, he said.

“The event is one the most important fundraisers of the year for the department,” Sharkes said.

And, according to Sharkes, it’s also known as “one of the largest wine events in the East Bay.”

During the event, live music was provided by the GTS Band, filling the space with jazz. There was also a fundraising auction that took place on the steps outside the Student Dining Room and a silent auction inside Fireside Hall.

Chau said the afternoon event is incredibly important and helps the students.

“Without the participation of the vendors and sponsors, this event would not be happening,” she said. One of Sharkes former students, John Surla, had a table at the event as well.