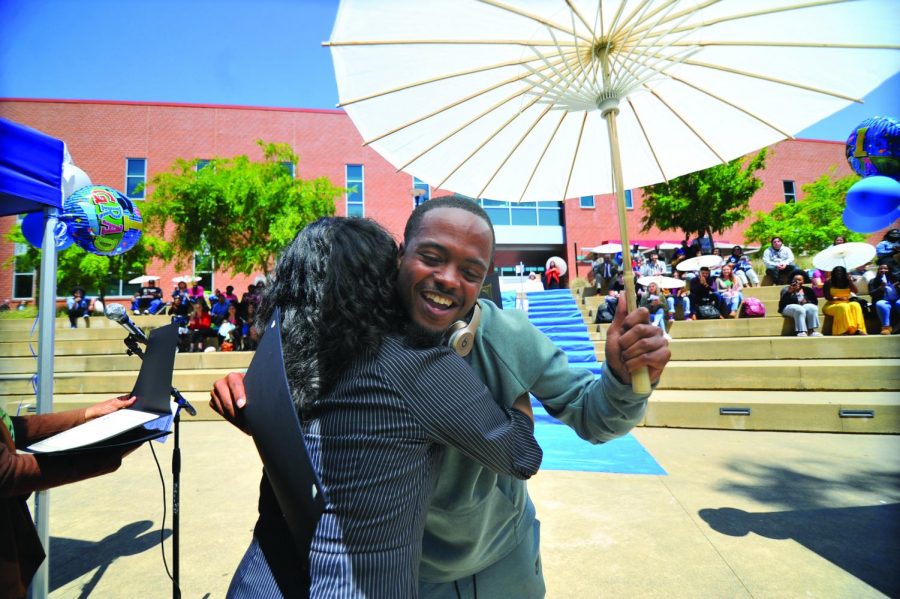 EOPS student Justin Harvey hugs counselor Dionne Perez during the 16th Annual Student Recognition Reception in the Amphitheater on May 8.

Family and friends gathered in the Amphitheater behind the Student and Administration Building May 8 to honor students receiving an associate degree or certificate of completion/achievement.

In the ceremony, EOPS/CARE and CalWORKs students received accommodations and were honored by Contra Costa College staff at the 16th Annual Student Recognition Reception.

EOPS/CARE and CalWORKs Manager George Mills said the ceremony is held to congratulate its students who received scholarships, associate degrees, certificates of completion/achievement and to those who plan to pursue educational or occupational goals beyond CCC.

“You are more than just students,” Mills said. “You are all parents, hard-working employees and family members.”

There were more than 140 EOPS students who received associate degrees and certificates of completion/achievement this academic year.

Before the event began, CCC staff provided paper umbrellas for those in attendance to counteract the blistering spring sun.

Mills welcomed honorees, staff, family and friends in an opening ceremony addressing how CCC recognizes the “grit” and “resilience” of its students, and also congratulated them all on a spectacular academic year.

“I felt like I didn’t have a place in the educational world,” Griffin said, “At Contra Costa College I was able to find my path in the world.”

Griffin acknowledged his academic struggles in a heartwarming speech.

“You are not just the future of this community,” Griffin said. “You have a role. You’re changing the stigma — you’re honoring those (community members) of the past.”

She said, “I was a high school dropout.”

Robinson reflected on her personal struggles in her academic journey.

“It doesn’t matter your situation,” she said. “Without EOPS and the culture, the people and the diversity (at CCC), I would not be where I am today.”

Following the speakers, the EOPS/CARE and CalWORKs counselors awarded students with certificates and EOPS embroidered stoles.

Students who received scholarships were given an additional certificate from EOPS/CARE.

Walker-Griffin said CCC has pride and people who know the world.