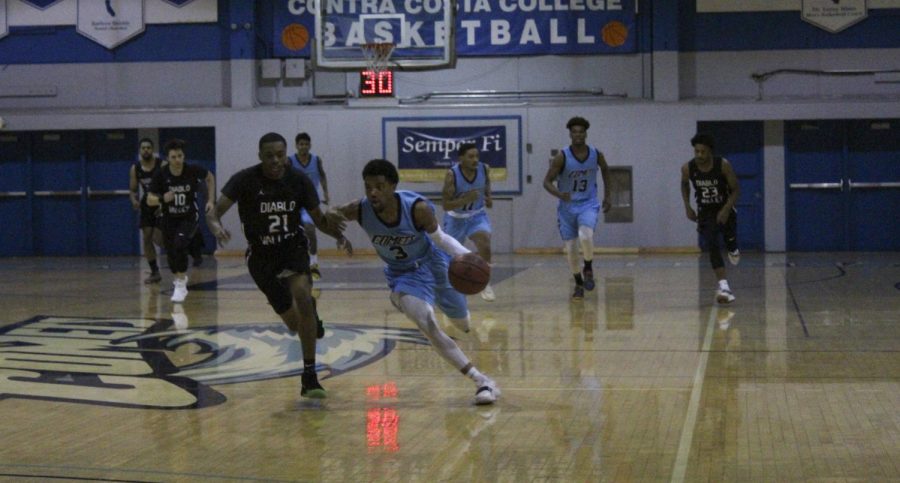 Comet guard Isaiah Attles has basketball in his blood and hopes to jump start his career playing in college. He hopes to become an architect one day.

The 2019 Comets men’s basketball team (13-15 overall, 9-7 Bay Valley Conference) will be forever defined by a failure to capitalize on a hot 5-1 start to their conference season.

A guard-heavy group anchored by sophomore guards Isaiah Attles and Evan Thompson relied heavily on speed and tempo to dictate the pace of the games.

Coach Miguel Johnson said that he felt the biggest strength for the Comets this season was their athletic ability.

“Our biggest strength was possibly our quickness, ability to shoot the ball from three”, Johnson said.

“We had a couple guys who were shooting in the high 40 percent from the field.”

The games that the Comets were able to play without being taken out of that style usually ended positively for the group.

According to Johnson, guard play with a focus on the wings opened up offensive opportunities to make plays.

“I think our (strength was the) ability with Eric Jones to create shots for those guys, with his ability to beat guys off the dribble.”

But a lack of a positive impact in rebounding the basketball came to bite the team in their 2019 campaign.

The Comets suffered six consecutive losses causing the team to fall from 5-1 to 5-6 from January into February.

Size was never a vocalized excuse for the Comets, but losing some of the team’s big men had an affect on their losing streak.

“Early in the year we had a lot of roster changes that made our team a lot smaller. Some of our big men that we relied on for a post presence were no longer with us after that original 5-1 run,” Attles said.

“I feel like we gave our best effort for the most part.”

In The Advocate article following their loss to Yuba College in which they failed to secure a state playoff berth, Thompson said the lack of size was nothing the team couldn’t overcome and was a matter of mentality.

Thompson said, “If we showed the effort, we felt like we could play with anyone.”

Johnson said rebounding is a state of mind although height can help.

“Although size can help, there needs to be a desire to be competitive on the rebounding side in my opinion,” Johnson said.

“I think with having such a young team I think that is why we just didn’t compete as hard as we should have on the glass with guys learning what it takes to win games in conference the second time around.”

After 12 games, big man Devante Ross, who had 54 rebounds for the team, left the team to go back home due to personal issues.

The Comets lost another big man, Raekwon Bush, early in the season after their initial season tournament at Las Positas College.

Johnson said, “He gave us a presence inside and was strong but he had some personal issues that were more important than playing basketball that he had to take care of.”

Looking to next season, coach Johnson hopes to build on the teams 9-7 record with four returning players and an influx of height for the Comets.

“We have a couple of guys already committed that give us some size on the wings”, Johnson said.

“We have a guy committed from American Canyon High School, 6’5”, his name is Sam Johannessen, we have (Athletic Director) John Wade’s son, John Wade III who is about 6’4” and can play the perimeter.”