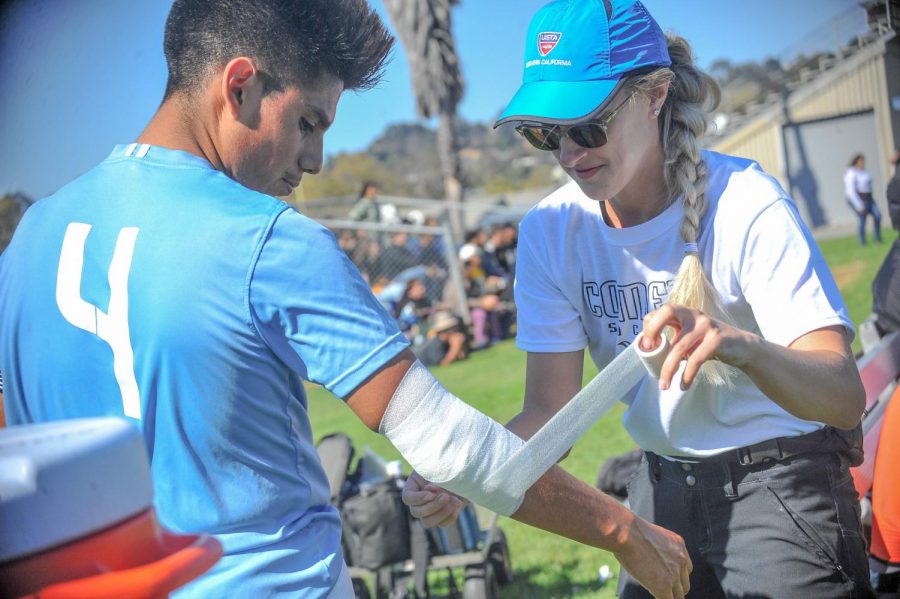 After months without a full-time athletic trainer and months after the initial opening was posted, the Contra Costa College athletic department has finally hired a permanent trainer in Lisa Martinez.

Martinez will replace trainer Nicole Oaks who was installed following the departure the previous full-time trainer Mykel Jackson in the spring of 2018.

Athletic Director John Wade said Martinez would begin work May 13 and that he looks forward to working with her because of her impressive resume.

Wade said the athletic trainer position was publicly available for any qualified person to apply for and that applicants went through same hiring process as any other facility member because CCC is a public school.

On campus, the hiring and interview process has three phases which feature committees comprised of different full-time staff members.

“Everyone had an equal opportunity to apply for the job, buts it’s not up to me to hire anyone,” Wade said.

Martinez previously worked for the College of the Redwoods and is a Cal State- Sacramento graduate. She received her bachelor’s in athletic training.

Along with working as an athletic trainer, Martinez was a research associate for Humboldt State during which she was part of the NCAA & Department of Defense Care Consortium. The program administers the NCAA-U.S. Department of defense concussion assessment.

The NCAA & DOD is the largest concussion and repetitive head impact study in history.

The NCAA and DOD funded the project launched in 2014 and now includes participants across 30 campuses.

Martinez was the concussion specialist for the California State University Office of the Chancellor from March 2017 to January 2018.

The trainer also has an instructional background working as a lecturer in techniques in the athletic training lab at Humboldt State.

“I learned about this job through word of mouth, from other people in the conference and my boss gave me a heads up about the opening,” Martinez said.

Martinez said she took the job because it will bring her back home because she’s originally from the East Bay. Martinez plans to create a culture that’s her own — one that will coincide with the culture CCC has.

“I want to create a new culture with the diversity CCC has,” Martinez said.

Some athletes were surprised and confused when Oaks left because many didn’t know she would no longer be assisting them.

“I’m heartbroken that Nicole (Oaks) left because she was part of the football team and we bonded with her,” McKelvy said.

Because she had a close relationship with Oaks, softball and basketball player Larrisa Carvalho also shared the same confusion as McKelvy upon learning of the trainer’s departure.

“I liked Nicole. I was in the training room because I iced every day after practice.”