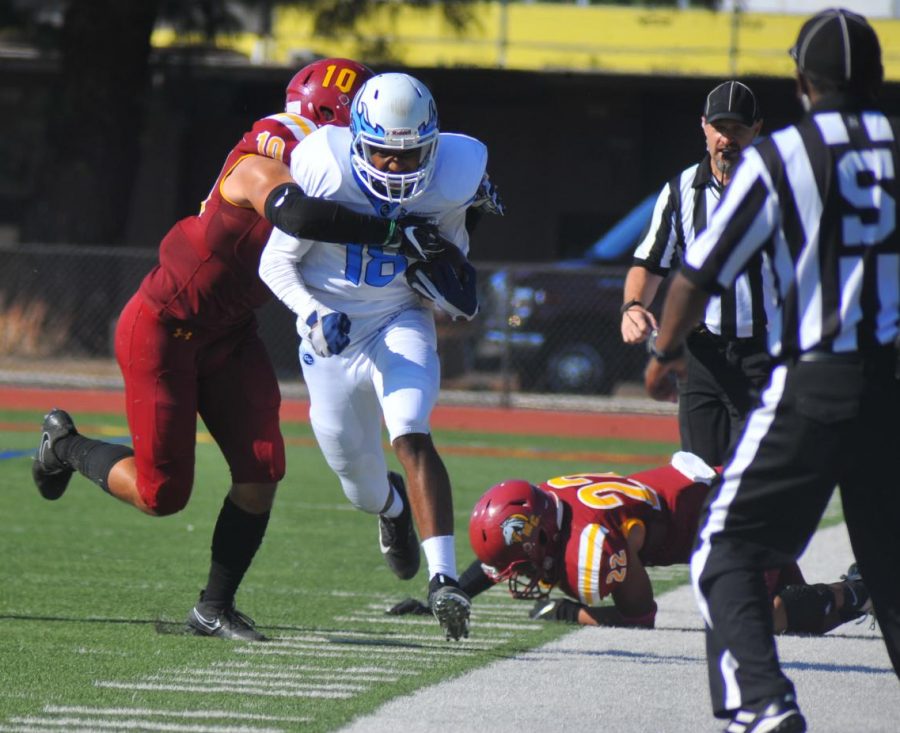 The first year in the American- Pacific 7 conference wasn’t what anyone involved with the Contra Costa College football team expected this year.

The football season began with a non-conference 38-6 home loss to Cabrillo College, which started a seven-game losing streak.

The loss contributed to a streak of 17 games without a victory which spanned two seasons.

Three of the first five games the Comets played were away against American-Golden Coast teams. CCC suffered losses to Monterey Peninsula College 65-12, College of the Redwoods 44-13 and Merced College 50-0.

In those early contests, the Comets lost by a combined 134 to 25 points.

CCC struggled throughout the 2018 season with inconsistency on offense, defense and special teams. The team had to deal with the absence of freshman quarterback Riley Lee during the season, which allowed fellow freshman Jaylen Tregle to step in for a three-game stint from week 2-4.

Tregle completed 17 of 28 passes and threw one touchdown and one interception against Monterey Peninsula College.

The quarterback also had a solid performance against Reedley College and completed 14 of 32 passes for 300 yards, three touchdowns and one interception.

Lee returned as the starter in October against Merced College and struggled mightily. In the contest he completed three of 18 passes for 11 yards with three interceptions and three fumbles.

Lee redeemed himself against San Jose City College the following week and completed 13 of 21 passes for 206 yards with one touchdown and one interception.

CCC’s first win of the season and first win since 2016 came Oct. 20 against Los Medanos College. The 41-6 performance was a victory that showed off what teamwork can do and what the three phases of football can produce.

The season continued with blowout losses to Foothill College, 41-13 and Yuba College, 40-6.

Football coach Patrick Henderson said winning every game continues to be the goal, even after a rough season.

“The goal doesn’t change,” Henderson said. “Everything we do is to win,”

Henderson said he wants the product on the field to reflect the culture of the team and plans on developing his players through football.

Assistant coach Alex Beglinger and Henderson both believe that everyone has expectations before the season.

Redshirt freshman Ky’on McKelvy said last season was tough for everyone involved, because of a lack of communication on the field.

The miscues led to missed assignments and big plays for the opponents.

“Sometimes the team would fight on and off the field,” McKelvy said.

“Everyone was trying to be an individual, but slowly we became a team towards the end of the season. We improved on the details, we worked hard and had more effort,” McKelvy said.

Athletic director John Wade said the 2018 football season was a tough one because the team never seemed to get on track, but not because of lack of effort.

“At LMC, we played well. It all came together that day,” Wade said. “You have to play perfect when you don’t have any (play makers).”

Wade said that 2019 would be a big year for the Comets because of the change in conference from the Bay 6 to the Pacific 7.

Henderson said the program isn’t looking for a shortcut to success and will continue to recruit students to CCC from local areas. Beglinger said there is no way to forecast the number of recruits CCC will have next year.

Henderson said at this point in the year he aims to have 70 players on the team, but plans to reduce the number to 60-70 players.