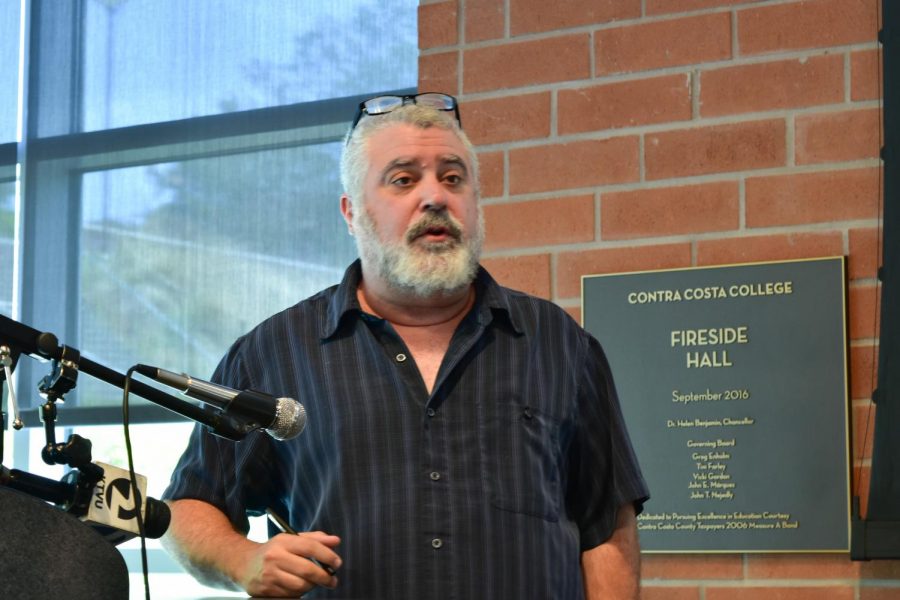 Following a tumultuous academic year defined by administrative upheaval, questions of transparency and the lack of a clear path to progress, recent decisions by Contra Costa Community College District Chancellor Fred Wood have left many in the campus community with more questions than answers.

In a campuswide email dated May 29, Dr. Wood made public his decision to place Contra Costa College President Katrina VanderWoude on administrative leave pending the completion of an investigation of a personnel matter.

Several African American leaders on campus believe Wood’s call to remove the only African American administrators in upper-management stands in stark contrast to calls for equity and inclusiveness in leadership presented to the chancellor by the African American Staff Association (AASA) over a year ago.

In response, the AASA held a press conference June 5 in Fireside Hall to address these concerns and offer a forum for administrators, community members and students to voice support for VanderWoude.

Former AASA President John Wade, also CCC’s athletic director, said at the press briefing, “(We) want to be clear in our support for President VanderWoude and look forward to reviewing the findings of the investigation and believe complaints or allegations may be erroneous or unfounded. Dr. VanderWoude has the support at Contra Costa College and in the community. We await the completion of the investigation to bring closure and clarity to this matter.”

Wood (who is white) wrote in his email, details surrounding the nature of the investigation could not be revealed.

“As with all personnel matters, I am not able to share the details of the investigations. I know these decisions leave a leadership void at the college and our district is committed to mitigating the impact,” Wood wrote.

However, United Faculty Vice President Jeffrey Michels, also a CCC English professor, offered the over 50 people in Fireside Hall insight into the purpose of the investigation and the process, which many who support the ousted administrators see as flawed.

“I was personally interviewed and was not admonished about telling anyone what I was asked,” Michels said. “One of the things that I was asked, and what I understood the investigation to be partly about, was if Dr. VanderWoude was prejudiced against older white women. I can’t imagine anyone asking that question if she had been a white man.”

Michels, who is also white, said, “The question to me was offensive on the face of it. The president of the Academic Senate (Beth Goehring) is a white woman and our vice president (Kincade), now on administrative leave, is a white woman. I’ve never seen Dr. VanderWoude be anything but gracious and charming with everyone with whom she has worked.

“At the core, it is quite appropriate (for the AASA) to question if there is something racial.”

VanderWoude and Anderson were the only African Americans serving in upper management at CCC.

The chancellor has been out of his office and unavailable for comment.

Despite the process to bring VanderWoude to campus having been conducted under public scrutiny, the process to remove her has been less than transparent.

Michels said, “I was part of the process that hired Dr. VanderWoude and that was a public process — she’s been placed on leave entirely in secret. I’m not even sure the people making the decisions know all the facts.”

This is not the first time Michels has been at odds with the tactics of Atkinson, Andelson, Loya, Ruud & Romo, the law firm the district uses to conduct its investigations.

He said the firm necessitated the only unfair labor practice complaint in his tenure with the UF, which was a direct result of district investigations and whether they give faculty adequate information before asking questions during an inquiry. Instead, the UF contends the firm uses tactics in an attempt to trip people up or trap them into giving muddled responses or contradicting themselves.

“We don’t think that’s how investigations by employers of employees should be handled,” he said.

An Employee Labor Relations Board agreed with all the UF complaints but investigations into the firm are still ongoing, Michels said.

He said there are similarities in the way many district investigations unfold.

“People, without having all the facts, say, ‘If the law firm is telling us that we need to do it then my hands are tied. I’m not making a judgment call, I’m just doing what I have to do to avoid a lawsuit,’” he said.

Michels said he believes there needs to be a communitywide conversation about how the campus moves forward and said, “If they appoint an interim president and vice president without dialogue with faculty and staff, I will personally lead the ‘no confidence’ vote that greets the new administrative team.”

The AASA believes Wood has made overt attempts to undermine VanderWoude by initiating two evaluations in violation of Section 6.2 of the 4CD Management, Supervisory, and Confidential Employees Personnel Manual (2004).

The first was conducted May 2, with a second administered May 14.

According to the AASA, this irregular deviation from the evaluation procedure is not in

accordance with administrative policy and was done solely for VanderWoude.

In the AASA’s opinion, the actions of Wood are inherently unfair and biased and cannot be justified.

Michels said, “Everyone is underestimating how traumatic this has been and is going to be coming into the fall. It’s very hard to second guess personnel decisions based on investigations where we don’t know all the facts.”

Aside from the campus community, students and the AASA, local charters of the NAACP have also been enlisted by those opposed to Wood’s decision in hopes of providing impartial third-party oversight to the investigatory process.

Willie Robinson, former president of Richmond’s NAACP chapter, said during the press conference, “We, at the Richmond branch stand in solidarity with the leadership addressing these apparent injustices being exercised through administrative action. We are joining this fight by bringing to the table the historic presence of local influencers and want to better understand why certain actions have been taken.”

Robinson also said this is a trend and a pattern that we see at more than just this campus and he looks forward to meeting with administrators and identifying the best way forward.

“We want to make the greater community aware of the impact these actions will have on a significant number of students, staff and population of the campus.”

According to Robinson, the NAACP will make itself available, not only to those who are directly impacted, but to the systemic cause that it believes to have led to the need for taking such drastic action. More importantly, he said the group will bring to bear efforts needed to elevate this to the state level as it proceeds forward and will assist with bringing legal advisement to the team at odds with the district.

Michels said aside from community leaders, a collection of faculty and staff also stand in solidarity with VanderWoude.

“Many of us have gone out on a limb to support the president in a way that I have not seen very much. We’ve really gone out of our way to make sure the chancellor and the Governing Board know that we support her and want her to have a chance to make this work,” he said.

Former CCC president McKinley Williams was also flummoxed by the district decision to place VanderWoude on administrative leave and supports the effort to bring clarity to the situation.

“I’m in total support of the efforts that our faculty and staff are making and I hope the district will see the error of its ways and straighten up the mess they created,” he said during the press briefing. “For them to think that they can do something like this on this campus where we have a history of serving the entire community is atrocious. They’re going to take the administrative heartbeat of the college out of the function of leadership — that is something that should not have happened.”

Members of the AASA do not see the decision to place VanderWoude on leave as an isolated incident, but as the latest in a string of affronts to campus community members of African descent. Over one year ago, the the AASA presented the chancellor with six areas of concern that negatively impacted the African American presence on campus.

To date, few of the concerns have been publicly addressed.

On the heels of the administrative changes, history, anthropology and geography department Chairperson Manu Ampim, who presented the information to the chancellor, wonders if Wood grasps the larger issue at hand.

“We want the Governing Board to take a critical review of Chancellor Fred Wood’s decisions over the past 16 months. The campus is at an all-time low and it happens to correspond with when Fred Wood became the chancellor in January 2017,” Ampim said during the press conference. “His decisions have led to the destabilization of the campus.”

Ampim’s request remains consistent with those made in previous meetings.

“We want diversity, equity and inclusion in hiring. Counseling STEM, upper-management at the president, vice president and academic dean level.”

“Diversity can no longer mean everybody except us,” Ampim said.

Retired classified staff member and current AASA member Michelle Jackson understands the connection educators at CCC should have with students and the surrounding community he also recognizes that connection becoming frayed.

“This campus community and culture means more to us than just a job or a paycheck. We grew up here. This is our community. Discrimination is not a word. It’s not what someone says to another. It’s an inherent practice and that practice is alive and well at CCC,” she said to people gathered for the press conference.

“This new management team does not have a clue about their job, this community and what it really means to discriminate.”

Students who attended the gathering also expressed frustration toward the administrative decision not to prioritize historically relevant courses.

As former president of CCC, Williams made the case most clearly: “We’re not a priority anymore. African Americans in West County or on this campus.”