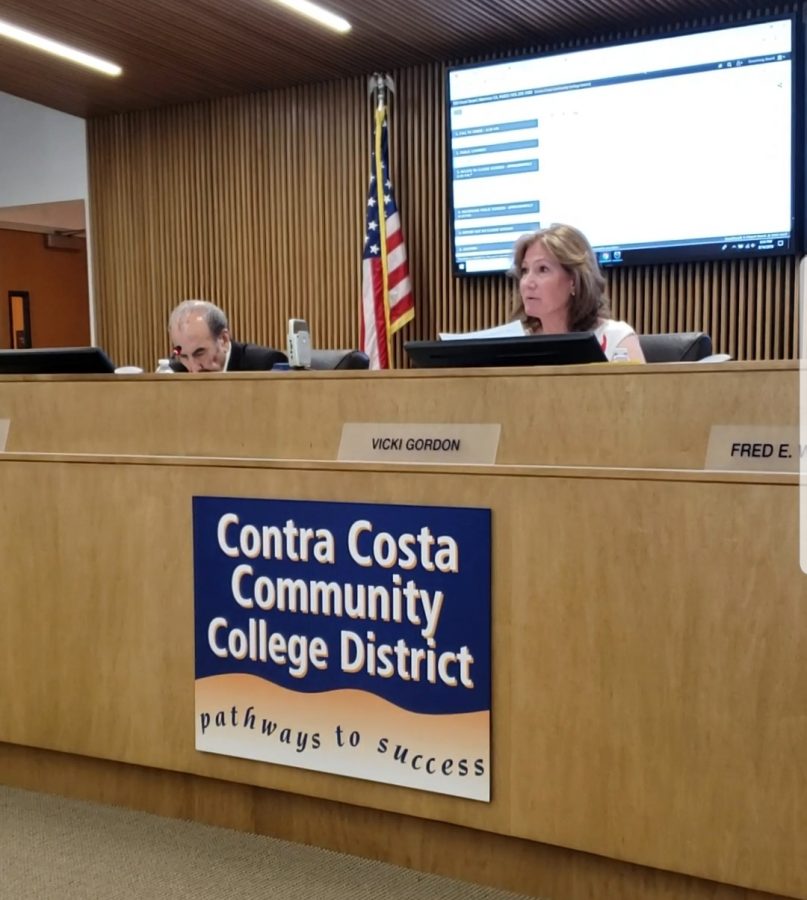 Governing Board President Vicki Gordon announces Dr. Katrina VanderWoude resignation during a special meeting of the Governing Board held on Aug. 14 at the District Office in Martinez.

After spending several months on paid administrative leave, Dr. Katrina VanderWoude and the Governing Board of the Contra Costa Community College District have reached an agreement that she resign as Contra Costa College president as of Aug. 14.

The decision was announced during a special meeting of the Governing Board held that day at the District Office in Martinez.

Dr. VanderWoude and her two interim vice presidents, Susan Kincade and Carsbia Anderson, were placed on leave May 29 pending an investigation of a personnel matter, district Chancellor Fred Wood said at the time.

Board Trustee Greg Enholm made a motion to accept the resignation agreement during a closed session of the board meeting on Aug. 14, and Trustee Andy Li second it. Three board members, Vicki Gordon, Rebecca Barrett and John E. Márquez voted in favor of the motion.

Gordon, who serves as board president, said VanderWoude will receive a severance package that includes the continuation of her $238,212 salary and health benefits for 12 months, and the payout of $19,216 of accrued and unused vacation time, as required by state law.

“The board thanks Dr. VanderWoude for her service to the college,” Gordon said.

According to the email CCC Business Director Mariles Magalong will continue her role as the college’s acting president in the near term.  Magalong, however, has a long-planned vacation abroad beginning on Aug. 23, so district Executive Vice Chancellor Mojdeh Mehdizadeh will step in while she is away or until an interim president has been selected and is on board.

Dr. Wood said in his email: “A committee of constituent leaders at CCC will be engaged to participate in a process to select an interim president. Please be assured that we understand the importance of having stability in leadership at CCC and we will work together to achieve that objective. We want to thank all of you who have kept the college moving forward during the past few months.”