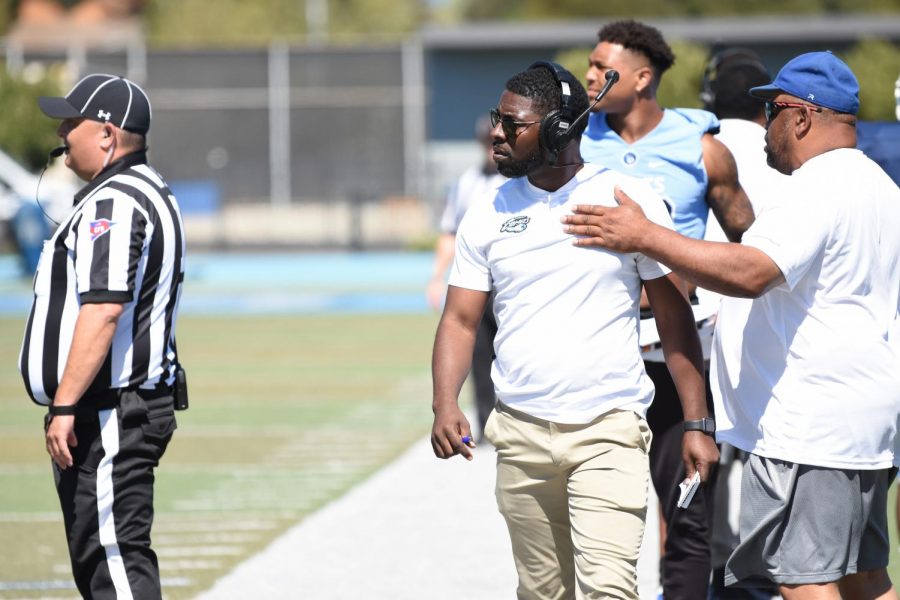 Contra Costa College coach Pat Henderson walks down the Comet sideline after a dispute with an official after a call against the Comets during the football team’s 48-10 home opening defeat at the hands of Monterey Peninsula College on Saturday.

A season that began with optimism because of a young coaching staff and a new group of players is beginning to lose its luster afforded by a fresh start.

The Comets (0-2) first game of the season ended with a 31-7 loss to Cabrillo College (1-0) Sept. 7 in Aptos. CCC’s running game struggled mightily versus the Seahawks defense and failed to compile any positive yards rushing and ended the game with -33 yards on the ground.

Through most of the game, Cabrillo showed its dominance scoring two touchdowns in the first two quarters and owning a 28-0 halftime lead. Cabrillo’s defense held CCC to only nine first downs and an 18 percent (2-11) third-down conversion rate in the season opener.

CCC played its home opener Saturday at Comet Stadium against Monterey Peninsula College (2-0). The team’s hard work toward improvement throughout the week did not carry into the game, and the Comets fell in a 48-10 shellacking.

The Comets allowed three goal-line touchdowns in the game. One of the three touchdowns was a quarterback sneak.

CCC’s woes were not only in defending the rushing attack.

Late in the third quarter, the Monterey Lobos scored on a 70-yard touchdown pass aided by a missed tackled by CCC. The Comets answered with a late third-quarter touchdown pass.

CCC will travel to Reedley College on Saturday, and the team’s next home game will be against College of the Redwoods on Sept. 28.