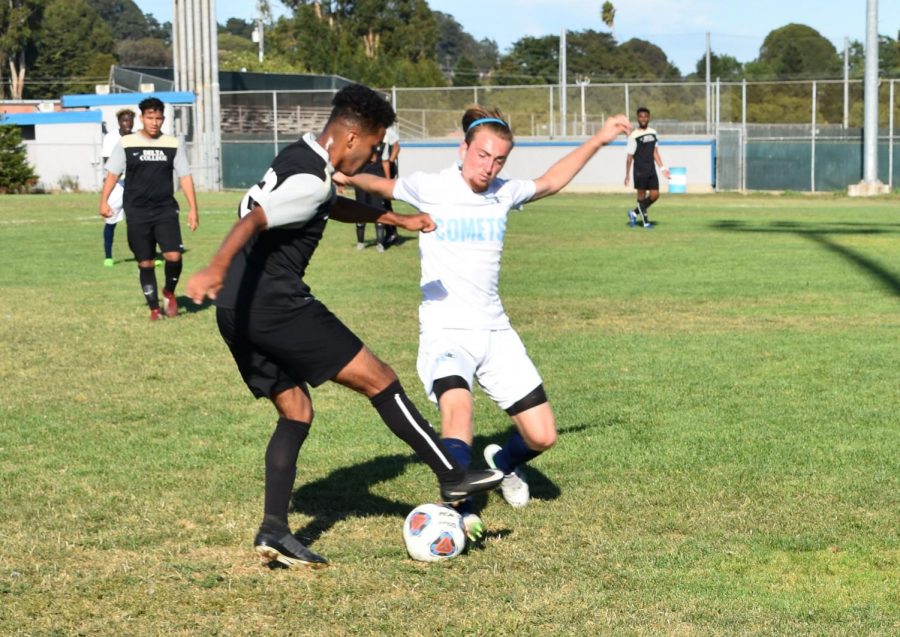 Comet player Nick Silva (right) fights for the ball duringa 6-0 blow out home loss to San Joaquin Delta College, the first of a five-game losing streak to start the 2019 season.

A new chapter in the Contra Costa College men’s soccer team’s (0-4 in the Bay Valley Conference) story did not forge the result anyone wanted as the team lost 6-0 against San Joaquin Delta College Aug. 27 at the Soccer Field.

CCC was thoroughly outplayed its opening game of the season which saw the reigning Big 8 Conference champion Mustangs pressing the Comets on every touch.
Delta (2-1 in the Big 8 Conference) made a concerted effort to pester CCC causing steals and effectively tiring out the home team.

“It’s easier to come out with a high press, especially since we knew they had fewer players on their team. It was part of the game plan,” Bradley said.

Bradley said his squad was well ahead of the Comets at the time, referencing the difference in number of available players.

“We knew they were a building program at the moment and have number problems. We currently have 23 players to their 14,” Bradley said.

CCC returns to action Friday against Butte College at 4 p.m. in Oroville.

The first half of the game was an indication of how the entire game was going to unfold as the Mustangs saw many chances to go ahead, beginning in the first five minutes of the game.

A good through ball pass shot through the Comet defensive backline forcing a good save from freshman goalkeeper Orlando Perez.

The Mustangs dominated possession throughout the first half and looked dangerously close to netting balls on every possession. The team attacked CCC on both sides of the field and missed two clear chances to score early on.

30 minutes into the game, the deadlock was broken. The first goal came directly from a Comet error, which allowed the Mustangs to have a clear opening at goal.

Perez came out of his line to attempt a save, but was unable to handle the ball, His position allowed a clear shot at an empty goal for Mustang midfielder Jesus Hurtado.

Comet coach Rudy Zeller said that the lack of options he had available didn’t help his team’s performance.

“We only had 12 guys, and one of them was hurt. We ran out of energy in the second half,” Zeller said.

The coach said he was proud of his team’s performance in the first half, but also realized the disappointment in the second half of the game.

“We received a shellacking in the second half and allowed soft goals,” he said. “The only place to go is up.”

The team returns to action Friday Sept. 13 against College of the Redwoods at 4 p.m. in Eureka.

CCC didn’t go down without answering and manufactured a scoring chance minutes before halftime.

The Comets pressed the Mustangs with a beautiful give and go pass, but a great shot from sophomore Elizier Musah just missed over the crossbar.

CCC ended the first half down 1-0, however, beginning the second half, the team quickly yielded a second goal.

Delta attacked from the right-wing and crossed the ball into the box which forced the CCC goalkeeper to take a misguided path to the ball to attempt the save.

This allowed Mustang midfielder Toby Penawebb to head the contested ball in for a goal.

Throughout the game, CCC struggled with the Mustang’s high press but did create a chance with nothing to show for it.

The mustang’s third goal came off another loose ball allowed by Comet goalkeeper off a free kick.

Late in the game, the comets fatigue showed when they allowed a brilliant solo run from Mustang forward Miguel Armas. Armas’ shot hit both posts and deflected straight to oncoming teammate

Matthew Salas to give his team a 4-0 advantage.

The Mustang’s final two goals came in the last five minutes of the contest. The fifth goal came from a misjudged ball by Comet defender Angel Ron while the sixth and final goal from a cross into the box.

Delta finished the game with 18 shot on goal doubling the Comet’s nine.

Comet forward Elizier Musah said the team’s fitness level is not where they want it to be.

“Our second half fitness level was not there,” Musah said. “We left a couple of goals out there, but we don’t have enough players to show that we have a good team.”

Freshman defender a Brandon Barajas said his team played wounded because of the low number of players.