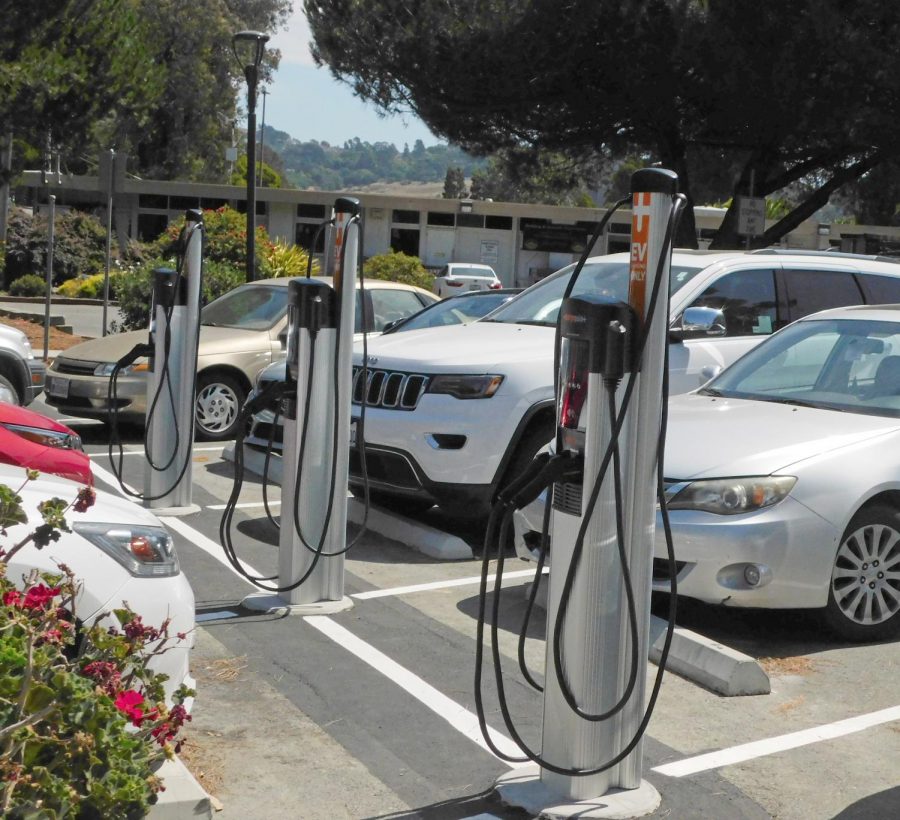 Six electric car charging stations were installed during the summer in Lot 9.

In an effort toward lowering greenhouse emissions in California, state legislators set a goal to have one third of California’s vehicles be Zero Emission Vehicles (ZEVs) by the year 2030.

“The goal is to have five million Zero Emission Vehicles (ZEVs) and achieving these goals will have a huge impact in reducing greenhouse gases,” acting liaison between contractors and the Contra Costa Community College District James Eyestone said.

According to the California Resources Board, “Forty-one percent of emissions are due to transportation.”

Since January 2018, grants have been made available to help former Governor Brown’s legislative agenda be met.

In a push toward achievement of this goal, Tracy Marcial, district energy and sustainability manager worked with PG&E and Bay Area Air Quality Management District (BAAQMD) who provided grants to install electric charging stations for vehicles at the three district college campuses.

“She is working a deal for Diablo Valley, Los Medanos and Contra Costa colleges, so we can all have access to these,” Buildings and Grounds Manager Bruce King said.

At Contra Costa College, there does not seem to be high demand for the charging stations. A survey conducted among faculty and staff found that in Diablo Valley College there was a higher demand for charger installations.

Automotive SVS Representative Lucille Beatty said, “As far as automotive, that is where we are heading.”

Library department Chairperson Andrew Kuo said, “I have counted at least six (charging stations) on campus, but more than that I do not think are necessary. I’ve only seen maybe four more staff members besides me who own an electric car.”

Kuo said, “I do not have such a long commute and my Nissan Leaf charges at a level 1, which is at 120 volts. That provides 5 miles per charging hour.”

He also said PG&E has “Electric Vehicle rate plans” that help customers manage what effect charging a vehicle will ultimately have on billing.

Eyestone said, “This construction project is valued at roughly $203,000 and the college will be providing local funds to cover roughly $20,000.”

The other $183,000 is covered by PG&E who paid the infrastructure cost and BAAQMD, which covered the installation.

“Since PG&E follows a formula of dollar/plug that they are allowed to spend, a minimum of six electric charging stations had to be installed,” Marcial said.

According to King, the electric charging stations should be ready by Saturday. In the meantime, anyone with a parking permit can still park anywhere in Lot 9 (including at the charging stations).