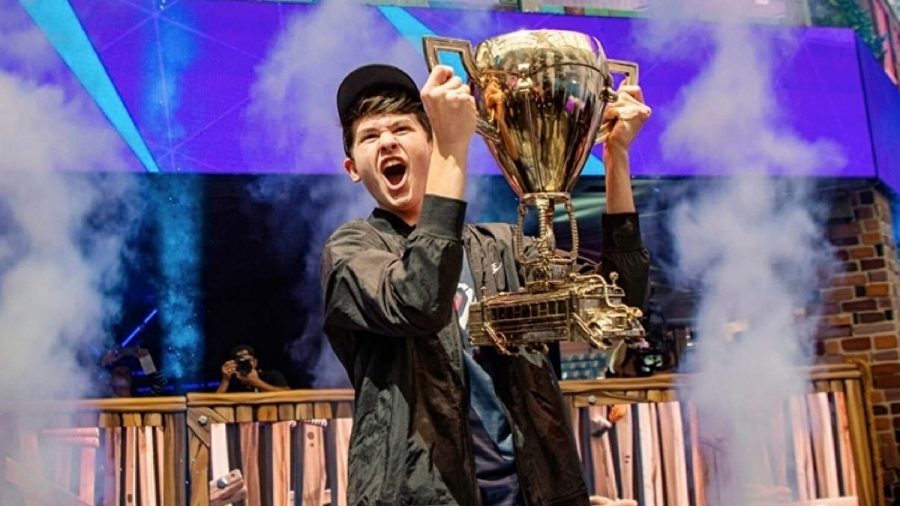 Kyle “Bugha” Geirsdorf is awarded $3 million after winning the Fortnite World Cup this past summer.

Kyle “Bugha” Geirsdorf took home $3 million for his World Cup victory and his noteworthy earnings opened the eyes of the general public to just how large esports has grown from its humble beginnings at LAN parties across the world.

The Fortnite World Cup was a culmination of months of trials with 40 million gamers trying to qualify in the top 100 for the World Cup. In late July, gamers from across the globe made the pilgrimage to New York for competition at Arthur Ashe Stadium.

At the time, the World Cup had the largest prize pool in esports history at $30 million distributed among the competitors.

First place in the solo and duo categories won $3 million, while second-fourth places earned over $1 million.

The prize money was trumped later this year by DOTA 2’s biggest tournament, The International in Shanghai, China, with a pool of $33 million.

The prize pool is funded by Epic Games, the developers of “Fortnite,” which accumulated $2.4 billion in revenue in 2018.

All World Cup qualifying players took home no less than $50,000 of the prize money just for showing up.

Epic Games invested $100 million into tournament prize pools for competitive “Fortnite.” The gaming giant is putting serious cash behind its game’s esports scene and so far, their investment is paying off.

Giersdorf’s victory made headlines across the world and he found himself on “The Tonight Show” and “The Today Show” making appearances for his victory lap similar to Super Bowl champions.

“Fortnite” is already a wildly successful game without taking into account its competitive scene.

Its cross-promotion with major EDM artists like Marshmello, and RL Grime and pro-am tournaments with the likes of NBA players Josh Hart and rapper Nav, are major successes tapping into audiences that aren’t normally into gaming.

Their esports division is another way to grow “Fortnite” by tapping into the emerging esports scene.

However, their reputation in the community and lack of experience are rubbing fans and “Fortnite” stars the wrong way, which makes for an uncertain future.

Epic Games is notorious for introducing updates into games before big tournaments that its competitors had no opportunity to practice with. In addition, early “Fortnite” tournaments, like its

Epic Games as a publisher has learned from some of its early mistakes but the update problem still exists with the recent B.R.U.T.E Mech mechanic, which was universally panned as being unbalanced and completely warped the metagame around it.

As Epic Games continues to invest in its esports scene, consistency and timing of updates has become increasingly crucial toward maintaining competitive integrity and keeping players and fans happy.

While Epic Games can fix technical issues relatively easily with how it handles competitive “Fortnite,” their largest hurdle is fighting against the stigma toward its signature game in the esports community.

Journalist Arran “Halo” Brown said “Fortnite” has to work harder to gain respect in the esports scene because of its rapid rise and the nature of Fortnite battle royale competition.

“If you look at every big esport right now, they have scenes that have built up over time and that’s taken years to attain. The Overwatch League is probably the only exception to this but even they took a few years. ‘Fortnite’ blew up in the first instance and for them to then have that huge prize pool, I think there was possibly some jealousy because of how quickly ‘Fortnite’ made it,” Brown said.

He said the community also looks at “Fortnite” differently because of the perceived random nature of “Fortnite’s” 100 player free-for-all.
“There is a huge tactical aspect to it that a lot of people outside of ‘Fortnite’ don’t understand. I believe the other esports believe it’s more luck than skill based, which is obviously not true,” he said.

The meteoric rise of “Fortnite” has led to the game feeling like “new money” having to fight for respect among established fans who view “Fortnite” esports as a cash grab rather than a natural, symbiotic member of the esports community.

Despite the myriad of obstacles in the way of competitive Fortnite’s success, Epic Games has made one move that shows its commitment to investing in the long-term success of its esports scene.

In May 2019, Epic Games hired then Overwatch League commissioner Nate Nanzer to head their esports efforts.

The hiring of Nanzer, who was previously running one of the more successful esports leagues with big-name sponsors and salaried professional gamers, was a sign that Epic Games was seeking stability after their early experiments and rough patches.

Brown is one in a network of esports reporters who see a path for “Fortnite” to become a staple in the esports scene.

“The World Cup showed that ‘Fortnite’ fans want the hype of big tournaments, so going with a tournament format with two majors and a World Cup look to be the way forward for the ‘Fortnite’ franchise.

“As long as Epic listens to the community and as long as they have a good handle on what the casual fan base wants in the game, they could be the big esport in the next three to four years,” Brown said.