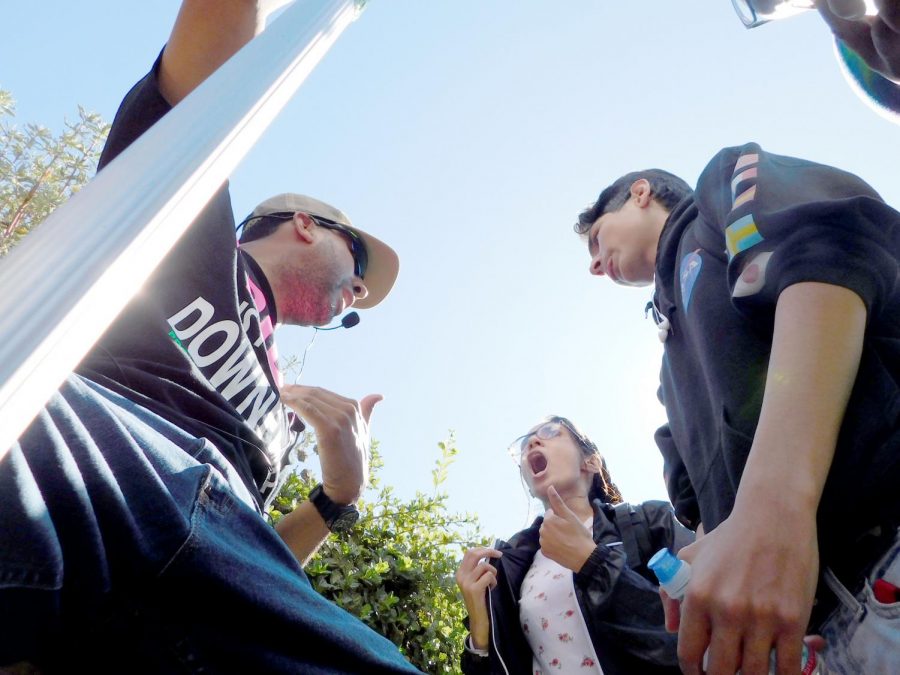 A religious demonstrator (left) who refused to give his name argues with students in the Campus Center Plaza Monday.

As students filed into Campus Center Plaza Monday morning after early classes, they were greeted by a lone demonstrator expressing hate toward students from backgrounds he deems unacceptable.

Christianity, weaponized by a religious outsider armed with a mobile public address system, incited a war-of-words with students and faculty.

A man, who only identified himself as “Preacher of God” from a Baptist church organization, arrived on campus with a sign that read there would be eternal damnation for, among others, loud women, pot smokers, LGBTQ+ people and sport nuts.

Nick Nian, who has yet to decide a major, was among the dozens of students who confronted the religious speaker.

“Because I said to him that the Bible was re-written, he called me Satan,” Nian said.

Nian said the theology the man was spewing is not the word of God, but instead it is sexist, racist and hateful. There is a way to reach people, but the way this speaker did it turns people off to religion.

“His purpose might have been to preach love, but all he brought was hate,” Nian said.

And like the other students, Nian worries that the rhetoric spread by the Christian demonstrator will fuel hateful acts against the LGBTQ+ community and other minorities.

The Southern Poverty Law Center (SPLC) has categorized some Baptist Christian denominations as hate groups because of their anti-LGBTQ+ speech.

One preacher, Steven Anderson of Temple, Arizona, has even gone viral after celebrating the June 2016 Pulse Nightclub massacre and calling for the execution of LGBTQ+ people, according to the SPLC.

Beatty, who holds a master’s degree in religious leaders in social change from Starr King School for the Ministry, tried to drown out the speaker with a bullhorn and chants.

She said she saw the need to support the students who were there because the speaker’s theology was unsound, and also because students should know that there are faculty who have their backs.

“It is important to stand united against hate,” Beatty said.

Police Services officers were on scene in case any confrontations got physical, Lt. Thomas Holt said.

Art major Taelur Featherstone felt frustrated because the campus police were not able to escort the speaker from the campus.

The religious demonstrator was accompanied by a female videographer who recorded interactions between him and the students.

Featherstone and other students felt uneasy about the woman shooting video and stood in front of her camera to block her view. She said the woman pushed her.

She told Police Services, but Holt said the woman claimed she was the one being pushed, not the student.

Featherstone, feeling unheard, called the San Pablo Police Department to see if they could help get the speaker and the woman recording off the campus. While on the phone, SPPD referred her to

Police Services and Lt. Holt — who was standing in front of her.

“I feel angry because the campus police were laughing at me for feeling unsafe,” Featherstone said.

The art student wished there was something that could have been done to keep the peace. However, with the religious demonstrator allowed to stay as long as he wanted, there would be arguments, she said.

CCC is one of the many college campuses the speaker claims to have visited.