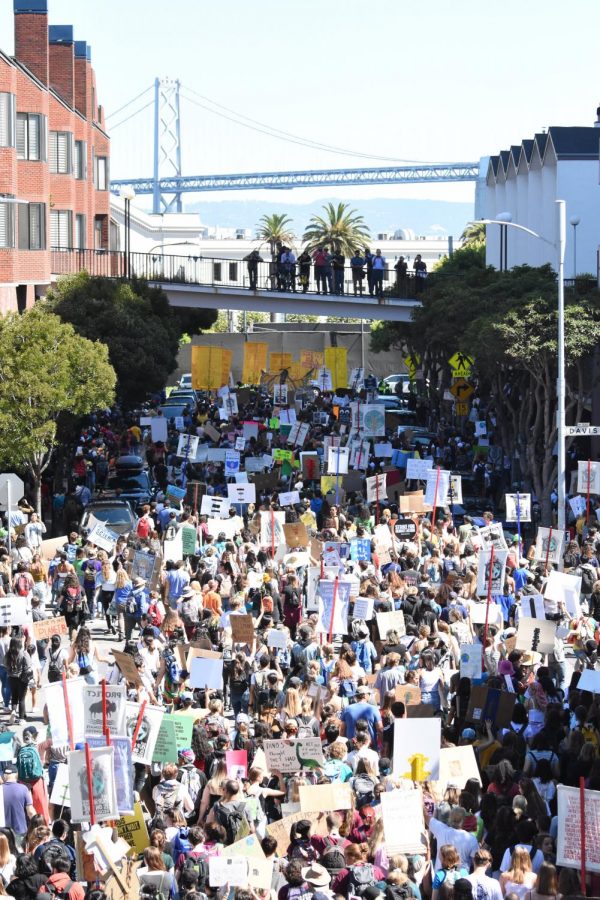 Around 30,000 people marched in San Francisco as part of an international protest over climate justice on Friday.

Young activists’ call for education and legislation promoting climate justice was expressed through international protest united behind a common mission to energize the uninspired.

On Friday, thousands of people participated in the Global Climate Strike. A seven-day international climate change protest led by youth began through myriads of marches and rallies around the world.

One movement that builds locally on what began last week is the Sept. 27 protest at 6001 Bollinger Canyon Road — the Chevron Refinery headquarters in San Ramon.

Contra Costa College serves people of color who struggle financially and it is up to the administration to advance the conversation of climate change, he said.

“Instead of following a course lecture, teachers should be more practical and get students to get involved in (climate justice) movements,” he said.

Because of fire and drought, Contra Costa College and the district should push harder for climate justice, Shreejal said.

Failing to recognize the urgency of this issue shows the disconnect between the student’s reality and administrative priorities.

“In the future, human life will not be as sustainable as it is right now and resources will become scarce,” Shreejal said. “That will mean prices for water and food will go up and the ones that will be able to afford resources will be higher class people.

“We have to take action now,” he said.

In the Bay Area, around 30,000 people marched from the San Francisco Federal Building to Embarcadero Plaza.

Along the way, marchers stopped to chant near different buildings like the Bank of America Financial Building and the PG&E building, along the way.

Thousands carried signs and the long line of protesters chanted various chants simultaneously throughout the line of marchers. Some signs read, “I am studying for a future that is currently being destroyed” and “You will die of old age, I will die of climate change.” And protesters chanted sayings like ‘Stop denying our planet is dying” and “Climate justice is migrant justice, migrant justice is climate justice.”

Elementary- to college-age students ditched classes to attend the rally.

“I am here because there are hurricanes, forest fires and droughts. Things are only going to get worse,” Arias said.

Arias is undocumented and can’t vote, but she can vote with her voice, she said.

She hopes that her activism can inspire others to promote laws that support clean air and anti-pollution policies.

“I am here to let you know there is hope and that we will deny silence.”

The mission of the young activist is to educate the public about climate issues, especially calling on the California State Teachers’ Retirement System (CalSTRS) to divest $6 billion from fossil fuel investment.

Co-founder of the Earth Guardians crew of the Bay Area, Rio M. said, “They are trying to silence us, but they will not.”

Rio and the other young activists from his organization extended a banner with the website fossilfreeca.org/petition and urged the crowd at the Embarcadero Plaza to share a photo of it with as many people as possible.

“We want to show them we are watching,” Rio said.