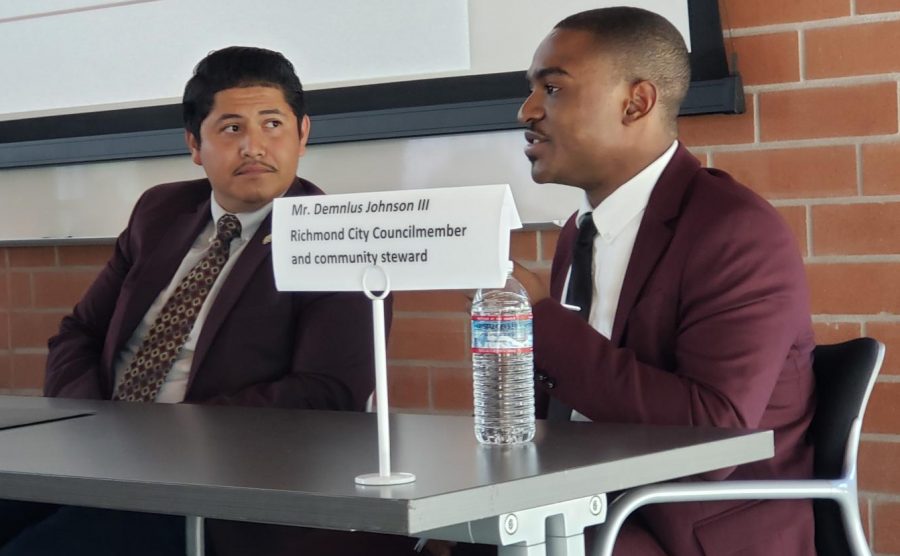 This year’s Constitution Day event was hosted by the Community Organizing and Political Action (COPA) club and the political science department in celebration of the life and legacy of former San Pablo mayor and Contra Costa College political science professor Leonard McNeil.

McNeil died on April 14 of this year after battling cancer.

Constitution Day is mandated by Title IV funds and is an event that takes place at colleges across the nation.

Nearly 100 students gathered at 3 p.m. in Fireside Hall to interact with a panel of four local role models and agents who work to better the lives of communities in West Contra Costa County.

“Constitution Day was just an opportunity to raise awareness about politics at all three levels of government — national, state and local,” Gonzales said.

Sloan led the conversation by saying that McNeil was an activist who served as a mayor and was committed to social justice.

“Leonard (McNeil) and I always had the intention to give back to the community,” he said.

“Youth from the Richmond community are usually considered deficits not assets. That is the reason the RISE Center recognized their creativity and their power and need to be heard,” she said.

Pineda was born and raised in San Pablo and said he plans to continue McNeil’s legacy by representing minorities on the City Council.

“McNeil encouraged me to go to college, get a higher education and then go back to the city of San Pablo to help the community,” he said.

Demnlus encouraged the audience to begin activism by joining small committees in their own neighborhoods.

“I had the pleasure to meet Mr. McNeil in a committee meeting and he was eager to get involved. He was instrumental in my career because he inspired me to join the City Council,” he said.

The event was catered by CCC culinary department, ensuring that guests were able to enjoy a variety of appetizers, such as tomato bruschetta, chicken wings and fruit.

In the second part of the event, students were able to have a group conversation with the panelists and have their questions answered.

Gonzales said, “Activism doesn’t just wait for someone to come and tell you to do certain things. People must chase down the information and the tools they need.”

During the event, Dr. Carmen McNeil announced the addition of a new scholarship to the Contra Costa College Foundation in honor of her father.

“The McNeil family is really pleased that we now have the Leonard McNeil Social Activism Scholarship. It is a $1,000 grant for a current CCC student,” she said.

“At one point, we didn’t even have enough space to pull out more chairs for all the people who had shown up,” Angulo said.

“I’m so proud of how the event turned out and the effort that the new members of COPA put into making this a success.”

The event concluded with an open invitation by COPA President Elishes Cavness to join the club and to keep participating in future events.