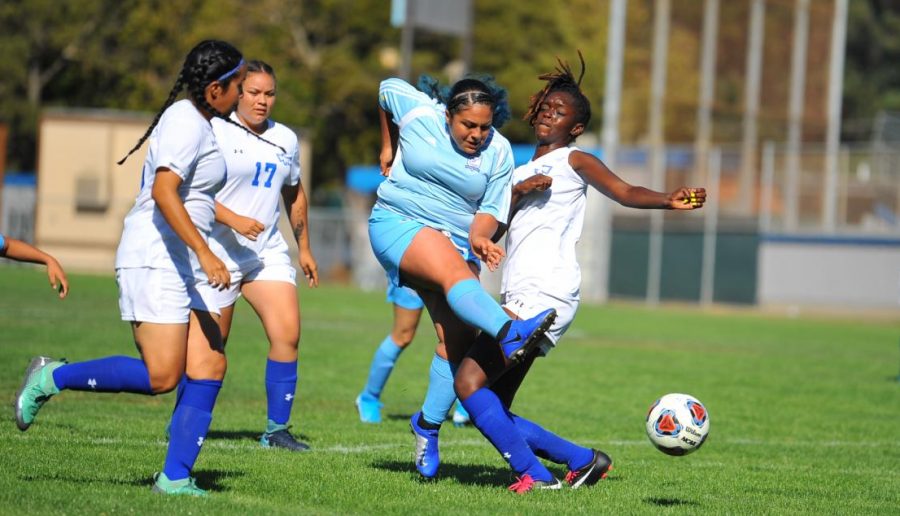 Defender Abigail Plascencia (left) shoots for goal as a Merritt College player bumps her during the Comets’ home opener on Friday on the Soccer Field.

Despite its biggest offensive output in the past five seasons, the women’s soccer team (0-1) lost a 5-3 shootout to Merritt College (1-1) Friday at the Soccer Field.

The Thunderbirds dominated the first half of the game and scored their first goal, by Anashea Custard, in the 30th minute.

In an attempt to keep pace in their first home game of the season, the Comets returned fire in the 44th minute, tying the game at 1-1 in the process.

“This is a resilient group,” women’s soccer team coach Ted Steen said “We are very supportive of one another and we have come a long way. We have more room to grow. Everyone’s mentality is spot on and I’m very proud to be their coach.”

The team returns to the field Friday to face Los Medanos College at 2 p.m. on the Soccer Field.

Entering halftime tied at one apiece left many of the Comet players with smiles on their faces. However, their joy was unsustainable as Merritt scored four goals in the second half.

The Thunderbirds’ most effective strategy was to dominate the game by playing in the Comets’ territory.

Even though some Comet players were playing for the first time in their lives, they were able to make a comeback and dominate moments of the game.

The Comets began to realize this after the second goal of the game was scored in minute 77 by captain Noemi Gomez.

“At the beginning of the game, it was tiring and frustrating playing with each other for the first time,” Gomez said. “But as the game advanced, we learned to be patient and it paid off.”

Scoring for Merritt came in bunches with three of four of their second half goals happening in a 10 minute span between the 51 minute mark and the 62 minute.

However, the Comets scored the final two goals of the contest by netting shots at the 77 and 82 minute marks.

Steen said, “The team was able to regain its confidence because they know they can rely on each other. A lot of it comes from good communication and giving each other confidence.”